The announcement of a new or an improved SUV is nothing new these days. But when a company such as Lexus announces that they’ve made substantial changes to one of their models, we all stop and take a look, even if it is “just” their SUV model. Chances are that a lot of the equipment fitted to current Lexus models will later find its way into our daily drivers, so taking a look now is worth doing. The 2016 Lexus RX has been extensively redesigned so without further ado, let’s take a look at what’s changed.

Let’s start with the most noticeable thing first. It’s been given Lexus’ current styling vision bringing it closer to the rest of the lineup. The massive front grille is immediately striking and is by far the most obvious exterior upgrade. The SUV is more car-like than ever but hasn’t lost its uniqueness. It’s bold to look at, but not overly aggressive. Not every person that takes a look at it will like the styling, but at least, it’s different and doesn’t adhere to already defined patterns to how an SUV should look.

If the 2016 Lexus RX seems bigger, that’s because it is. It’s not just re-styled but fundamentally changed. Its wheelbase is much bigger and the overall car length has been increased, granting a much larger cabin. All of that space mainly went in the back where it’s much more comfortable for passengers sitting in the rear seats now.The overall impression is that the RX is much closer to its car cousins than most of the SUVs in its segment are. It feels and looks like a car, but there’s room in abundance just like in an SUV. The roofline is sleeker but incredibly it doesn’t sacrifice any rear headroom, something that proved to be a problem for most SUVs which tried to be stylish. 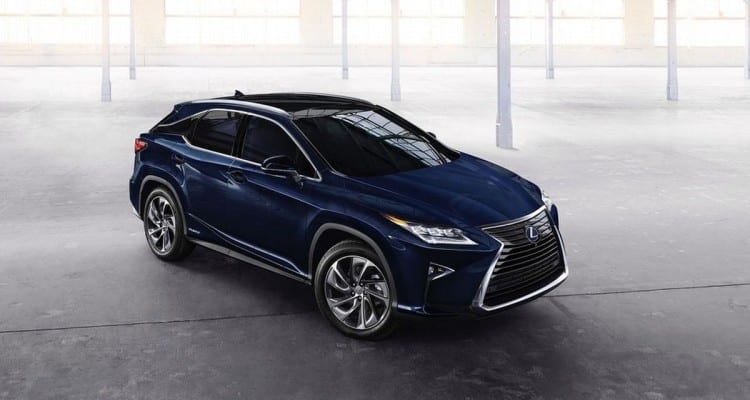 The seating position is lower and that contributes to the car-like feeling too. The dashboard and all elements in the car are located a bit lower and the commands are angled towards the driver for easier control. It’s a really awkward feeling at first but you will get used to it quite quickly. The RX manages to combine all of the pros of owning an SUV with the pros of owning a normal car like a sedan or a limo.

It gives you great visibility and commanding position compared to other cars, but, it doesn’t feel like you’re sitting up high. The seats are snug and you fit right in them, rather than sitting on top of them. Everything looks absolutely beautiful and the fit and finish are next to none. The attention to details is amazing and beats even most luxury limos. The competition has nothing on the RX, not even the Acura MDX can take a clear win in this segment. 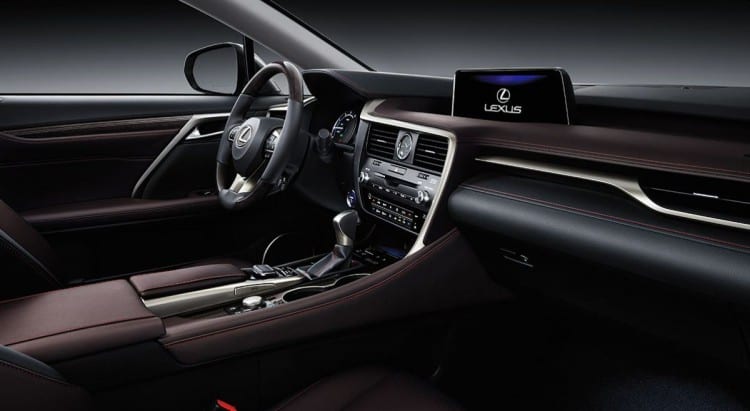 Sitting position is perfect and all of the controls are laid out in front of you. Most of the ones you’ll be using often are found on the steering wheel which is very soft to the touch thanks to quality materials, and the two-tone cabin feels even more expensive than it really is as if that was possible.

The sacrifice in all of that second-row leg and roof room is obvious when you open the boot. Cargo space is 18.4 cubic feet or 56.3 cubic feet if you fold the seats, compared to competitors it lacks a lot but still that is the price we need to pay for great looking SUV. Because the seats are a 40/20/40 split, however, they don’t fold totally flat and not all of that cargo space is usable. Bulkier items can’t easily fit into the back, not that anyone owning an RX would try to fit a lot of stuff in the back of it. Sadly there’s no choice of a third-row seat, let alone seats. There simply would be no headroom even for children. Bad marks for the RX there, because both the XC90 and the MDX have it. 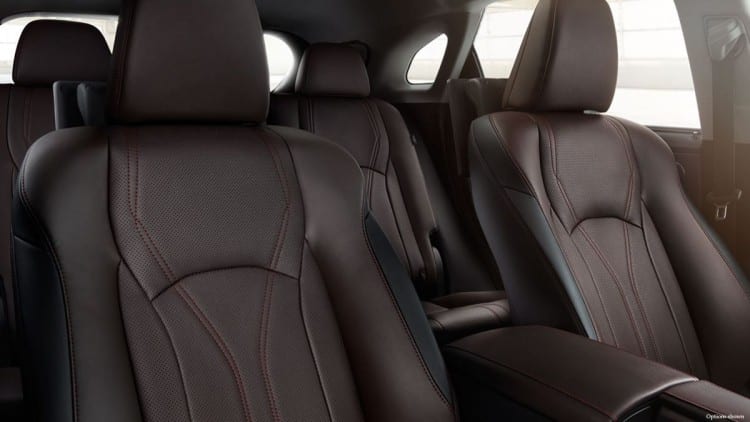 Engine and Transmission of 2016 RX Lexus

The 2016 Lexus RX comes with a 3.5 liter V6 as an only standard option. It develops a more than respectable 295 horsepower and 267 lb-ft of torque. And the best news? It’s fitted with an eight-speed auto instead of the dreadful CVT. Front-wheel drive is standard just like other cars in the segment, but there is an option of an all-wheel-drive system on the F Sport. Beware, however, the F Sport’s seats are narrower and larger people might not be comfortable in them.

The 0 to 60 miles per hour time is 7.4 seconds which is reasonable considering how much it weighs. It’s more than adequate and just below the standard for a luxury SUV. It’s also capable of pulling a decent amount of weight at 3500 pounds, a lot more than other luxury SUVs. It returns 23 miles per gallon on the combined run and 22 if you choose the all-wheel-drive system.
If you want you can also get the hybrid 450h version. Same 3.5-liter V6 unit will be combined with an electric motor that is supplied from nickel metal hydride battery pack and together can produce 308 hp meaning that it offers slightly more power than the standard version but then again it also comes slightly heavier. The addition of the hybrid system reduces fuel consumption and you can expect it to return 31/30 mpg, a nice jump over the standard model. 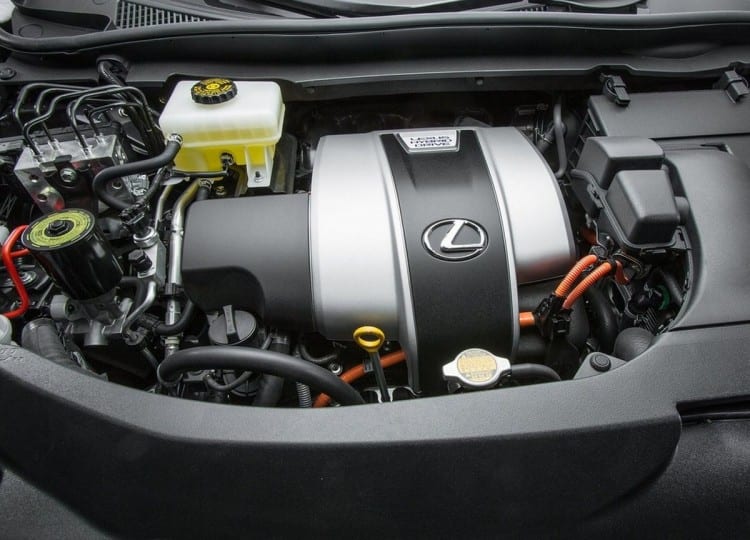 Because it’s a Lexus, safety systems are of the newest and highest caliber. Stuff like ABS, stability control, and traction control are standard for the RX. There are airbags scattered around the entire car and a rearview camera paired with Lexus’ Enform Safety Connect system. If you get in a car crash or your car is stolen, you’re covered because the RX can inform authorities of the crash and has a car locator which can track your vehicle’s whereabouts should you not be the one piloting it.

There are optional safety features which most RX customers will probably go for. Blind spot warning system and the Lexus Safety System + can be specified. The package adds cruise control which is adaptive, front collision warning and a mitigation system which automatically applies the brakes should it sense imminent collision in an effort to reduce consequences. 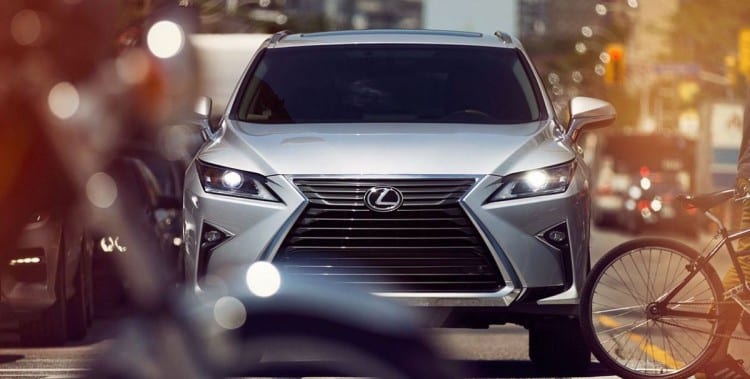 The RX doesn’t disappoint. No matter which of the two trims you go for, whether it be the regular or the F Sport, it performs flawlessly. There’s an RX 450h on offer too but that’s listed as a separate model and not a trim in some articles but we still decided to include it here since it is pretty much identical to a standard version. Prices start at about $42,000 for the base version and $52,250 for 450h model, and we expect more units to be sold than the old one. It’s better looking (our opinion), the interior is definitely much more sophisticated and the tech onboard is class-topping. It’s still the definitive luxury SUV in our book.