Lamborghini has always produced the definitive poster-cars. The company’s vehicles have captured the imagination of people everywhere, and it all started with the Miura and Countach. The ultimate wallpaper vehicles that every small boy had to have. The infatuation in Lamborghinis only grew as people get older. It never seemed to fade away.

With the Gallardo and Murcielago, Lamborghini cemented their position in the world as a top supercar manufacturer. Both of these models were great hits, but the Gallardo was getting a bit old after being for 10 years in production. So in 2014 Lamborghini’s most popular model was replaced with the Huracan, a car that immediately inherited and surpassed the Gallardo’s success.

The Huracan was first introduced as a coupe, and now, there’s a new version. The drop-top, 2016 Lamborghini Huracan LP-610 4. Finally you can enjoy the thrills of open-air driving in style with this new model. In the past, people looked down on convertibles due to the fact that they weren’t as stiff or structurally strong as the coupe counterparts. In recent years, this has become less and less of an issue as materials and techniques have gotten better. We’re now at a point where a convertible is just as strong as the coupe thanks to materials like carbon-fiber.

First, let’s get the name out of the way. The Huracan is obviously the model name. LP stands for “longitudinal posterior”, which is indicative of the north-south or mid-engine layout. Number 610 is, well, pretty self-explanatory because it’s the number of the horsepower, and the 4 at the end suggests that all four wheels are being driven and that power from the engine goes to all wheels.

As you’d expect from a supercar of such magnitude, it’s mind-blowingly fast. The engine and all-wheel drive system are the same as in the hard-top Huracan in this fabric-roofed one. A 5.2-liter engine developing 610 hp and 400 lb-ft of torque which is a very impressive result for one naturally aspirated engine.

Performance is still nearly on par with the hardtop version, with 3.4 seconds to get from 0-60 and 200 miles per hour top speed, just one mile per hour behind the fixed-top alternative. We suspect these numbers are actually closer to the coupe however but even with this difference it is something we can accept. If there’s one thing that’s usually a bad thing with convertibles, it’s the added weight. The Huracan can’t escape this either. It weighs in at 3,650 pounds, some 200 more than the coupe. This is the reason it’s a bit slower than the coupe but all in all, still a more than capable vehicle.

As mentioned, the roof is fabric and not a hard-top. The transformation from coupe to convertible is actually quite extensive. The fabric roof has three layers, providing more than enough insulation from the outside elements. There is, however, one noise it can’t contain, and that’s the glorious sound of V10 just inches behind the passengers’ heads. This, you’ll agree, is no bad thing, especially as the 5.2 liter V10 is one of the best sounding engines ever made.

The roof takes 17 seconds to lower and is fully automatic. Much emphasis has been put on the roof, especially in the way it looks. Even when it’s deployed, it follows the car’s angular lines perfectly retaining the same aggressive look without sacrificing anything or looking out of place. One of the most important things that Italian supercar maker wanted to keep on par with coupe was the aerodynamics and they impress with this setup. The roof’s party piece are the flaps which can extend to smoothen the airflow around the side of the car, as well as keeping the B-pillar shape that you’d have in the coupe. Take the top down and the flaps go lower as well, so as not to catch any air, preventing drag. The whole thing is so ingeniously packaged that the top speed of the car remains the same, regardless if the roof is up or down.

The convertible for most people is a more enjoyable car when compared to the coupe. The benefits outweigh the 200 pounds more it has on the coupe, which apart from racing drivers, no one can even notice on the racetrack or the road. But what everyone can notice and appreciate is the sound of the screaming V10 behind them.

Take the car out of crazy go-fast Corsa mode, and it becomes totally civilized. Lamborghinis of old have always been crude on the road machines, that were really only suited when going at least eight-tenths of the car’s full performance. Not so with the Huracan. It’s a pleasant drive even when just cruising, absorbing every bump and imperfection beautifully. You certainly wouldn’t want to daily drive it, but for what it is, it does it amazingly well. 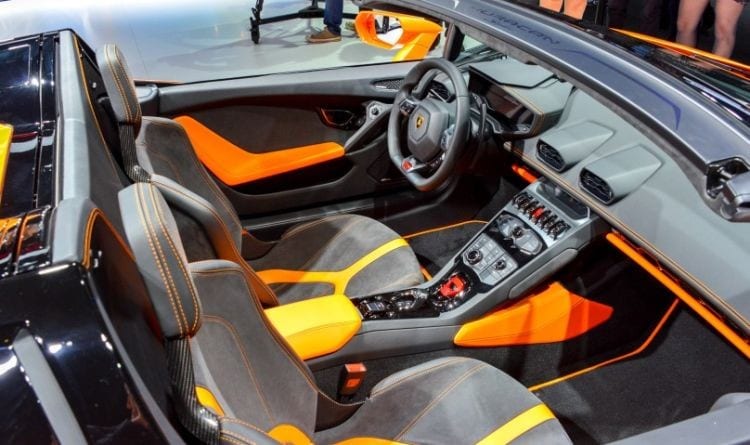 This is in no doubt helped by the superb cabin that just invites you in. It’s a far cry from the uncomfortable and cramp driving position of Lamborghinis of the past. The dash is designed to match the outside of the car with lots of angular features and the hexagon theme following through inside. The Audi derived infotainment system is incorporated nicely into the car, and there’s everything you’d expect from it. Sat nav, radio, climate control and so on. And the coolest thing? A jet-fighter style start button like the one found on the Aventador.

The seats are comfortable and supportive, but not harsh. I’m sure they would be too much for a very long distance drive, but really, who goes cross-continent driving in a Lamborghini. They’re made for short blasts, and that’s this car’s party piece.

Exterior is very aggressive just what we are used to from Lamborghini models. Mean looking LED headlights in combination with large air intakes for brake cooling at the front will be immediately noticed on the road. From the side, we can see sharp creases and large air intakes at the back that will supply the engine with air. At the back we have pretty small LED taillights and quad exhaust, two ends on each side, that clearly state that this is one monster.

All in all, the new 2016 Lamborghini Huracan LP 610-4 is a car that could quite easily be driven through any environment and weather condition. The four-wheel drive system means there’s endless grip on offer, and the V10 engine makes sure there’s plenty of fun and laughs to follow. Fuel consumption should be improved too, with the help of the cylinder-deactivation system which can shut off 5 of the 10 cylinders to save some gasoline but we know that this is not the most important feature to potential buyers.

Whether it’s used for canyon carving, highway blasts or just a simple town drive, the Huracan copes with everything beautifully. It’s a little bit expensive at $267,500 but that won’t put off anyone with deep pocket who already has his eyes set on this gorgeous car.