The 2016 Infiniti Q50 receives a major refresh this year. For starters there are three new engine choices: a turbocharged four-cylinder and two V6’s also sporting turbochargers. Other than that we find a revised steering system, some tuning in the suspension setup and improvements to the excellent Direct Adaptive Steering System.

The biggest problem for the Q50 and any Infiniti, as a matter of fact, has always been sales. Not because the cars themselves are bad or because the manufacturer is, but because they don’t have the popularity of their rivals. The fact that the Infiniti’s pocket cant’s stretch as far as BMW or Audi’s, for instance, means that they are often overlooked.

By doing so, however, you might miss out on one of the best vehicles to come out from Infiniti in recent times. Yes, that’s right: the Q50 is now one of the best cars in its segment. It was always easy to recommend it, but with the host of changes they made for 2016, they’ve made it that much better and even more competitive. 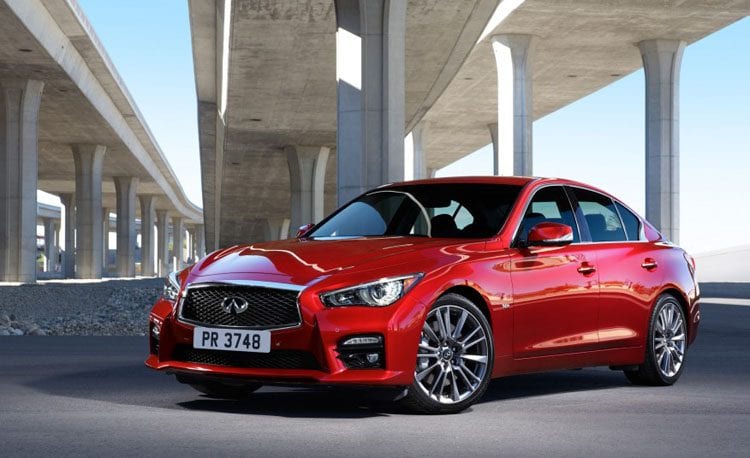 You know the saying: if it sounds too good to be true… This time, it’s not that case, it is that case. It’s not just hype. The Q50 really is fast, comfortable and luxurious all in one. How Infiniti manage to make it so is beyond us.

As we said, the Q50 is a midsize luxury sports sedan for five passengers. It can be obtained in six trims: 2.0T, 2.0T Premium, 3.0T Premium, Sport, Red Sport 400 and the Hybrid Premium. Each trim can also be had with an all-wheel drive system if the customer wishes to opt for it.

Furthermore, we have shift paddles on the steering wheel, rear air vents, twin touchscreen displays, voice controls, a rearview camera, Bluetooth connectivity, USB ports/Auxiliary jack and of course an excellent six-speaker audio system. More than impressive features list for the base version, and we like it. 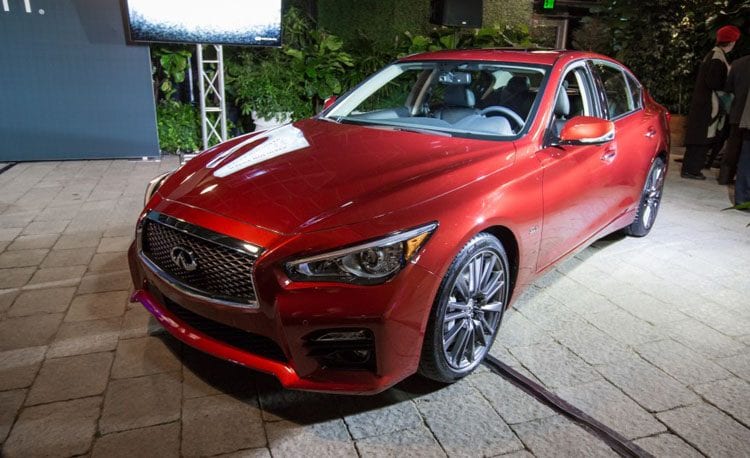 The 2.0T Premium and 3.0T Premium share the same gadgets and toys with the obvious difference being the engine, hence the name. The 3.0 gets a larger V6 compared to the 2.0 which, as the name says, has a smaller turbocharged four-cylinder. Both get sunroofs, auto-dimming rearview mirrors, and premium Bose surround-sound systems. The leather upholstery is optional, however.

The Q50 Sports gives you everything from the 3.0T plus 19-inch wheels, adjustable dampers, a different front fascia that’s unique, bigger brakes, sports seats for the front with more support and leather upholstery as standard.

Step up to the flagship Red Sport 400 and you get an even more powerful engine (like you couldn’t tell from the name), brushed exhaust tips and slightly better and more aggressive summer tires. Not a lot over the 3.0 as you know, but if you want ultimate performance, it’s the only model for you.

A Premium Plus package can be specified on all trims, and it adds auto-dimming mirrors, power lumbar and heated seats in the front, power-adjustable steering wheel, navigation system, a 60/40 split, and driver memory settings. A Driver Assistance package adds automatic wipers, blind spot monitoring, parking sensors for both the front and rear and of course, a collision warning intervention system. 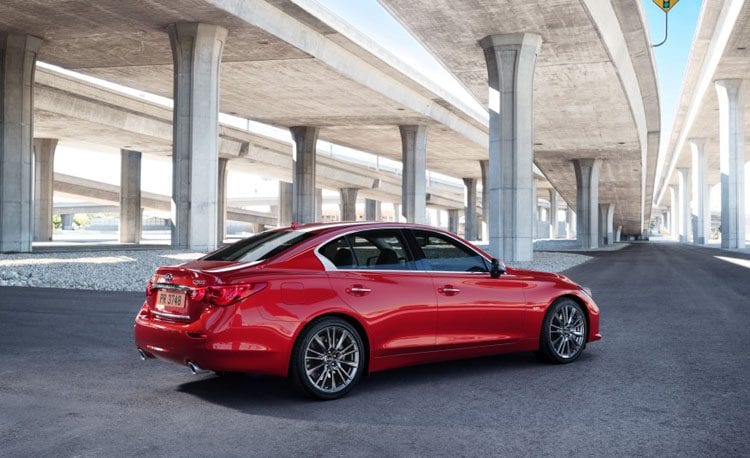 Like we said, you can have the Q50 with three engines. All of them are mated to a seven-speed automatic and power is sent to the rear wheels in standard guise. You can, however, go for an all-wheel drive system if you wish to do so.

The same engine is used in the Red Sport 400 but it’s been modified to produce, you guessed it, 400 horsepower and 350 pound-feet of torque. 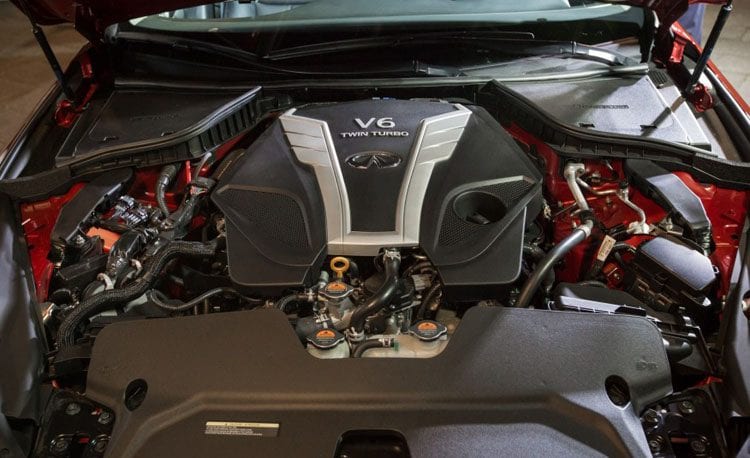 The smallest four-cylinder returns 26 miles per gallon (23/31 mpg for the city and the highway respectively) while the much larger and heavier 3.0T gets just 22 mpg on the combined run. The all-wheel drive variants of both engines return slightly lower numbers but not by much, 1 to 2 mpg drop.

A Q50 Hybrid is also in the mix. It receives power from a 3.5-liter V6 that is paired with an electric motor. That, in turn, is supplied by a rather large lithium-ion battery pack. Add the power of the electric and the combustion engine together and you have 360 horsepower.

The Hybrid did manage to reach 60 mph in just 5.3 seconds, making it one exceptionally quick car. It also returns 30 mpg on the combined run with a whopping 32 mpg on the highway and 28 for the city. The all-wheel drive obviously takes its tool so expect that to offer lower results by a few mpg.

The Q50 is also exceptionally good in the corners. It keeps its composure and exhibits a minimal amount of body roll. It’s like a baby child of a Nissan and a Lexus. It’s incredibly comfortable and relaxed when you want it to be, say on the highway, and it just transforms into a real beast of a car if you throw it on some twisty roads.

We can’t praise it enough. It would be a real shame to ignore it altogether and not even give it a chance because it deserves it. Sure the Germans are nice but even on a side by side comparison, we can honestly say we’d have the Q50 over some of them.

You should ideally test drive all of these and make an assumption based on those results. Prices for the Q50 start at $33,950 making it a steal when compared to its rivals. It’s great bang for your buck, just make sure not to go too crazy on the options or trim levels.