Large full-sized sedans aren’t what they used to be. They were always popular but not for the right reasons. Quite often you would only buy a large sedan because you needed the space and practicality, and not for its exterior appearance or sporty driving characteristics. In the recent ten or twenty years, that changed drastically. With the models of the first-gen 3-Series and the early Italian vehicles, we received cars that proved that they can be fun to drive yet practical. Well, the likes of the Hyundai Azera are still showing that today, with an even greater push of what’s possible, balancing that fine line between looks and practicality expertly.

The Hyundai Azera is one of the rare vehicles we actually find to be great at all things. Granted, it does have a few issues but which car doesn’t really? More on that later but for now, all you need to know is the following: The 2016 Hyundai Azera is mostly a carryover from the previous year, resulting in only minor tweaks which are barely noticeable. Including things like standard adaptive cruise control and stop-start on the Limited model, as well as an electronic parking brake with a hold function that’s automatic. Not the big news we know, but with such a modern vehicle why to update it at all for the time being.

Let’s get the looks out of the way first. This is a stunning car. It’s amazingly jaw-dropping. We think it’s one of the most attractive vehicles in its segment. Just look at it. A long, accentuate roofline, traditional to that of the large sedan but here it features a swooping back end, descending all the way to that cut-off looking rear fascia. The front is the most elegant side of the car. The long, elongated headlights only add to the entire visual concept and the upward slanted grill further accentuates the appearance. If looks are anything to go by, this one’s a real winner.

When buying the Azera, you get a choice of two trim levels. The base model and the Limited version are available. As standard the Azera comes with 18-inch alloy rollers, fog lights, keyless ignition and entry, leather upholstery, automatic headlights, heated mirrors, a driver’s seat which is 12-way adjustable, a codriver’s seat which is “just” 8-way adjustable, a cooled glovebox, dual-zone climate control (automatic of course) and hands-free opening trunk, also automatic. If you thought your BMW came loaded as standard, take a look at the 2016 Hyundai Azera and impressive list of features.

The technology side of things is covered by the Bluetooth and audio connectivity, an 8-inch touchscreen display featuring the navigation and smartphone applications such as Pandora or Siri Eyes, a standard rearview camera, the Blue Link emergency system by Hyundai and a staggering audio system with 14-speakers.
Should you go for the Limited, expect larger 19-inch alloys, xenon headlights, LED fog lights, adaptive cruise control, a panoramic sunroof and the usual array of Driver assistance safety features such as lane-departure system and similar. 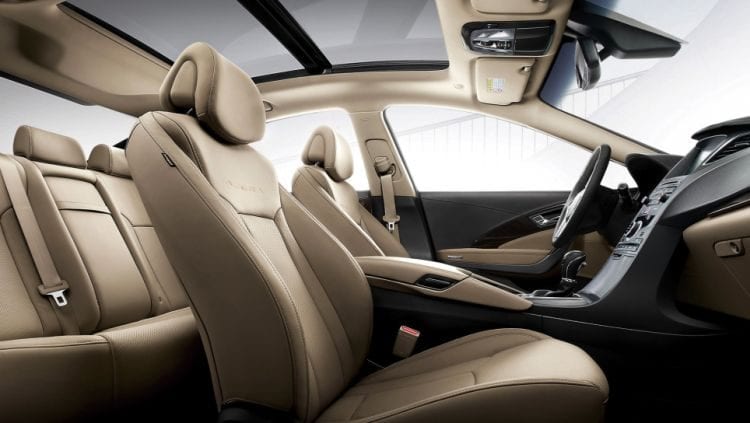 The interior’s luxurious feel is not surprising at all. We expected this level of luxury and the 2016 Hyundai Azera simply delivered. The only drawback we could find was a few plastic bits which felt somewhat cheap and not up to par with the rest of the cabin. But when you have such high-quality materials for the majority of the cabin which are soft and smooth, the lower-end stuff does tend to show the contrast. Not a bad thing but it points in the direction where the cost savings are and how the engineers managed to do it.

We have no issues with the cabin’s design, however. The center stack is charming in its own minimalistic way, and the dashboard design is as elegant as you can get basically. The center stack is the same one like before, meaning you get last year’s updated buttons and knobs. The big 8-inch display is easy to use, and it’s intuitive, not to mention responsive. No matter what you do, you can’t get it confused, which proved to be an issue with some of the competition’s slower systems. As an extra mile, Hyundai has installed buttons for virtually everything (even the radio), making the screen only needed for viewing and not that much interacting.

The hood is home to Hyundai’s 3.3-liter V6 unit developing 293 hp and 255 lb-ft of torque. It’s mated to a six-speed automatic transmission as the only option, implying there’s no manual for you enthusiasts out there. Not that you want to be shifting gears yourself with a car such as this, however. The entire experience is meant to isolate you from everything and give you total comfort with minimal effort, something the Azera is extremely good at.
In testing the Azera managed to do the 0 to 60 miles per hour sprint in 6.8 seconds, making it just about average, tilting towards better than average. It’s nothing special for the V6 sedan market, but a good time overall. It managed to return 20 miles per gallon in the city and 29 on the highway. This resulted in 23 mpg for the combined run. The Luxury model which has more features that also draw more power and is heavier achieved 19 mpg in the city, 28 on the highway and 22 miles per gallon on the combined run. Again, it’s around average. Not bad, but not the best either.

Take the 2016 Hyundai Azera for a drive and you might be in for a shock. No, not a bad one. This model handles surprisingly good. The beast of an engine develops nearly 300 horsepower and makes the Azera really shift. There’s more than enough power to be easily able to overtake just about anything on the road and the automatic gearbox is smooth yet fast keeping you always at optimal rev range. It’s not DCT levels fast but for what it is, it’s great, and we are sure that most drivers will be quite happy with it. 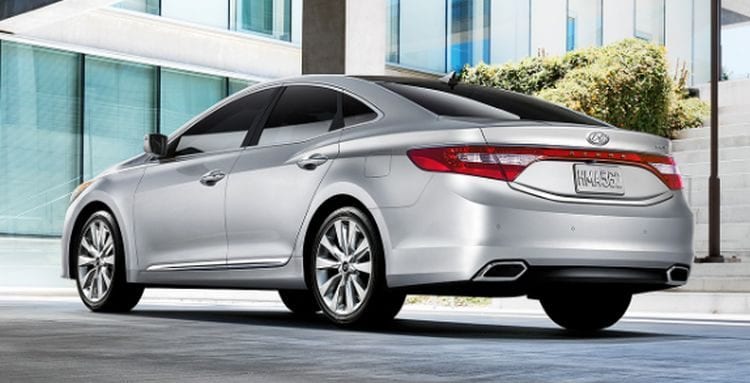 The ride is good, and the damping is just right. It absorbs most bumps with ease while providing enough feedback and grip even in tight corners. The only downside is the lack of alternatives for the engine or the suspension for instance. The competitors offer multiple engine choices as well as adaptive suspension. If you’re not worried by that at all, prices start at $34,100 making it effectively one of the best if not the best bang for your buck deals.