2016 Honda CR-V – So it’s a new CR-V. You may not think so because it looks almost exactly the same but it has had some minor upgrades. There’s a brand new trim option called SE which is fitted with 17-inch alloy wheels while the existing LX model has been upgraded with a security system and the much wanted rear privacy glass. Among the main questions, we can hear you asking yourself are: If it’s it still worth buying, considering not a lot has been upgraded?

Truth be told, yes it really is. If something’s not broken, why bother fixing it right? The Honda CR-V has always been a class leader in its segment so there was really no need for a major upgrade, although it would have been welcomed for sure. That being said, however, the CR-V remains a great choice for anyone looking at vehicles in this segment.

Starting off with the engine, there’s only one option and it is Honda’s excellent 2.4-liter four-cylinder naturally aspirated unit developing 185 horsepower and 181 pound-feet of torque. This engine is mated to a completely new CVT transmission that has been introduced with 2015 model and has replaced older five-speed auto providing about 33 percent wider gear ratio. 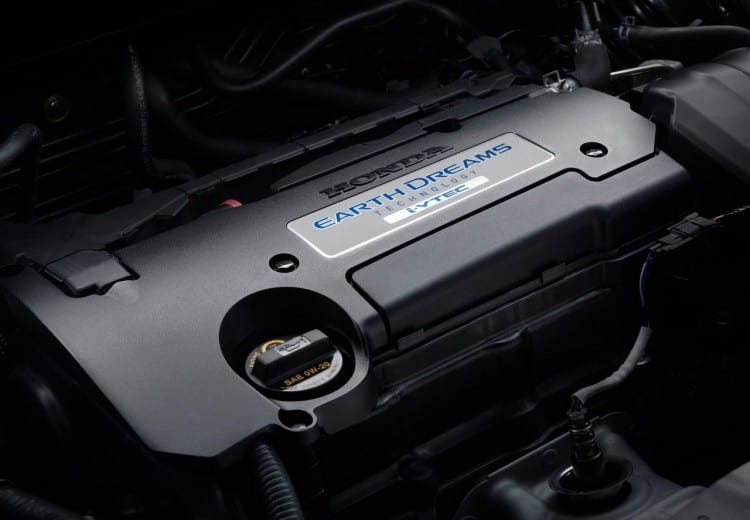 There’s no manual option sadly but there is a four-wheel drive option making it interesting for those drivers that live in countries with many snowy days. The 2016 CR-V comes in front-wheel drive guise as standard but a four-wheel drive system can be added also. In most cases it isn’t worth it, but if you’re going to be doing light off-roading or in colder parts, it might make sense.

The front-wheel-drive version gets 29 mpg on the combined run which is amongst the best in class. Its four-wheel drive brother, however, is behind a bit at 27 mpg which still is an excellent result considering its capabilities and the added weight. The 0-60 time for the four-wheel drive 2016 Honda CR-V is 8.8 making this car more than adequately in terms of acceleration.

Don’t expect hot-hatchback levels of performance and handling, however. The available power on tap is delivered way up in the rev range, as is the case with most Honda engines. If you don’t really rev it out you won’t get much speed out of this unit. Because it’s lacking torque compared to some of the turbocharged competitors, highway and high speed overtaking requires planning and work of the CVT that will send the engine to slightly higher revs. It is okay and more than enough for what it is, but the competition, namely from Hyundai and Ford have Honda topped in the engine department.

The interior is the place where you’ll be all of your time, so you’ll be pleased to hear that only a few cars in this segment have an interior as practical as the CR-V’s. The front seats are great and offer good support, especially since they’re power adjustable, but the rear ones are even better. There’s lots of rear legroom for taller passengers and even LATCH points for fitting in a child seat in a breeze.

Although the practicality of the CR-V is unrivaled, the materials used in the interior really aren’t. It’s a combination of cheap plastics all over the place and lots of rough surfaces that are really unpleasant to the touch. Of course, it’s still bearable, but the competitors have the CR-V trumped in this area we’re afraid. 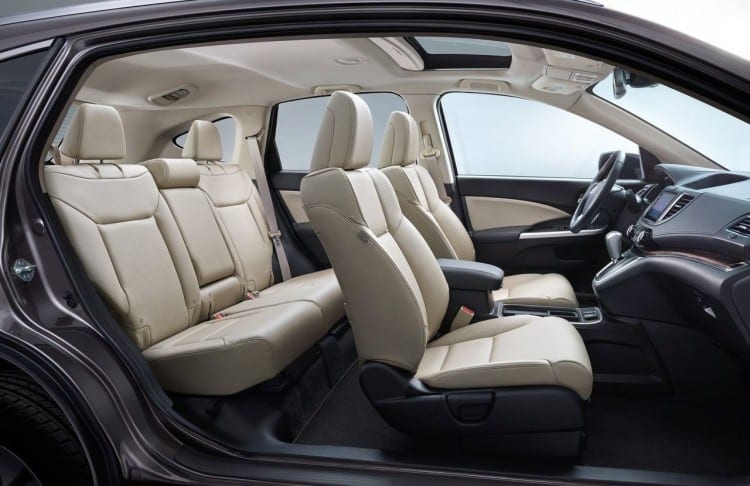 The CR-V manages to redeem itself in terms of infotainment and safety systems at least. There’s an excellent rearview camera, Bluetooth for your phone and even a message reader which utilizes Pandora and is Pandora compatible. This is all standard even on the LX model. Most of the competitors don’t offer them at all, not even on their most expensive models. This is definitely a big selling point for the CR-V that obviously wants to become one of the leaders in tech offer for a segment.

Boot space and practicality is another segment where this vehicle jumps above most competitors. Lift the boot and you’ll find the most usable boot in the entire compact sports utility segment. It’s capable of loading 37.2 cubic feet of stuff, which is a big deal in this sector. No doubt the boxy shape of the car and the fact that there’s a relatively low and flat floor help it. Although this is more than enough for daily errands, putting the seats down gives you a staggering 70.9 cubic feet and chance to cope with the pretty large amount of cargo. Dogs, as well as large bulky items, are no problem for the CR-V, it just eats them up.

On the safety front, there’s the usual array of systems we’ve come to expect as standard on most cars and these include antilock brakes, traction control, stability control, front seat airbags and an excellent rearview camera. It might not be a leader here but still it does a good job at keeping you and your family safe.

Potential owners should be happy with the LaneWatch monitoring system which constantly scans the road and surrounding cars to make sure no cars are in your blind spot. It’s standard on nearly all trims except the LX and SE. A lane departure warning comes as standard on the Touring model as well as a forward collision system which can apply the brakes to reduce the crash if it senses an imminent impact.

The CR-V’s excellent CVT is now the only option available since there’s no manual or older automatic option. While this may deter some potential customers be assured that there is no better gearbox for this car. Yes, the CVT has been heavily criticized when used with high-performance vehicles, but on the CR-V it’s brilliant, we have already mentioned that this is an upgraded and all-new version.

The CVT in this vehicle seems to be different than that fitted to most. The main reason why CVT has a bad reputation is due to the constant engine noise which almost never changes. Instead of you picking a gear and the revs going up and down, a CVT gearbox decides on a rev range and uses effective gear ratios to seamlessly change the gears. In theory, it’s brilliant, acting as a single-speed gearbox, but in practice, it has proven to be less effective. Not so with the CR-V however. The one fitted to the test model worked perfectly. 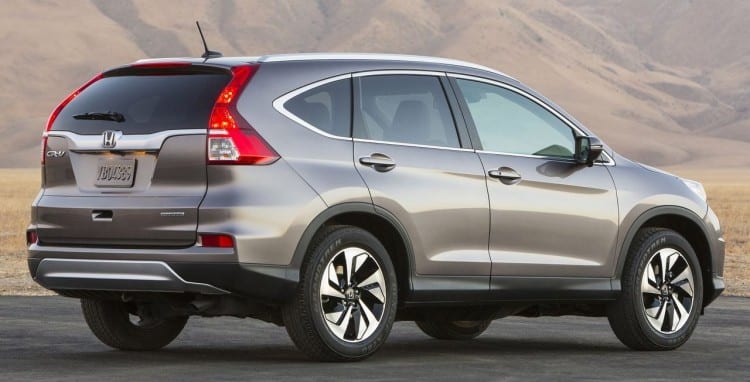 The overall feel of the car is of one that will last for years and years. It genuinely feels like it could do over a million miles with good maintenance. It’s not particularly exciting to drive, nor does it have the best in class fuel efficiency. But it does a little bit of everything, and it does them in a way that no other can. If you’re looking for speed the competition in the segment may be more suited, but then again speed isn’t what’s important with cars like these. The 2016 CR-V is an evolution and not a revolution. A practical, safe and comfortable car that’s excellent as a family car. It’s also the quietest in its class.

What do you think about 2017 Honda CR-V Rumors