If there is such a car that is instantly recognizable on a global level, it would have to be the Mustang. You don’t have to be a car guy to have heard of it. You don’t even have to like cars at all. It’s such an iconic name and car that it’s probably the best-known car of all time. The legacy and heritage of the Mustang started in 1964 when it was first produced.
The interesting thing about Mustangs is that they always come in special editions, be it performance enhancements or just visual upgrades. The true high-performance versions never fail to amaze. They’re often called “Cobra” due to their paint scheme associated with the Shelby Cobra and their badge, featuring the trademark Cobra icon.

One of the most well-known Mustangs, even to this very day, is the Shelby GT350. In fact, it’s still manufactured today. Back in the older days, it single–handedly shaped the entire pony car market and defined what a track-ready muscle car should be and look like. Among the various GT350s, there was one special edition which really stood out.
The first car to wear a GT350-H badge was a black and golden colored Mustang, known as the Hertz “Rent a Racer” car. It was a limited production, but Ford did build quite a few of them. The black paint and golden accessories, along with the high-performance of the GT350 made this special edition one of the most sought after. Here we are, five generations later, seeing the same paint scheme and name on the sixth-gen Mustang.

The reason for this special edition is quite simple. 50 years have passed since the first one was built for Hertz, therefore marking a 50 year anniversary. As a gift of sorts to Hertz, although to themselves too, Ford introduced the new Ford Shelby Hertz GT-H in March, at the Classic Car Club meeting held in New York. Of course, Ford and Shelby wouldn’t let this car pass with just a paint scheme, so they’ve added some extra parts.

The looks of the car are nothing short of amazing. It isn’t as aggressive or angry as the normal GT350, but it does have some distinctive features, making it unique looking compared to the standard GT. The first thing you see is, obviously, the black exterior paint matched with the gold racing stripes spanning the length of the car. This, as you can imagine, is a tribute and reminiscent of the first Hertz edition done on the first-gen Mustang. 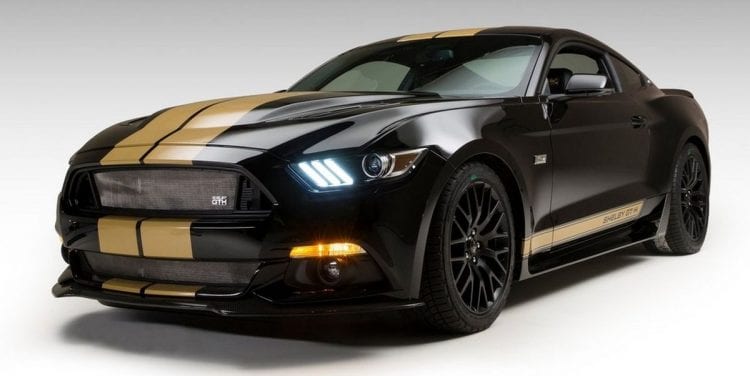 The gold accessories go beyond just two racing stripes along the car. The side rocker panels also feature two gold stripes, one on each side, with the “Shelby GT-H” lettering. There are also a few emblems and logos scattered throughout the body of the car, just to remind you this isn’t an ordinary Mustang GT. The “Hertz Edition” emblems are located on the front fenders while the “GT-H” ones can be found on the trunk lid, rear gas cap, and front grille. Making it even more unique are the carbon fiber front splitter and rear spoiler, as opposed to the standard elements found on the GT model. The hood is different as well, with special air vents and a large bulge right in the middle. To finish off the look, we are getting 19-inch aluminum wheels uniquely designed and which are wrapped in very sticky Michelin’s that are needed to keep all that power under control. 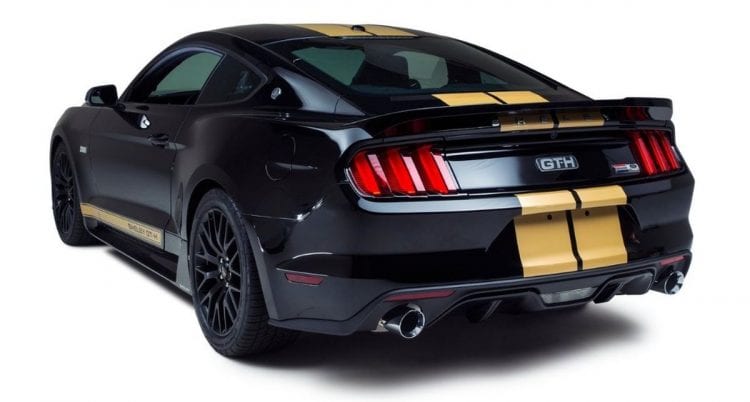 AS you might have suspected, the interior is largely a carryover from the Mustang GT, the car the GT-H is based on. Ford hasn’t forgotten to add a few features even in the cabin, just to make sure you still know it’s a special edition of their Mustang. This is immediately noticed when you enter the car.

The seats, for instance, have the mandatory “GT-H” logos on the top headrests, and there are “Hertz Shelby GT-H” customized sill plates on the car. The dashboard even has a numbered plaque, indicative of the model and specific serial number. It may not sound like a lot, but you do have to remember that the aim here isn’t to introduce a whole new model, but rather a special version of an already great vehicle. Clearly Ford managed to do this with the addition of few badges making it unique.

As for the rest of the cabin, it’s standard GT. The materials are excellent; we even valued them as among the best in class for the GT. The fit and finish of the cabin are just superb; it’s nothing like Mustangs of previous generations. It’s been built to last, and you can tell. Nothing in here will fall off or squeak even after miles and miles of abuse. The seats themselves are very comfortable but supportive at the same time, with lots of side bolstering. Headroom and legroom are great even for taller people. As far as interiors go, the Mustang’s is a great one. 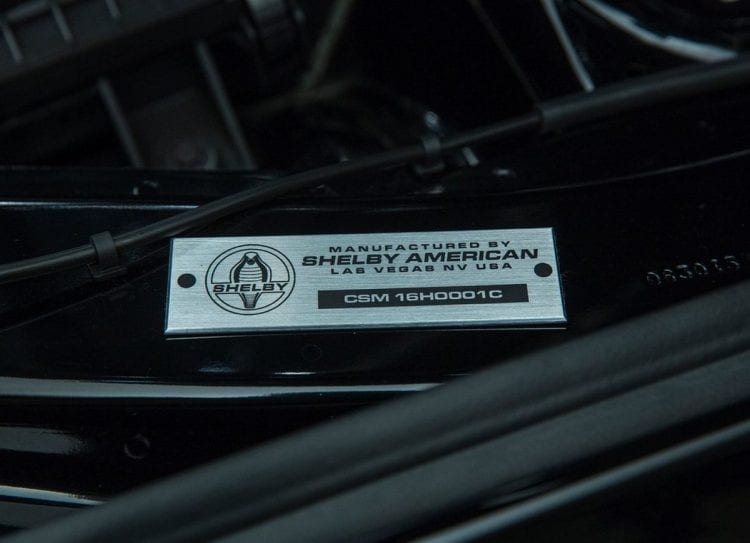 Under the hood of 2016 Ford Mustang Shelby GT-H, you’ll find the same 5.0-liter Coyote V8 like the one in the standard version. Shelby hasn’t announced exact power figures, but we assume that the naturally aspirated V8 will still produce 435 hp and 400 lb-ft of torque. The 2006 Hertz edition had a 25 hp and 10 lb-ft upgrade over the standard car, but we can live with 435 hp in this one. 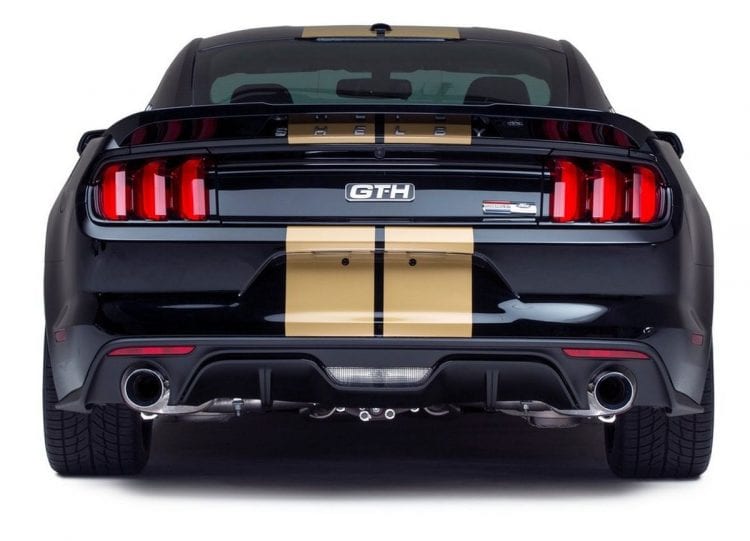 Because it’ll probably have the same output and it weighs the same, performance should remain brilliant. The sprint from 0 to 60 miles per hour will be completed in 4.5 seconds, and it will run 13-second quarter miles. A welcomed upgrade over the standard car is a cat-back exhaust system fitted by Ford Performance department themselves. It may not unlock a lot of hp, but it does make the noise throatier and angrier than before.

The big news is the suspension setup itself. There’s a Ford Racing Handling Pack, which brings specially tuned dampers, revised sway bars and even lowered springs for a much better stance. Not only does it look meaner with the help of these upgrades, but it should also drive better and deliver a more race-car feel for the driver. Sadly the 2017 Mustang GT-H won’t be sold to the general public, i.e. it’s only built for Hertz. It will be made in limited number, and only 140 units will be produced. It’s a real shame it won’t sell on the market, but you will be able to rent it from your Hertz dealer, so that’s a plus. 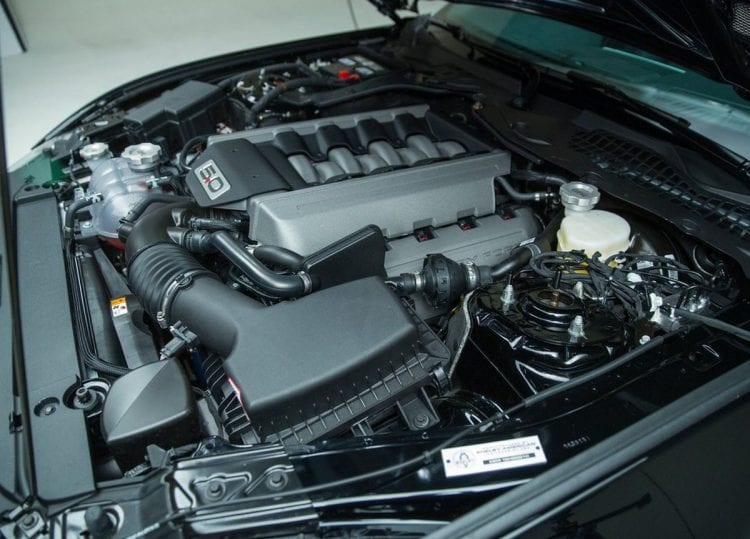