The Ford Fusion received a complete redesign just three years ago. It was a much-needed change and one that blasted the Fusion from the back of the segment all the way to the top. It immediately reclaimed its title as one of the best midsize sedans on the market. It was no longer boring and the uninspiring vehicle like before. The new fresh design and features immediately resonated with the people and as a result popularity and sales shot up right away. The fact that Ford only kept updating it little by little each year from there on out only speaks volumes about how big of a redesign it was. For 2016 the Ford Fusion remains practically the same except for the debut of the brand new sporty “Appearance Package” option on the S trim. In all honesty, however, it doesn’t need anything else or a lot in particular. It’s still one of our favorites for this segment. Read on to find out why.

The outside is still one of the Fusion’s strong sides. It doesn’t just look great for a sedan, but it looks great full stop. It’s got really aggressive but elegant lines with incredible details. The best way to describe it would be to call it an Aston Martin look-alike, and we mean that in the best way possible to both the Ford and the Aston. This thing has incredible looks, with the front fascia being undoubtedly the best side of it. Let’s put it this way: if this thing shows up in your rearview mirror, you’re almost guaranteed to move out of the way just due to the sheer presence it has.

The cabin design and the fit and finish of the interior mirror that of the exterior. The overall look and feel of the cabin are urban and very modern, with lots of accents to create a free and open space. The lack of any center-stack buttons due to the MyFord Touch system frees up the cabin that much more. They went with a simple yet elegant design and removed all of the stuff that proved to be just unnecessary and were cluttering up the rest of the space. The result is an interior which is on an entirely new level compared to the old generation Fusion. It really feels like it took a giant leap forward, in more ways than one. The design, ergonomics, and quality have all been improved to the point that it’s now in a class of its own. You’ll struggle to find an interior as nice as the Fusions. 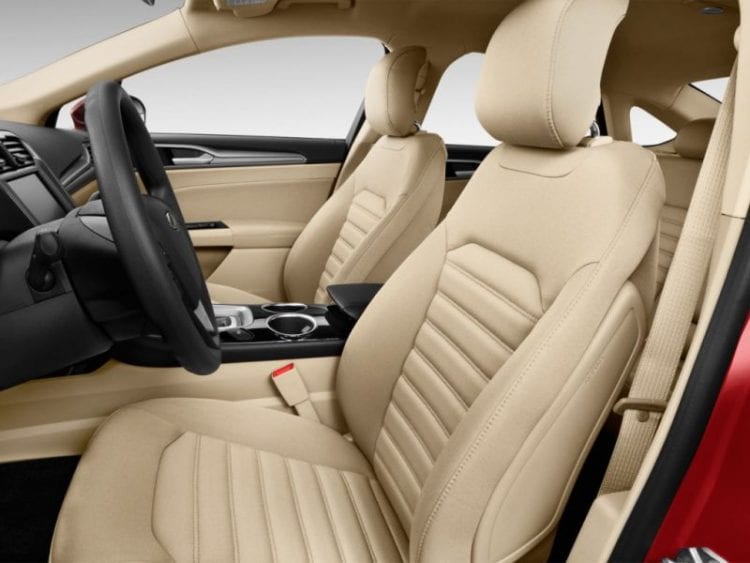 The seats are comfortable and supportive, an ideal mix for long journeys and sportier, spirited driving. The driver’s seat is easy to adjust, and it provides good vision out of the front and side windows. The rear window is difficult to see out of because of the roof that slopes (you have to sacrifice something, and Ford has sacrificed a bit of visibility for style, something we approve of). They solved the issue by fitting a rearview camera as standard, so it’s basically not even worth mentioning because the system works great. If anything, the sloping roof is more bothersome for taller passengers due to more restrictive headroom than it is to the driver because of the lack of visibility. It’s still not that bad, however. Unless you’re really tall, you’ll find the rear to be more than comfortable. The trunk space stands in at 16 cubic feet, making it around average for the segment.

Just like with all recent Fords, we decided it’s worth talking about the MyFord Touch interface. It’s such a giant leap to the old system that no matter what model they put it in, we’re going to have to mention it at least. Honestly, it’s the best thing to happen to any modern Ford. We suggest you check the box for it (it’s an optional extra) because not only is the large 8-inch display great, but without it, the rest of the controls become cumbersome and less user-friendly.

Under the hood, we have the usual array of Ford engines. The Fusion S and SE both come with the 2.5-liter four cylinder developing 175 hp and 175 lb-ft of torque. Power is naturally sent to the front wheels via a six-speed auto. The SE gets an additional two engines (optional). A smaller 1.5-liter EcoBoost I4 is available, but it does have a turbocharger strapped onto it. It’s good for 181 horsepower and 185 pound-feet of torque. If you want the most powerful option, you’ll have to turn to the 2.0-liter turbocharged EcoBoost four-cylinder. It makes 240 horsepower, 270 pound-feet of torque and a decent soundtrack. Sadly it only comes with the six-speed auto. Sorry manual enthusiasts.

The Fusion Titanium is only available with the most powerful 2.0-liter unit. We should note that you can specify your Fusion with all-wheel drive but only if it’s also fitted with the 2.0 turbocharged power plant. That is top of the line Ford Fusion and it is capable of reaching 60 miles per hour from a standstill in 6.9 seconds, making it around average for its class. Expect the two remaining engines to be a second or two off that time, especially the non-turbo unit. For just commuting all are more than capable, but if your budget can stretch to the 2.0-liter, we strongly suggest going for it. It’s the most potent and arguably the best bang for the buck. 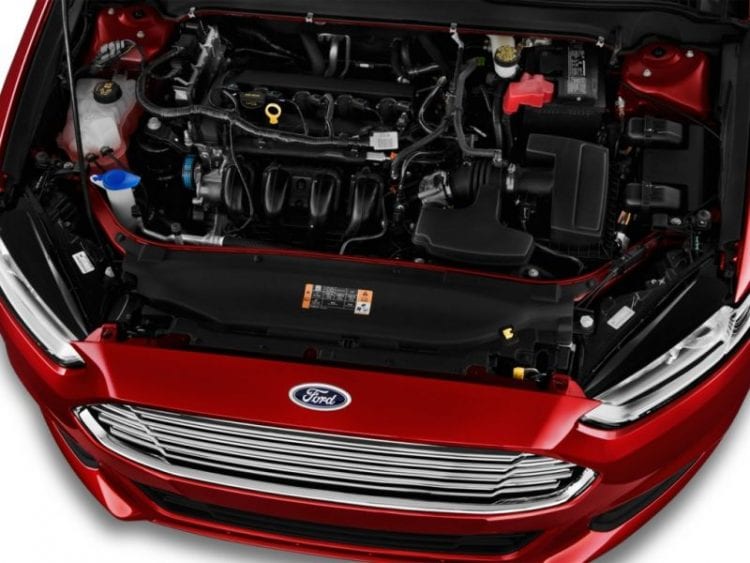 The base 2.5-liter engine returns 26 miles per gallon on the combined run. Decent, but nothing special. The smaller 1.5-liter four-cylinder is much better, managing to return 29 mpg on the combined cycle as well. If you don’t have the stop-start feature, it will offer 28 mpg, still not a bad result. The engine we like the most, the 2.0, will display 26/25 mpg for the FWD/AWD versions respectively.

The standard Fusion starts at just $22,000. For that, you get the base engine and the base level of equipment. If you can afford a 2.0-liter unit go for it. If the budget allows for an AWD system as well, even better. It’s arguably all that you’ll ever need from a car.