Home
Crossover
Ford
2016 Ford Flex – Beautiful Inside and Out

Here’s something we really like: the Ford Flex. Finally, for 2016 Ford Flex they’re getting rid of the problem that’s been plaguing all Fords, not just the Flex. It’s the problematic MyFord Touch system and after 2016 it seems that all Fords will get the much better Sync 3, including the Flex. A rearview camera is now standard across the entire range (all trims) but that’s about it for the Ford Flex and its 2016 upgrades. Still, it isn’t like it needed much.

Right from the get-go, the Ford Flex was a difficult one to swallow. Depending on your definition, it can either be an SUV, a wagon or even a minivan. Label it as you wish, the Ford Flex continues to give its owners a lot of space, comfort, and practicality.

The exterior is probably the best and most confusing feature of the vehicle at the same time. It’s brick shaped but not in a bad way. You can definitely tell it’s large. Actually, it’s not large, it’s massive. But the weird thing is that it isn’t that far off the ground like, say, an F150. Its massive rear overhang gives the impression of a wagon as well, making the Flex an oddball when it comes to categorizing it. It’s a scaled up version of a wagon trying to be an SUV. That’s the best description for its look that we were able to come up with. 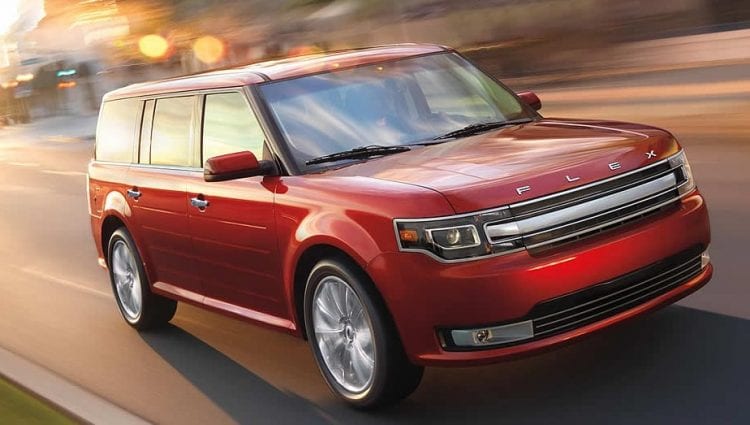 In all honesty, we really like the styling. It’s so odd and quirky that it’s likable. The shape itself is great and unique. Couple that with the great lines and nice headlights and you have a recipe for something different on the market. If you stand from afar you could be even fooled into thinking that it actually is a wagon and nothing more. Once you’re next to it or see someone next to it/inside it do you realize that it isn’t a standard wagon at all? 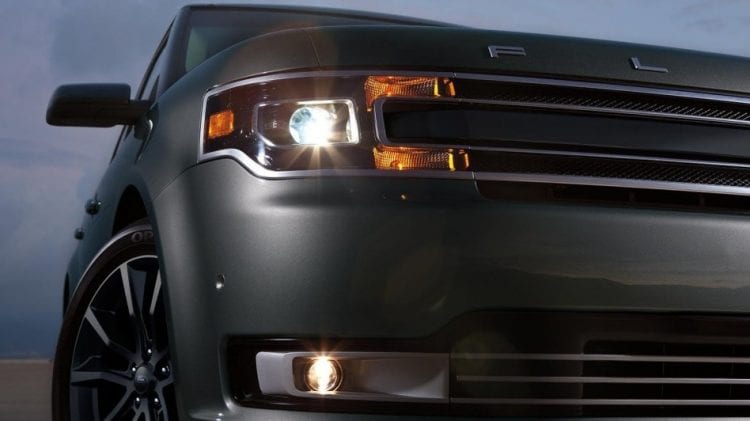 It’s very tall but its length hides that fact very well. What else can we say? It’s something different and fresh. It may have been introduced back in 2009 but we’ve yet to see a competitor as good looking as the Flex. When it comes to looks, it seems that the Flex has found its very own niche and is sticking to it. And for the moment, it’s the only one in it.

Competitors wise, you have the CX-9 as the closest thing to match/resemble the Flex. It too has been redesigned making the Flex an even tougher choice to go for if you ignore the exterior. Then there’s the Toyota Highlander, a great all-rounder that never seems to fall behind. 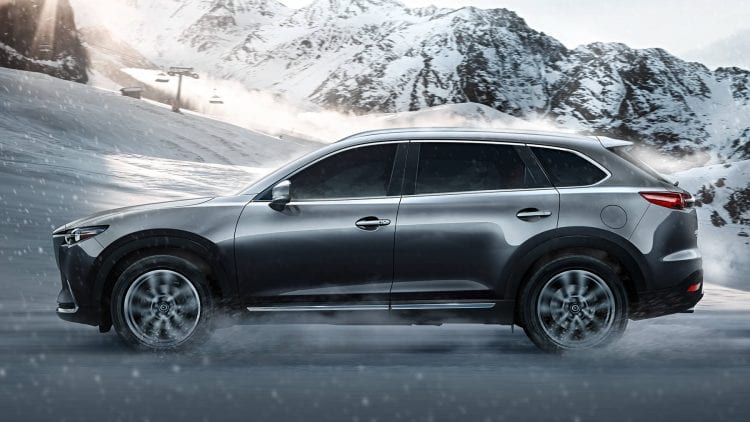 Oh and the best thing about the Toyota? You can get it as a hybrid. If you want something American you can have the GMC Acadia as it’s roughly in the same category but that hasn’t aged nearly as well as the Flex has. If looks haven’t been enough to make you go for the Flex, read on to find out more about it.

Due to the fact that it has a largely boxy shape, the Flex is able to offer an incredible amount of cabin space. There’s nothing protruding inside and the lack of any outside slopes makes the cabin have an even roomier feel as well. All three rows of seats are genuinely adult friendly. Now that’s a really rare achievement, especially in this segment. The auto-folding middle-row seats make getting in and out of the rear row a simple task. If you go for the captain’s chairs in the middle you will lose a seat but gain options to recline and slide them around. 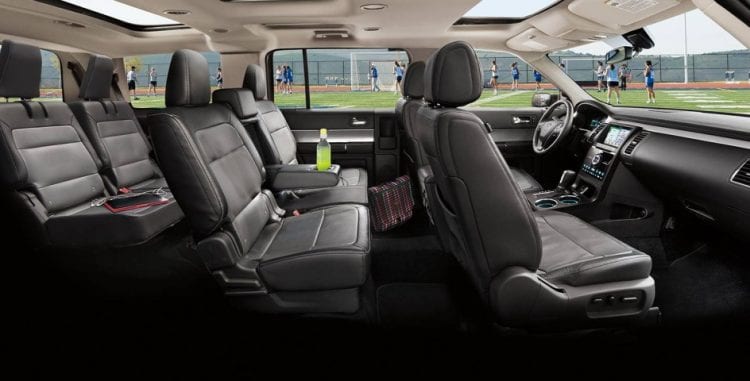 They also come with seat heaters in them, always a nice touch especially in the winter. There is a possibility to spec the Flex with a middle-row center console refrigerator but it can only hold a few cans at a time. The people on the front seats will enjoy high-quality materials on the dash and the center console. The materials used in the Flex’s cabin are still a large cut above anything in the segment, and they wouldn’t look too bad even in something as luxurious as a Lincoln. 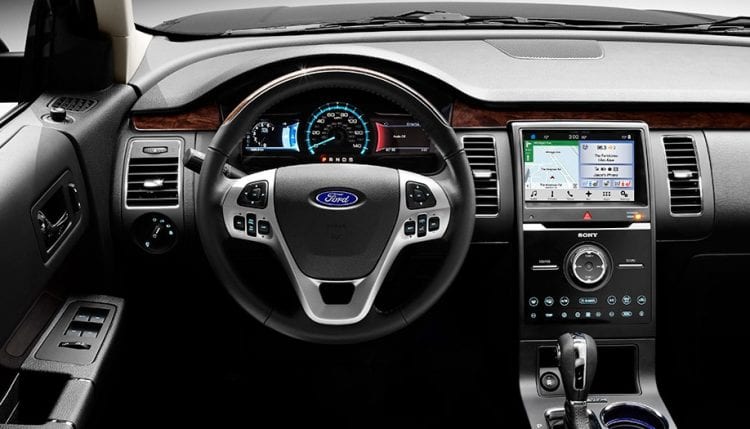 At the back, there is 20 cubic feet of space. Although that may seem small, trust us, it’s not. If you really need more space you can always fold the rearmost seats down and get 43.2 cubic feet. Folding down the second row as well gives you an even more impressive 83.2 cubic feet.

The standard Ford Flex has a 3.5 liter V6 developing 287 hp and 254 lb-ft of torque. Power is sent to the front wheels via a six-speed automatic transmission but you can get the Flex with an all-wheel drive system on the SEL and Limited trims. Fuel consumption for this engine is rated at 19 mpg on the combined run (16/23 for the city/highway) for the front-wheel drive version and 18 mpg combined (16/22 for city and highway respectively) for the one fitted with the all-wheel drive system. 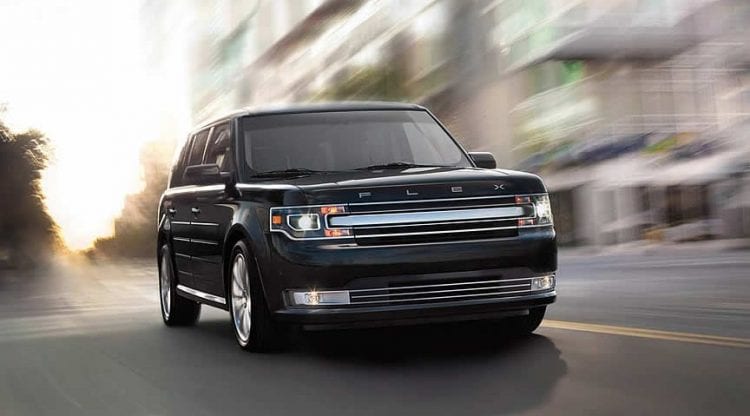 The top Limited trim has the option of an EcoBoost 3.5 liter V6 fitted with a turbocharger. In turbocharged guise, the EcoBoost unit develops a healthy 365 horsepower and 350 pound-feet of torque. As it’s a rather powerful unit you can only have it with the all-wheel drive system and shift paddles on the steering wheel. The EcoBoost Ford Flex is capable of reaching 60 miles per hour in just 6.2 seconds. 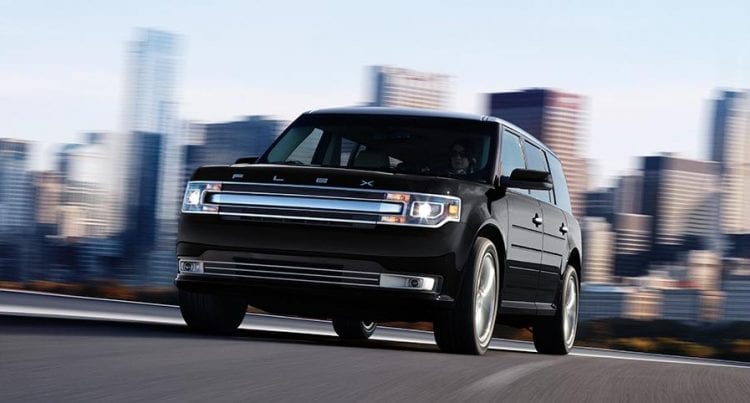 That’s an incredible feat when you consider how large this thing is and how much it weighs. It will use the same amount of fuel as its standard engined cousin, 18 mpg. If you equip and spec it properly the Flex is able to tow up to 4,500 pounds, irrelevant of engine choice. That’s a lot better than most of its competitors.