The Ford Edge has always been in an interesting category. The fact that it’s bigger than most crossovers means it can’t be really placed as one, but then again, it’s not as big as a Flex, meaning this car is quite literally on the edge. The edge of small crossovers and bigger SUVs, and it walks that line perfectly.
It has lots more interior space than your standard midsize crossover but still isn’t as wide or long as the full-sized SUV. Because there’s a relative lack of competition in its segment, it enjoys most of the glory and is really the most sensible choice if you’re after a bigger crossover, but don’t want to go for a large and bulky SUV. 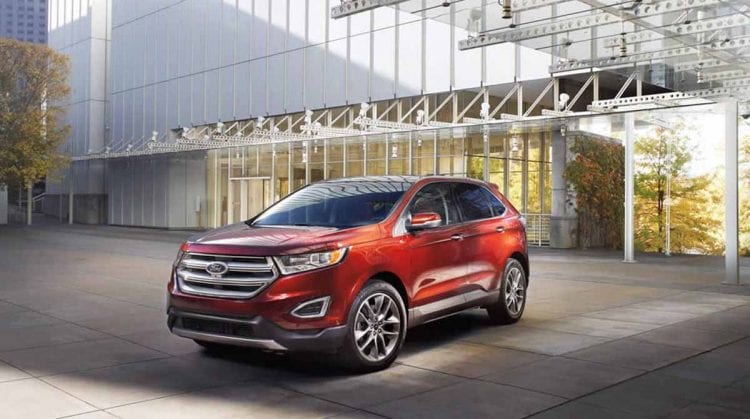 There have been significant changes for 2016, and nearly all of them are major. Ford really listened to the customers and acted accordingly. For starters, there’s an all-new infotainment system titled Sync 3 but it is optional. There’s also variable-ratio steering on the Titanium and the Sport trims, with the Sport getting a power-adjustable steering wheel as standard.

Engine wise, the V6 3.5-liter option has been dropped from the base SE model and it is now only available with the four-cylinder EcoBoost unit which is upgraded and now has a stop-start system. There’s all-wheel drive on the Sport trim which is a welcomed addition and should see an increase in popularity in that particular trim.

Speaking of engines, let’s start with engine options for the 2016 Ford Edge. There are three different engine options available, and all of them are mated to a six-speed auto as the only option. Sadly, there’s no manual yet and we suspect there might not ever be but that’s reasonable considering the car’s segment and intentions. 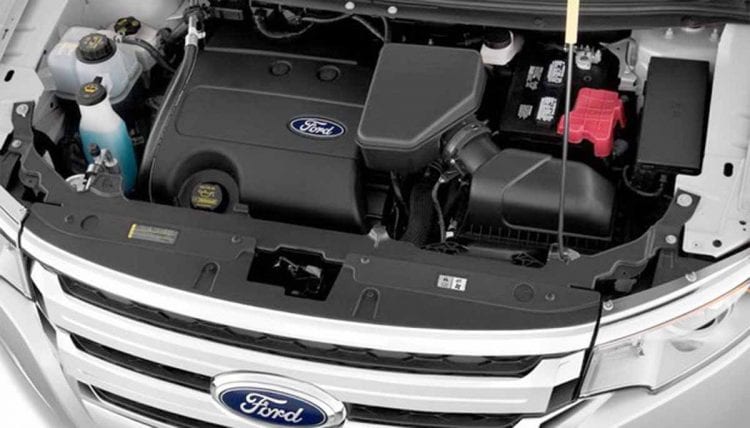 The standard engine on all trims except the Sport is a 2.0-liter four-cylinder from EcoBoost family and again comes with a turbocharger. It makes a respectable 245 hp and 275 lb-ft of torque making it a good choice for a vehicle of this size.

Just like most of the smaller crossovers and competitors, the Edge comes with a front-wheel drive as the standard but all-wheel drive can be fitted at an additional cost. The front-wheel drive models have the start-stop system to increase fuel efficiency but no word on whether the AWD models will come equipped with this feature. For now, if you want stop-start you’ll have to go for the FWD. 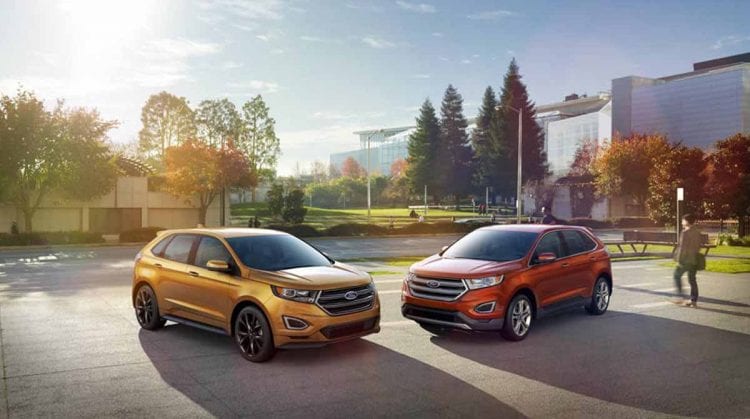 The four-cylinder is a good unit, especially when you compare it to Kia’s alternative found in the Sorento. The 0 to 60 miles per hour sprint took 8.3 seconds which is half a second better than the Sorento, but when compared to the Murano’s standard V6 it’s lacking by nearly a good second.

Still, one thing it has going for it over the V6 is fuel consumption. It manages to return 24 miles per gallon on the combined run for the front-wheel drive version but expect the number to drop to 23 on the all-wheel drive one. 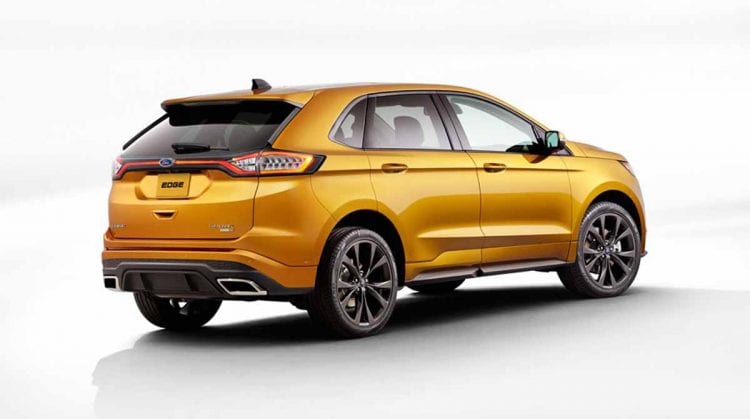 If power isn’t enough for you from the four-cylinder, perhaps you’ll be happier with the 3.5 liter V6 engine. It’s good for 280 horsepower and 250 pound-feet of torque. It is only available in the SEL and Titanium however so keep that in mind.

What it makes up for in power it lacks a bit in the economy. It can’t beat the smaller four-cylinder with its 21 mpg or 20 mpg depending on which model you go for, whether it’s the front or all-wheel drive one respectively. 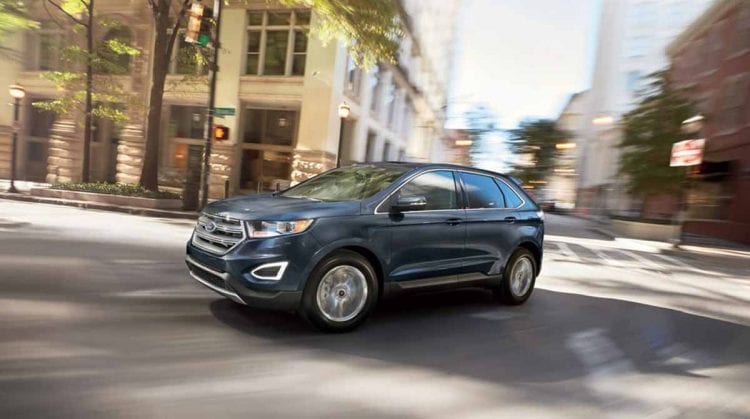 If you’re still lacking in horsepower, go for the 2.7 liter V6 found in the Sport. We should mention this engine option is exclusive to the Sport and is only available in all-wheel drive format. It does, however, produce a healthy 315 horsepower and 250 pound-feet of torque. It’s not only able to match the 3.5 liter’s fuel economy of 20 mpg but it is also a slightly faster option in 0 to 60 mph, that’s not a bad at all.

All of the engines are great reliability wise, however, the 2.7 is definitely the one to go for if you prefer the sportiest one. Due to this, however, you should not go for this engine if towing is your thing. If you need more capable towing machine we strongly suggest checking out other models in the segment.

The sporty 2.7 can only tow up to 2,000 pounds because it can’t be equipped with the tow package. Other units in the lineup have towing capabilities of 1500 pounds and with the right equipment, this rating goes to 3,500 pounds which are far from enough for most drivers. 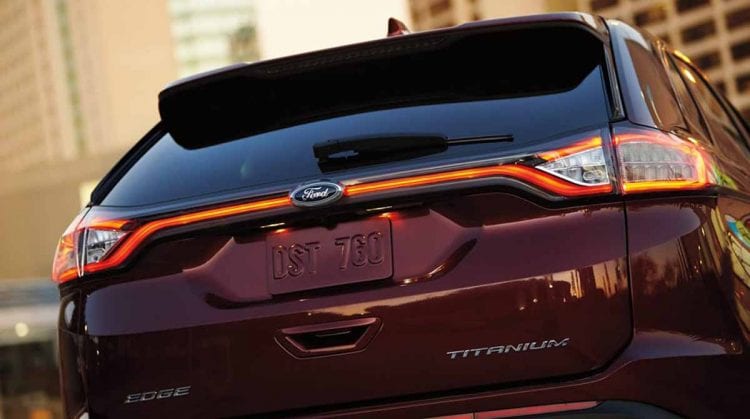 The fact that it’s not excessively big gives the Edge good road characteristics. This reflects in its car-like compliance and excellent body-roll which has been kept to a minimum. It really does feel like a bigger sedan.

The suspension, steering, and even brakes all give that impression with the exception of the raised ride height and the upright driving position. The famous road noise and wind noise present in most big SUVs are completely eliminated here, and we reckon the Edge can give even a Lincoln MKX a run for its money.

Outside appearance is a matter of personal preference, but we think the Edge is an okay looking car. It’s nothing exceptional but it’s by no means ugly. 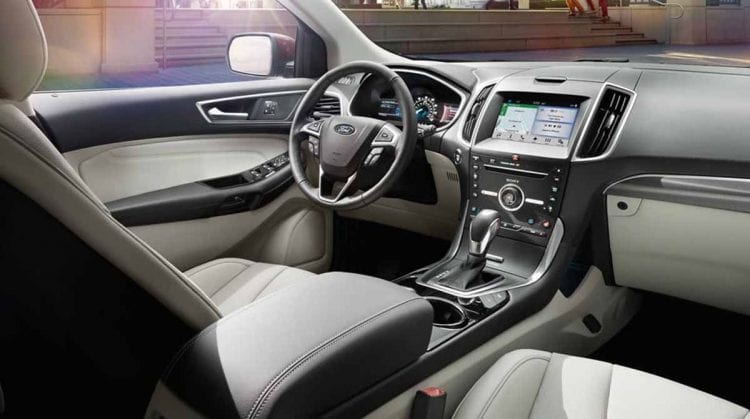 The interior, however, is a different story. All of the materials are of the highest-quality variety making every surface inside the cabin soft and pleasant to the touch. The only downside is the plastic feel of the center stack but should you opt for the Sync 3 system this gets heavily improved.

There’s more than enough room in the front seats and there’s plenty of adjustabilities so you can find perfect sitting position and fatigue free rides. The second row of seats has plenty of head and legroom and because it’s wide it can even sit three across, even if they are adults. 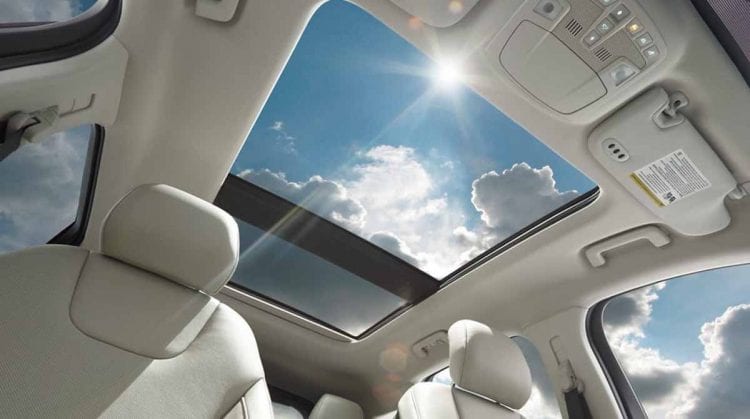 Cargo space is class topping too. With 39.2 cubic feet of available cargo space, it’s one of the best in the segment. Should you fold the seats down you get a jaw-dropping 73.4 cubic feet and possibility to load large and bulky cargo.

The 2016 Ford Edge is a vehicle that dominates its segment. It found a niche segment, established its strengths and its sticking to them. Prices start at slightly below $29k or to be more precise at $28,700 for the four-cylinder and go up for the V6’s accordingly.

Sports trim that is available for $40,900 brings 2.7-liter V6 EcoBoost unit and all-wheel drive system as standard. All in all, a well worth investment.