The hybrid market is perhaps the most significant one at the moment. Fully electric cars aren’t ready yet, but they’re getting there, and petrol/diesel vehicles are slowly dying out, that much is immediately apparent. The hybrid is a sort of crossover vehicle to take us out of the world of gasoline and into the one of electricity. It combines the best of both technologies at the moment, bringing us improved performances and higher efficiency. A hybrid can be almost any vehicle fitted with both an electric motor and a gasoline engine. In fact, that’s the definition of a hybrid. As far as they go, we’ve seen everything from efficiency dedicated Priuses to performance oriented McLaren P1s and Ferrari LaFerraris.

Succeeding in the world of mainstream hybrids definitely isn’t an easy task. The research found out that vehicles which are offered as a hybrid alone are far more likely to succeed and gain popularity than hybrids based on a vehicle which also comes with a standard engine alone. 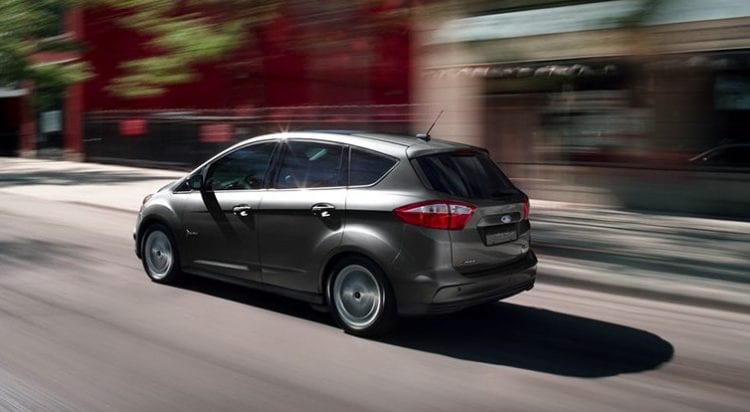 Some people go as far as saying that the real reason the Prius caught on so much popularity as it did because it couldn’t be confused with anything else. The word Prius became synonymous with hybrid since it was only offered as a hybrid by Toyota. Well, Ford has done the same with their C-Max. Rather than making a Focus Hybrid they decided to make the C-Max a stand-alone hybrid model

The C-Max is what’s called a compact MPV, but it is also close to hatchback looks. The segment is mostly popular in Europe since it combines a large spacious interior with relatively small and compact exterior dimensions. That’s ideal for the smaller streets of Europe. The U.S. never liked small MPVs like this one since they had the option to get SUVs if they wanted more space, or a standard wagon/sedan if not.

The C-Max is based on the same platform as the Focus but is noticeably taller. For Europeans, that’s not an issue since a lot of vehicles are tall and narrow. The U.S. market doesn’t welcome it as well. Most Americans think it looks disproportionate and ugly. 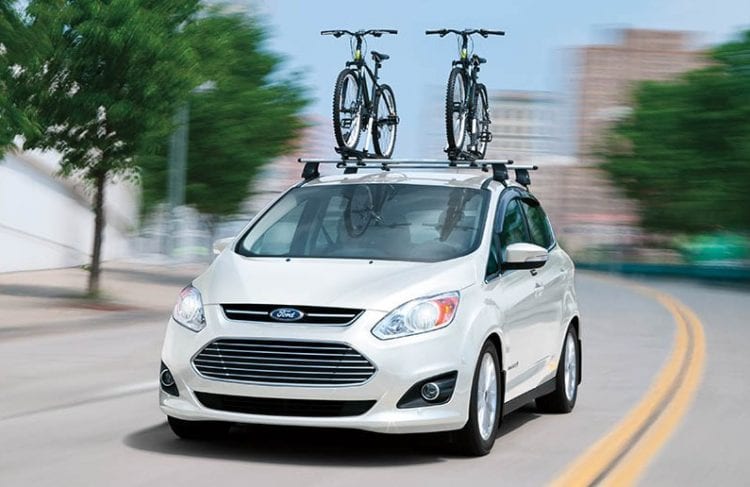 Well, to address some of the issues people have been having with it, the C-Max has received a facelift. The front fascia has been revised, with the Aston-Martin-like grille at the bottom and much slimmer headlights just like the rest of the Ford lineup. The back sees different taillights, but they don’t change the look as drastically as the front ones do. 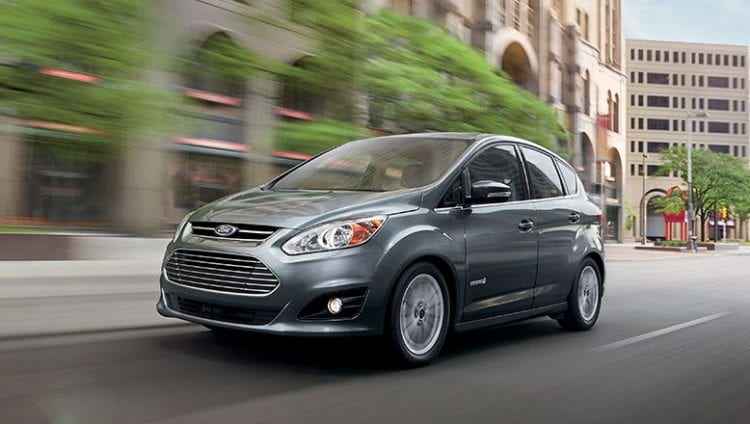 The C-Max is 63.8 inches tall, 173.6 inches long and it has a wheelbase of 104.3 inches. It is 72 inches wide if you exclude the mirrors and 82.1 with them. It’s by no means a large vehicle, especially compared to most that are offered on the U.S. market, but it is very tall. If that doesn’t bother you at all, read on and find out more. We have a feeling you’re going to like it even more.

The interior is good but nothing special when compared to the Focus or the rest of Ford’s lineup for that matter. The basic Ford C-Max Hybrid is okay, but if you want even more, you are going to get the top C-Max Energi version. The leather interior can be specified in Charcoal Black or Medium Light Stone. As standard you get leather seats, ambient lighting under the dash and on the door panels themselves, the great Sync 3 infotainment system, Sirius XM radio and everyone’s favorite heated seats.

As options, there are Sony Audio with Sync 3, HD radio as well as navigation, an Audio and Navigation package with voice activation and Sirius XM. There are other, less important options like all-weather rubber mats costing $175, but that’s just ridiculous in our book especially since you can get much cheaper but equally good aftermarket ones for a lot less. 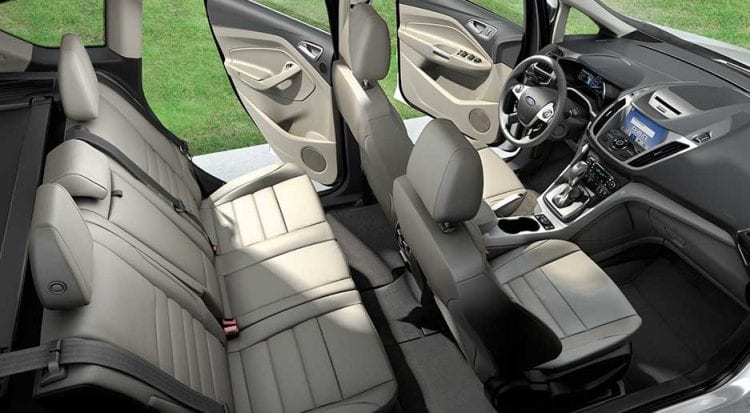 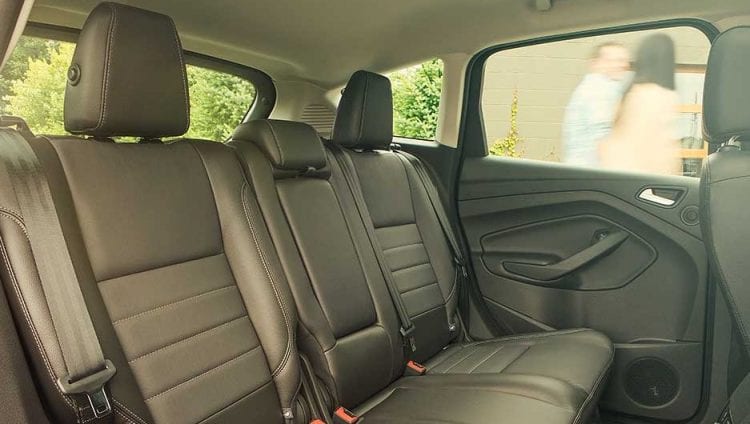 This goes without saying, but if you’re looking for the best interior in the segment, you’re probably going to end up with the Ford. The basic interior is enough for most people as it comes with lots of stuff. We would, however, go for a few luxuries as they’re not that expensive, just don’t overdo them. The ambient lighting is great and so is the infotainment system, which is user-friendly and intuitive to use, especially now with upgraded Sync 3 system.

Overall we can say that we really like it. The materials are great, and so are the fit and finish. It’s below that of the Focus, but then again, it’s not competing against it. It absolutely smashes most of its competitors and, to be honest, it can’t compete with Audi or a Mercedes that have a lot more to offer, but those are almost 50% more in terms of price.

The drivetrain is the same as that in the Fusion Hybrid. Both the standard Hybrid and the Energi versions utilize a 2.0-liter four cylinder pumping out 141 hp and 129 lb-ft of torque. The C-Max returns 40 mpg in the city and 36 mpg on the highway, effectively giving it a rating of 38 mpg on the combined run. The Energi returns slightly worse figures, but that’s just because it uses bigger batteries which naturally, weight more.

Both options are equipped with a permanent magnet AC synchronous motor with the difference being in the batteries that power it like we said. Whereas the standard C-Max Hybrid has to do with just 1.4kWh, the Energi (plug-in) has 7.6kWh. If left in sustain mode, the battery can push out 35 KW. If you want to use it as a source of power, it will deliver up to 68 KW. If it’s plugged into a standard 120-volt outlet, it will take around 7 hours to charge fully. Slap it on a 240-volt plug however and that time drops down to 2.5 hours. 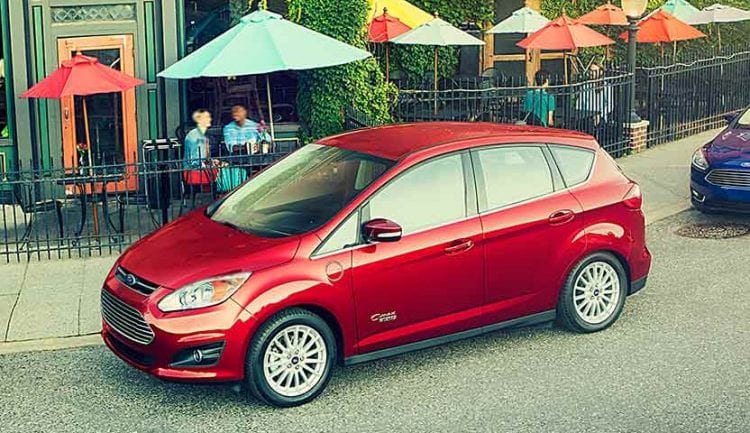 Driving it on electricity alone you’ll be able to cover 19 miles and reach 85 mph. The top speed along with the engine is 102 mpg and everything totaled gives the C-Max Energi 168 hp when in sustain mode and 195 hp in depletion mode. These might not be figures to brag about but when you are capable of getting almost 40 mpg you can accept few disadvantages like this.