In the midst of so much new and majorly overhauled models for 2016, it might be too easy to forget those who only receive minor updates or none at all. A car which falls into that category is the Chevrolet Traverse. With so many models from Chevy getting their own upgrades and facelifts it’s simple to put the Traverse into the carryover category. While that’s not far from the truth, the few updates that it does get take it a long way. Namely, it gets faster connectivity for the OnStar system in the form of 4G LTE; there’s a Wi-Fi hotspot feature, and a brand new entry trim has been added, called the Base LS.

This segment is in no shortage for an eight-seater at the moment. Just ten years ago, however, that wasn’t the case. If you wanted a big vehicle with eight seats, you had to go to the minivan or some of the largest SUVs available on the market. Today there are a lot more options, however. Amongst the typical array of Japanese and European cars on offer and even American ones, the Traverse is still one of the, if not the best. 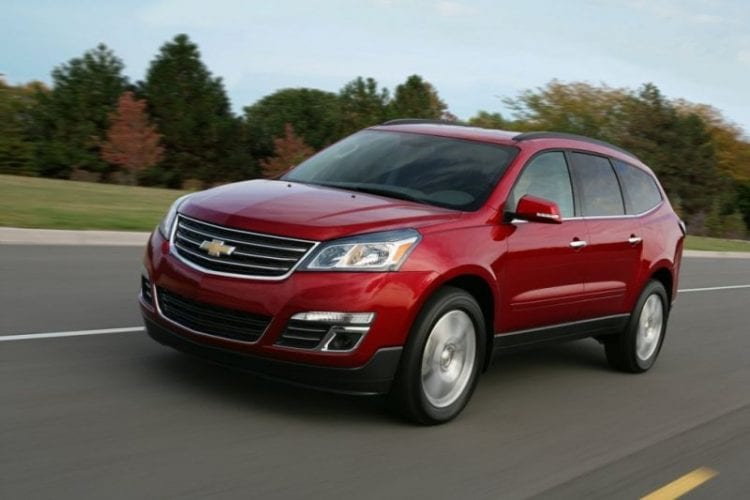 Let’s get the most important thing out of the way first. This is a really big SUV. It can be configured to carry seven or eight people depending on how you specify it. There aren’t four or more trim options like we’ve gotten used to seeing from Chevy, but it is pretty close. The three trims to choose from are the LS, the LT, and the LTZ. Here’s where it gets tricky. It wouldn’t be Chevrolet if they didn’t introduce even more sub-trims and confusion into the mix. So, the LS is divided into Base and LS, and the LT has 1LT and 2LT sub-categories.

The lowest Base LS model (dubbed 1SM) has 17-inch steel wheels (no alloys here), roof rails, a rather good looking rear spoiler, automatic headlights, air conditioning for the front and the rear, 60/40 split-folding rear benches, cruise control, OnStar telematics, Bluetooth connectivity and a 6.5 inch touchscreen display which houses the view for the rearview camera. The six-speaker sound system is rather good, but it’s not a particular high-quality brand. There are two USB charge points, as well as a USB and an auxiliary jack for the audio. You can only have this trim in front-wheel drive guise but more on that later.

The LS (called 1LS) gives you a satellite radio as well as the option to get your Traverse fitted with the all-wheel drive system. You do get some other optional toys and gadgets not available on the Base LS but unless you plan on getting them there’s no point in buying the 1LS over the 1SM. 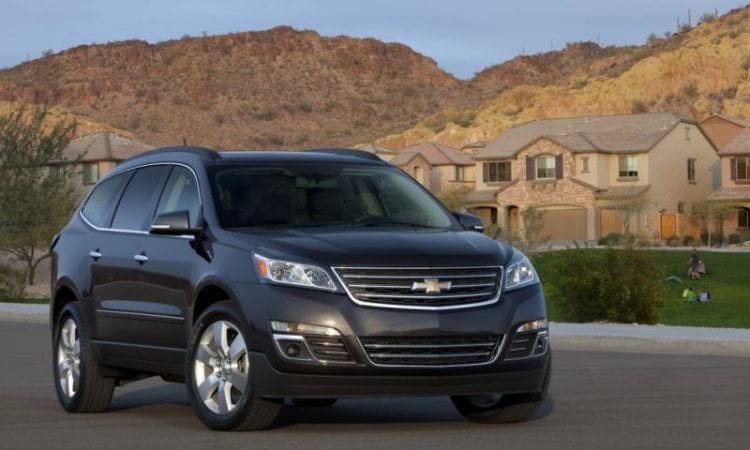 The 1LT trim is a rather major leap forward when compared to the base models. You get larger 18-inch alloys, this time, an airbag for driver and front seat passenger mounted between the two front seats, rear parking sensors, a driver’s seat that’s eight-way adjustable, heated mirrors and a steering wheel wrapped in leather. 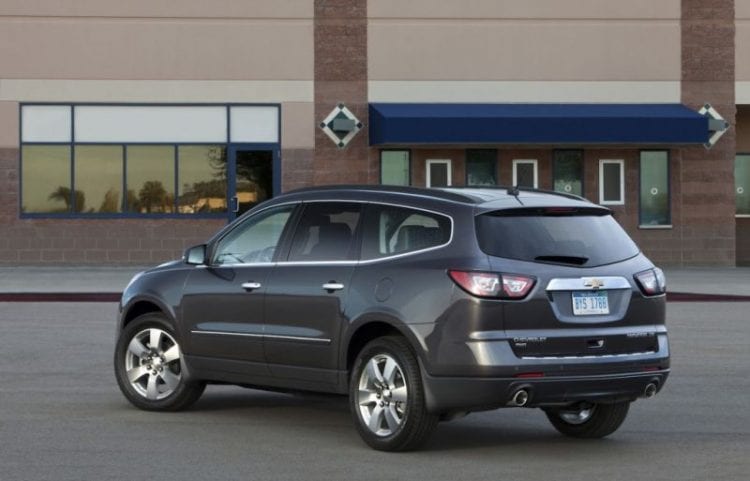 The 2LT is an upgrade to the 1LT. It gets all of the above features plus a power liftgate, heated seats (in the front), captain chairs for the second row, a rearview with auto-dim technology, tri-zone climate control and audio controls for the rear seats. The addition of the MyLink infotainment is also a nice touch, including Bluetooth audio, voice controls and a great sound system from Bose with a staggering amount of speakers (10 to be exact). 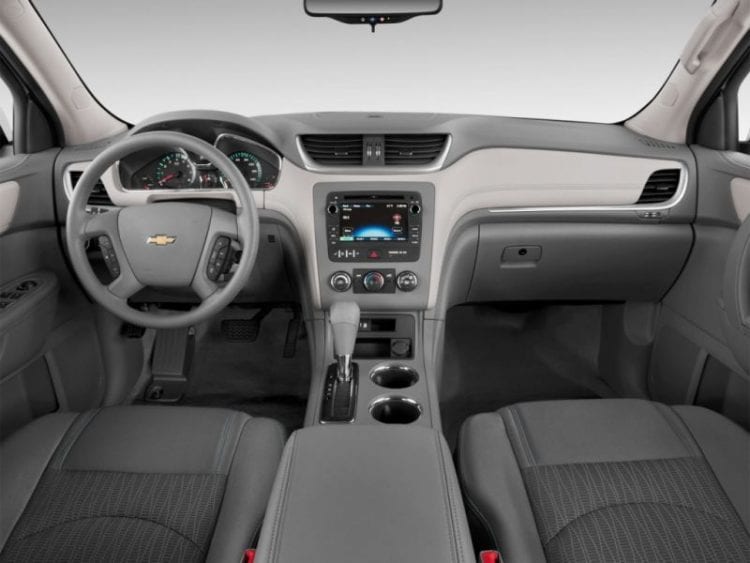 Step up to the flagship LTZ model and you get massive 20-inch alloy wheels, blind-spot monitoring, forward collision warning, electrically folding mirrors and an alert for lane-departure. The interior of the LTZ gets leather upholstery, memory function for the driver’s seat and ventilated front seats. The second-row of seats becomes captain’s chairs as standard too so it easier to access the third row plus the second-row occupants have more space.

The interior is quite roomy as you can imagine. The cabin space feels extremely open and generous. The materials aren’t the best, but they are more than decent. It depends on the model you get, but even the lowest trims can be described as pleasant. The top LTZ, on the other hand, is borderline upscale.

There’s a lot of legroom and headroom for all occupants and yes, that includes those in the third row. It’s still not a match for the excellent new Honda Pilot but then again, what is right? Don’t expect to fit adults in the third-row as they will most probably complain all the time or might not fit at all. It’s designed for children and smaller adults, but that’s usually the case with most seven plus seater SUVs, so we can’t complain. 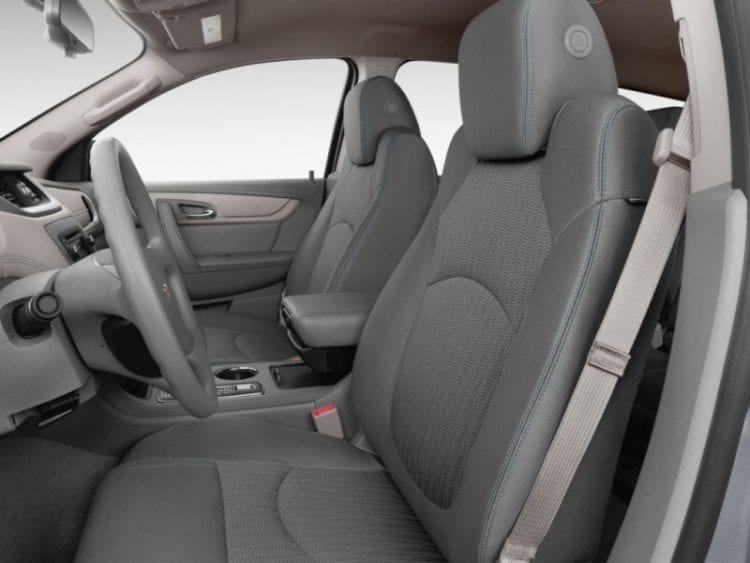 There’s just one engine on offer, and it is Chevy’s well known 3.6 liter V6. In this application, it develops 281 hp and 266 pound-feet of torque. The LTZ gets 288 horsepower and 270 pound-feet of torque thanks to dual exhaust outlets, freeing up the airflow, resulting in the power bump we can see here. The engine is mated to a six-speed auto as the only option, so no manual gearbox we’re afraid. Not that anyone would choose a manual in a seven seater SUV but still, it’s ours to mention it.

You do however get a choice between front wheel or all-wheel drive. Apart from the base LS model that is (as we previously wrote). The top flagship LTZ model reaches 60 miles per hour in about 8.1 seconds. Not exactly fast, but not too bad. It redeems itself with a towing capacity of 5,200 pounds, standing in at just above average for the segment.

It returns 18 miles per gallon on the combined run if it’s the front-wheel drive version in question otherwise expect 17 mpg for the AWD one. All in all, not that bad, something we could expect from a vehicle of this size. Average results but nothing surprising. 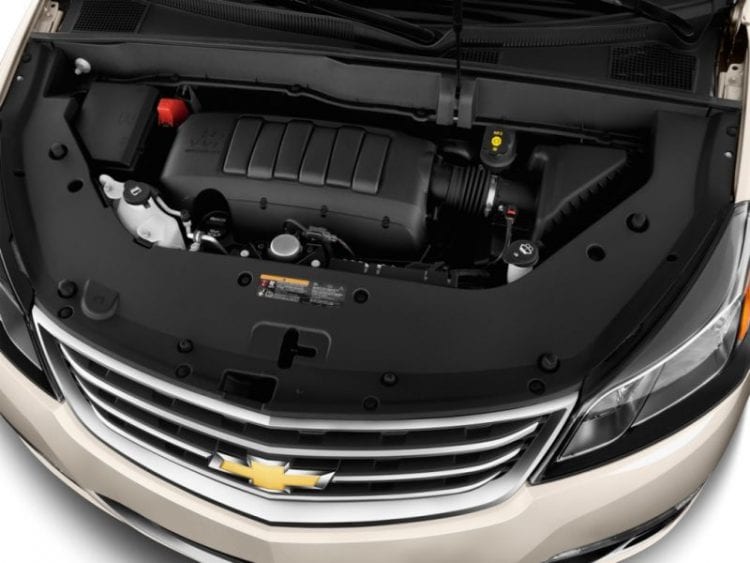 The 2016 Chevy Traverse can be had for just $28,700 and even it’s probably one of the best vehicles in the class, we suggest taking a look at the Pilot first as it very well might be THE best car in the class. Higher trims are offered for $31,205 in case you choose the LS version and $34,005 if you opt for the 1LT model.