We first saw the Ciel concept a few years back when it was unveiled. The year was 2012 and the Cadillac Ciel was at that time one of the most stunning concept cars. Four years and we can still agree that it looks fantastic and that it hasn’t aged one bit. If anything, it became even more gorgeous. One really interesting thing is how much current Cadillacs resemble the Ciel concept. Not just in terms of exterior styling, but interior and engine department too.

It just goes to show that concept cars aren’t as ridiculous or pointless as some people think they are. They are effectively a preview, a slight glimpse into the future of the company, giving us a taste of what future products will look like. More often than not, the following models stay true (at least somewhat) to the concept cars. The goal of Cadillac with the Ciel was simple: give the people a modern-day Cadillac for all generations. We have to say that the Ciel managed to pull that off. It had heads turning left and right. Anyone from the age of 8 to 88 wanted to know what it was and sit in it. Perhaps that’s the beauty of concept cars, they bring people together. 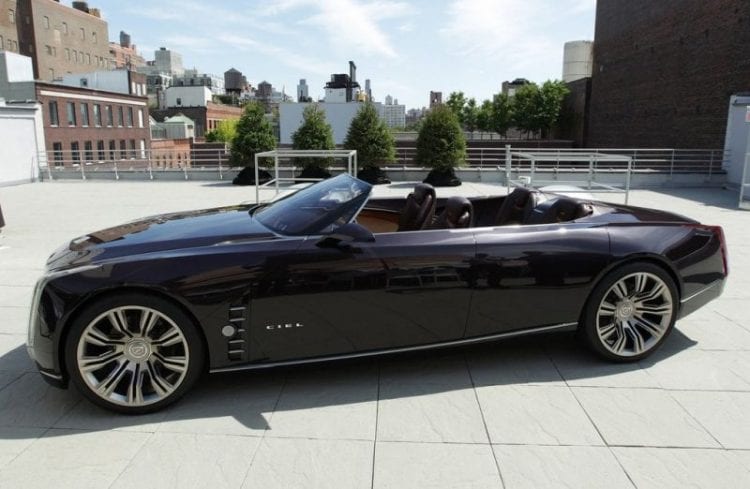 As if it wasn’t already obvious, let us give you an explanation of what the Ciel is. You see, even if it doesn’t get actually built, a car of its stature and luxury will eventually. A car to compete against the finest luxury sport coupes on the planet. Its competition? Anything that’s fast and luxurious, is extremely long and has a pretty large price tag. Think BMW 6-series coupe, Audi A7, Mercedes SL or perhaps even a Ferrari California. It’s tough to classify it in a certain category when you don’t know the exact details regarding price, power or anything for that matter, but based on what we do know, the Ciel is a car of many attributes. It can easily go toe to toe with the most luxurious vehicles, but it’s no slouch either.

But before we get to all of that, let’s just state the obvious: the Ciel is handsome. This car doesn’t need luxury or speed to win you over; the looks can do that all on their own. Just look at it. It’s like a long spaceship, a car from another dimension. The proportions are just fantastic, the waistline is incredibly sculpted, and the angular design really fits in the whole Cadillac theme. The V-shaped grille holds the Cadillac badge proud, and it’s massive we have to say. The vertical headlights form a U-shape with the bottom chrome accessory piece, rounding off the front fascia of the car. The wheels are huge, featuring a 9-spoke design on fat tires. 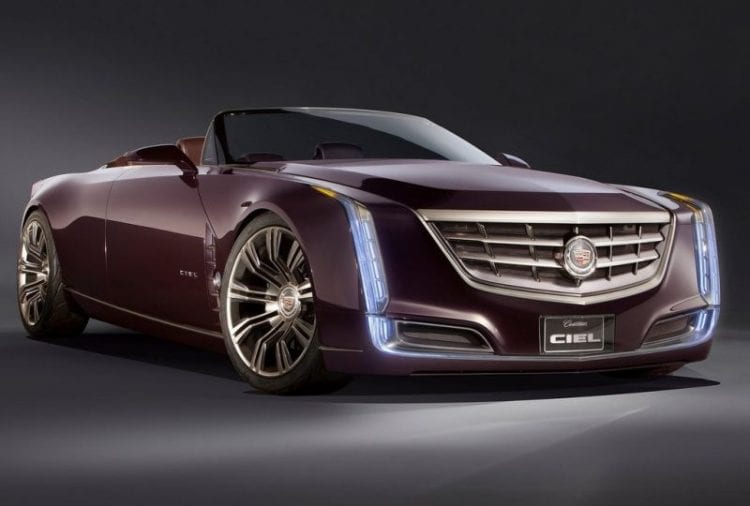 As you start to move away from the front and go further to the back segment, you realize how elegant the entire thing is, even if it is striking and visually in your face with all of the angular lines. The back of it slims down both in width and in height, forming a cone shape almost. Like a fighter jet, but obviously, there’s no jet engine at the back, unfortunately as that would sit there perfectly. Instead, there are just two vertical taillights mimicking the front ones almost identically. The rear mufflers are just below them housed in two vertical shaped squares.

The lines of the boot follow into the back too, forming a V-shape as well. The back of it is as symmetrical to the front as possible. Then you have the line going all the way from the front wheel to the back end. It swoops upwards to just under the taillights, showcasing that jet-like rear end we mentioned. We know you’ve heard the line that beauty is in the eye of the beholder before, but we think the Ciel is handsome universally. It may not be everyone’s cup of tea, but you can’t say it’s not elegant or visually pleasing because it just is. We can say only two things about it: Cadillac has done an amazing job with the design of the Ciel, and we can’t wait to see a production car that looks like it. 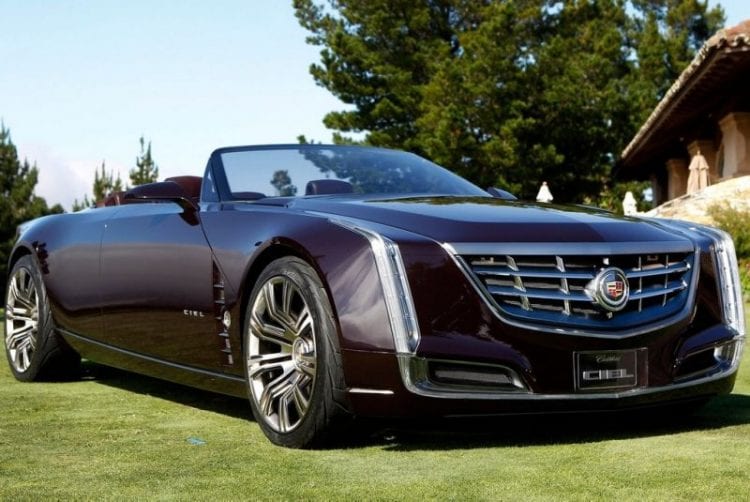 The interior isn’t so interesting because it’s only slightly more appealing than a normal Cadillac’s but even then, it’s not bad. The dashboard has the same swooping theme going on except this time, it’s angled towards the driver. The instrument cluster behind the steering wheel extends to the passenger in a fin-tailed look almost. The center console below is low, and the tunnel goes all the way to the back where you find just two seats. This is a luxurious coupe after all, so there’s no point in giving it more than two seats at the back. The tunnel provides some storage room, and it houses a host of buttons and switches below for controlling every imaginable thing. Used materials are superb. You have everything from genuine leather to real wood on the center console. The fit and finish are great, and the only thing we didn’t really like was the fiddly steering wheel but other than that, great job Cadillac. 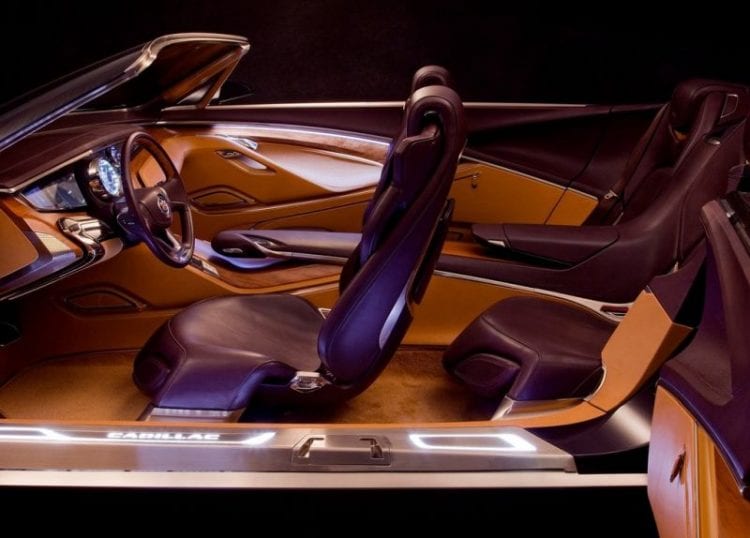 We don’t have any details regarding what’s under the hood, but it’s safe to assume it’s probably a 3.6-liter V6 with more than 420 hp and 430 lb-ft of torque. It’s a variation of the engine found in the ATS-V although, given the age of the Ciel, it just might be the old 6.2-liter V8. In the supercharged form, you’ll remember it made over 500 hp. Now that is some serious firepower. 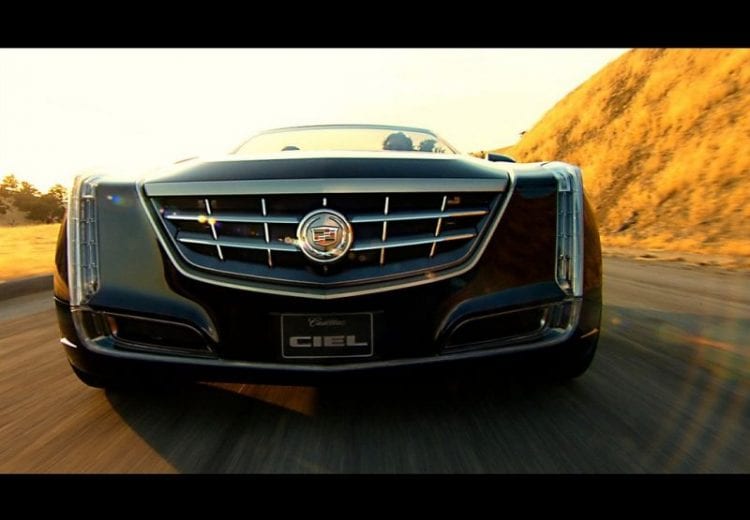 Again, no release dates or prices here as it’s not an actual model, i.e. you can’t buy it. Well, not this exact one anyway as we’re sure Cadillac won’t sell it to you. But if you do happen to have a few million dollars in your bank account and ask very politely we’re sure they would be more than happy to build and exact replica for you. Now all we have to do is raise a few million dollars, sounds easy right?