Buick’s image as a car manufacturer has been steadily growing in the last few years, in a positive sense of the word. The Buicks of old mocked for their reliability and less than up to par materials and finish are long gone, and in their place are new and modern vehicles, mostly built in a joint venture with other companies.
One such car was, and is, the Buick Regal. It originally started life as an Opel Insignia, or a Vauxhall Insignia for the people in the U.K., it was later rebadged as a Buick and sold under the name Regal. In all honesty, it turned out to be a great thing for Buick, saving their image and perhaps even the entire company’s existence. This move allowed Buick to attract more customers, and what is even more important those were younger buyers. 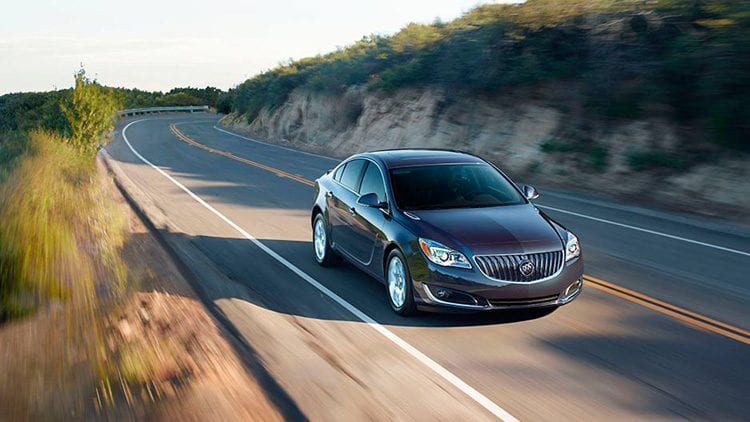 As is the case with most new cars, the 2016 Buick Regal 2016 Buick Regal for its mid-life span. Updates which see it lose the eAssist hybrid powertrain and rather strangely, a trip down memory lane with a return to the older 2.4-liter four-cylinder engine as a base model. An engine we first saw in 2012, and one we thought we’d never see again when it disappeared from the Regal range. More on that later, however.

There have been more upgrades of course. And most importantly, they’ve been done where it really matters. The IntelliLink system has been improved for better usability and an even simpler and more user-friendly interface, not to mention the added Apple CarPlay compatibility, something a lot of people need and want in their vehicle. The trim order has been revised a bit, and there’s a new package dubbed the Sport Touring. 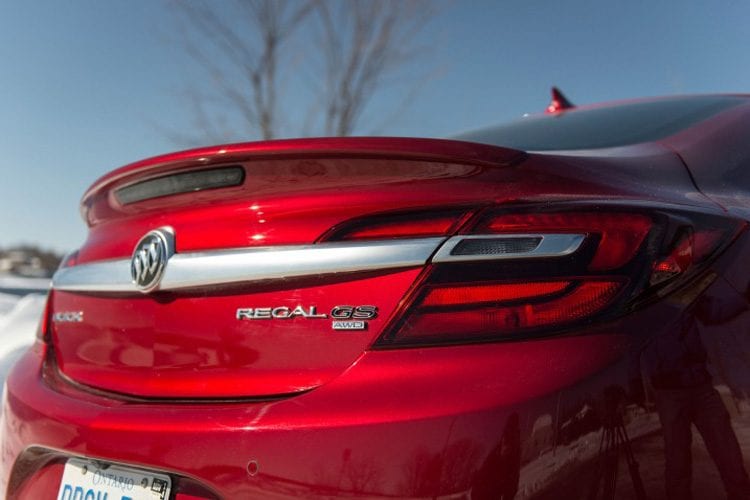 The Regal knows its strong sides, and it’s sticking to them. Things like a lot of features and gadgets for not a whole lot of money. If we’re honest, that’s a really good thing, since it needs everything it can get to compete with the best of the best in the segment.

Because what it has in gadgets, it lacks in engine performance and cabin space. The cabin space is virtually the smallest in this class. Things like the 3-Series or the IS trump it all day, not to mention the S60. Read on to find out if it can compete with the best cars in the segment.

Styling is an individual thing, we all know that. But you can’t help yourself liking the Regal. No, it’s not the most beautiful car, in fact, it’s not even that good looking. But it is understated and unrevealing, different and interesting. In the entry luxury sedan class, that’s really not a bad thing. 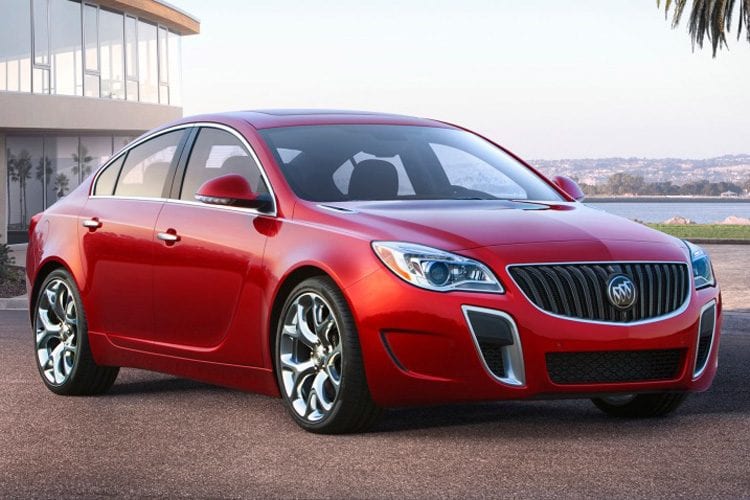 We can blame it for keeping the same styling for such a long time, but we’d have to blame Opel/Vauxhall since the Insignia is still the same. But who can complain really? The European model is a great success with the U.S. Regal the following suite. If you’re reading this, just maybe try to change it a little bit for next year eh Opel?

The interior is pretty much the same story as the exterior. It’s got the same styling, but what a styling it is. The dashboard is sleek and elegant with no repulsive features; everything is packed and combined more than decently surprising us with the fit and finish level. 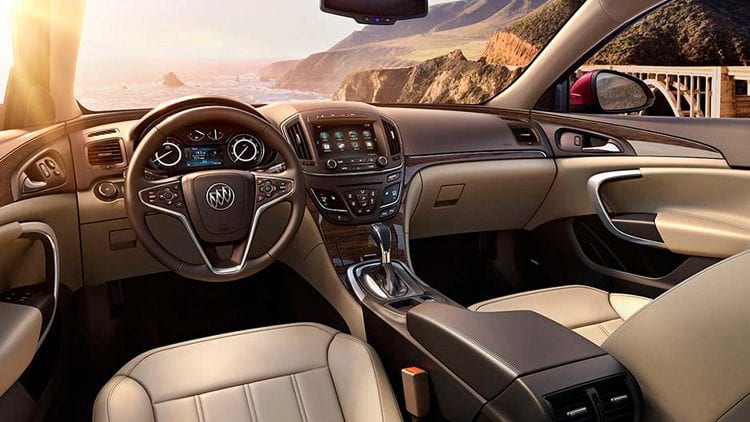 It’s just a nice long upscale look, and that’s the aura radiating from the entire cabin. It feels up-market even before touching any of the materials. Even if you do, you’ll agree with us in saying that they’re extremely high-quality. Everything you touch is soft and feels expensive, which is strong selling argument for the price point of the Buick Regal.

On the technology side, there’s an 8-inch touchscreen standard on all trims, powering the IntelliLink infotainment system. It’s a super simple system to use, especially with the large icons and fast response time of the screen. The controls are laid out beautifully and make sense logically, meaning you get used to the system in no time. Like we said, the big news for 2016 is the compatibility upgrade for Pandora radio and smartphones (CarPlay and Android Auto). There is no premium display option, but with a crisp and smooth 8-inch one you can’t really go more up-market for the money. 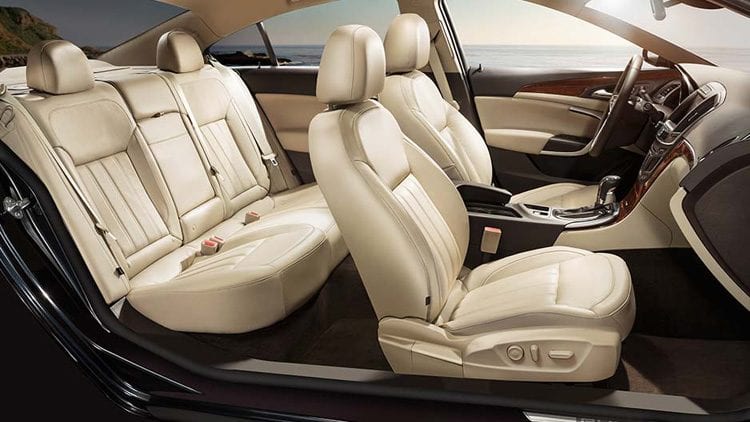 The front seats are comfortable, as are the rears, although where the fronts are roomy and spacious, the rears are not. There’s next to no amount of headroom for tall adults, and the legroom is on the small side. You can thank the elegant sloping roofline for this. Hey, it’s at least great visually from the outside so we will need to cope with limited space on the rear bench. There is 14.2 cubic feet of storage space behind the second row of seats, so that makes up for it a bit.

What do you think about 2018 Buick Regal Spy

The hood houses the older 2.4-liter four-cylinder in base trim. It’s good for 182 horsepower and 172 lb-ft of torque and delivers all of that power to the front wheels via a six-speed auto transmission. If you think it’s not powerful because it’s economical, think again. It manages to deliver an appalling 23 miles per gallon on the combined run. It needed around 10 seconds to reach 60 mph, making it one of the slowest sedans in the segment. 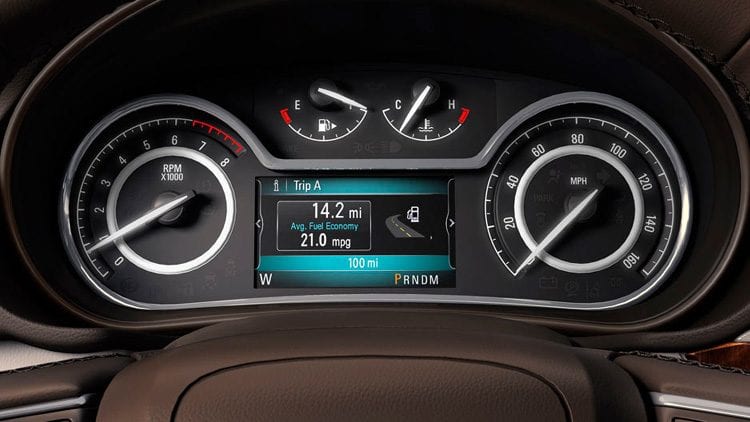 If you’re going for a Regal, specify a higher trim than the base, anything is better regarding engine lineup. All the remaining trims get the 2.0 turbocharged four-cylinder unit that we know and love. It develops a much nicer 259 horsepower and 295 pound-feet of torque. In standard guise, it’s front-wheel drive although you can opt for an all-wheel drive system. The GS offers the optional manual six-speed box; all the rest get a six-speed auto.

The turbocharged four-cylinder returns 24 miles per gallon on the combined run, a far better number than the weaker engine despite being some 100 hp more powerful. The all-wheel drive models are naturally a bit worse averaging just 22 mpg, which is still a pretty good result overall. 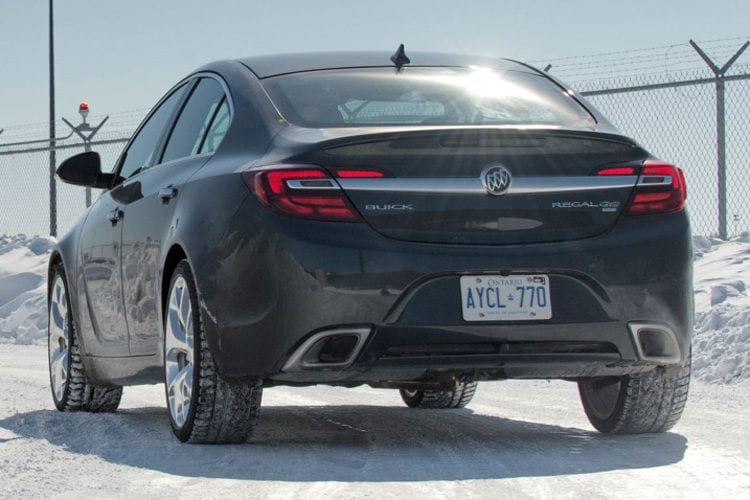 The car is nimble and agile, with a decent amount of feedback from the steering wheel. It’s really fun to drive in corners, and if you go for the turbocharged engine capable of reaching 60 mph in 7.2 seconds, it’s not bad in a straight line too.

We suggest you check out other cars from this segment first but at a starting price of just $27,065 it’s really a great proposal. If you want turbocharged engine, you will be able to get it in the second trim level that is conveniently named Turbo. It will push the price to $28,990 and if you want all-wheel drive version to be prepared to add almost $2,500.