The Detroit Auto Show saw the introduction of a lot of new models from various manufacturers. One of those was Buick that brought the Buick Envision. The name may ring a bell since Buick already debuted the car in China and it’s been on sale there for nearly two years now, first kicking off production in 2014. The Envision was always meant to be a global car, so it’s no surprise it reached the U.S. so quickly.
As you can see even from the pictures, the Envision isn’t a particularly large vehicle. It’s a compact crossover, meaning it will compete with the likes of Acura’s RDX, Lincoln’s MKC and even Audi’s very own Q5. Quite a tough crowd to beat but it is possible with the right offer. Still, Buick is adamant that the Envision will fair exceptionally well with the smooth ride and the “whisper quiet” isolation in the cabin. They also claim they’ve stiffened the chassis up and made it a more driver-focused machine.

Styling wise, the Envision takes a sheet out of Lincoln’s book. We don’t mean it’s copying the Lincoln design, but rather it’s got the same elements as those on the MKC. It’s a refined and elegant design, more pleasing and comforting than say the Q5. Whereas the Q5 is bold, aggressive and overwhelming this isn’t. It’s understated and almost timeless. Some may call it bland, but it’s got nothing to prove. The type of people who are going to drive it wants exactly that, elegance without much fuss.

On the sides, we see unobtrusive and elegant wheel arches which maintain the same flowing design found throughout the vehicle. They’re seamlessly bringing the front of the car and the rear together. The body line runs right over the front arch, swooping down to the bottom of the car forming a nice arc by itself, only to then dissipate into the rear arch in a smooth way. The second body line starts from the front door, running through the middle of the doors where the handles are, and it neatly integrates into the rear taillights.

The windows are really interesting. They feature a glass separator parallel with the mirrors, something reminiscent of the old commercial vans and their rotating glass. The back is shaped by the body line like we said as it goes into the taillights. The mandatory Buick emblem is naturally chromed, and it’s located just below the rear hatch wiper. The overhangs are pretty small, but it does house LED brake light. Below that you’ll find a reflector on each corner of the lower fascia with a single exhaust on either side. It’s not aggressive by any means, but the dual exhaust setup is a nice touch. 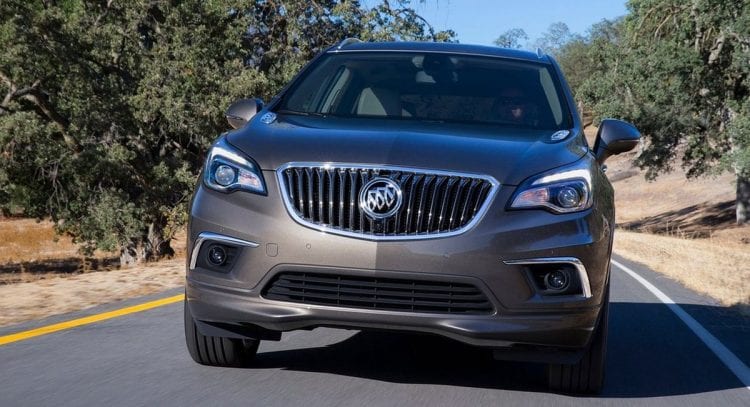 The interior is what sets this vehicle apart from a lot of its competitors. Simply put it’s on a whole different level to some of the vehicles in the Envision’s price point. The first thing to strike you is the styling of the dashboard. It seamlessly blends into the doors, almost like fading away and we like the way Buick integrated this. The cluster just behind the steering wheel has a digital speedo with analog gauges on both sides. The center of the dash houses the well-known IntelliLink system present in lots of other GM vehicles, but it can be upgraded with the OnStar system as well as a 4G LTE hotspot. The infotainment system is pretty standard for this segment; we’re talking about Bluetooth connectivity, SD card support, and MP3 player. 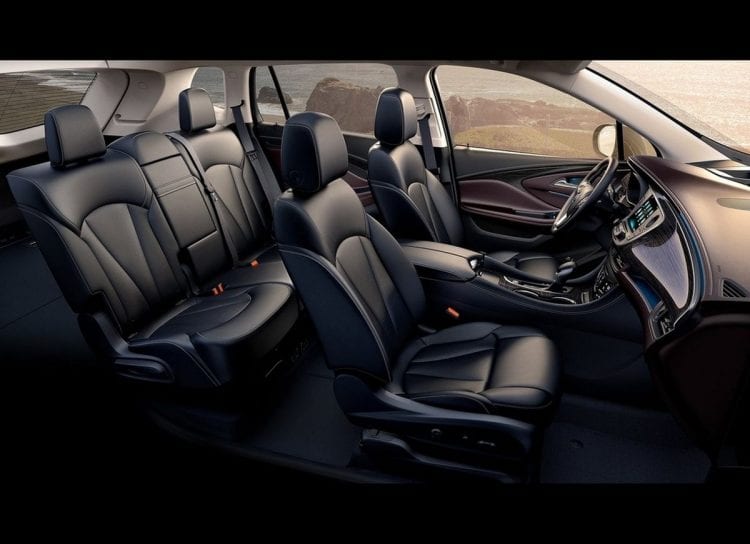 Scattered around the car, you’ll find 4 USB ports, four outlets with 12-volts and a single 120-volt one so you can charge all your mobile devices from smartphones to laptops. The steering wheel of 2016 Buick Envision is wrapped in genuine leather, and it has a new and different design along with brand new switches giving the driver full control of the infotainment system without even the need to lift a single finger off of the steering wheel. 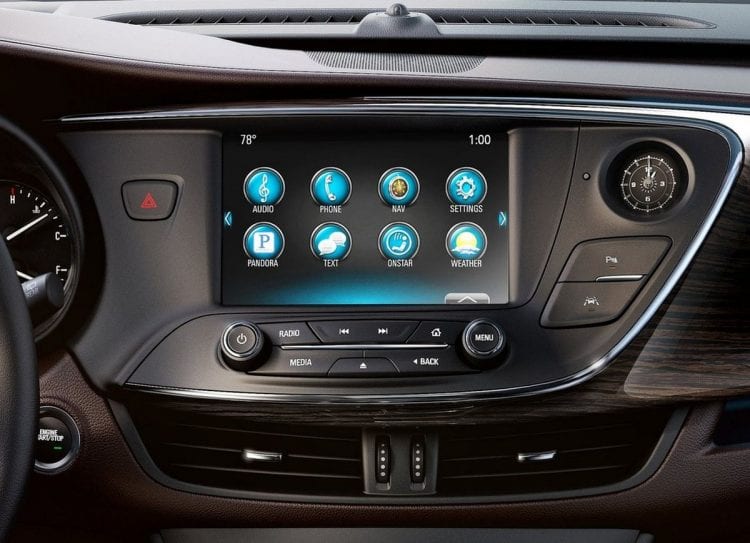 You’ll be glad to know there are heated seats for both the front and rear rows as well as for the steering wheel. If you want you can even spec your front seats with the cooling option something that we are used to seeing on much larger and more luxurious vehicles. The back seats aren’t fixed, meaning they can easily slide around giving a better configuration depending on what you want to do with the vehicle. Naturally the back row folds with a 60/40 split so you can get access to more space.
Cargo space is plentiful, and, in fact, it’s so plentiful it’s a lot more than what you’d find on an RDX or an MKC. The best thing is that it offers all of that cargo space without sacrificing any legroom or headroom which is not something a lot of vehicles can claim. The panoramic roof gives you an unprecedented view of the sky, this feature a lot of people love especially for night travels while it does give you an impression of the much larger cabin. 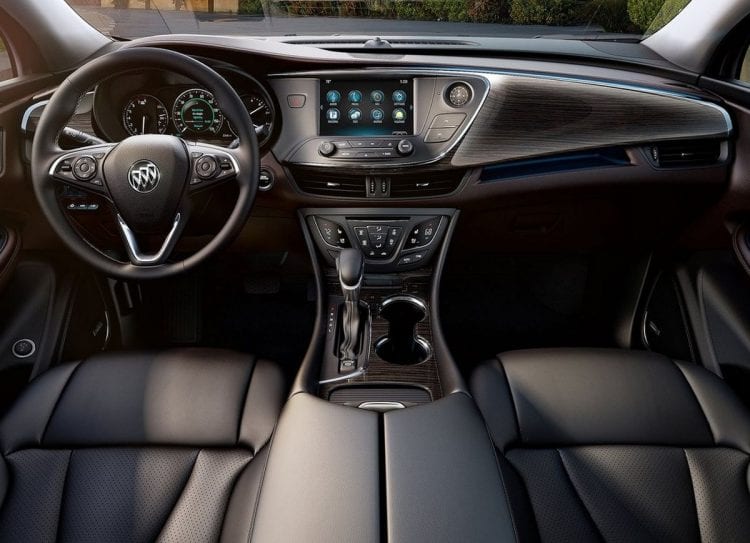 The hood hides a turbocharged 2.0-liter four cylinder developing 252 hp and 260 lb-ft of torque. If you think, that’s a lot you’d be right. It may not be able to match the best in the segment, but that’s 32 hp more than the base Q5. The unit is attached to the six-speed auto gearbox we’ve already seen do great service in other GM products. If you opt for this, in the beginning, you can get your 2016 Buick Envision with a Twin Clutch all-wheel drive system which is GM’s first active system. It only engages when it feels the need to. Otherwise, it’ll simply roll the car along with just the front wheels conserving fuel and wear and tear. 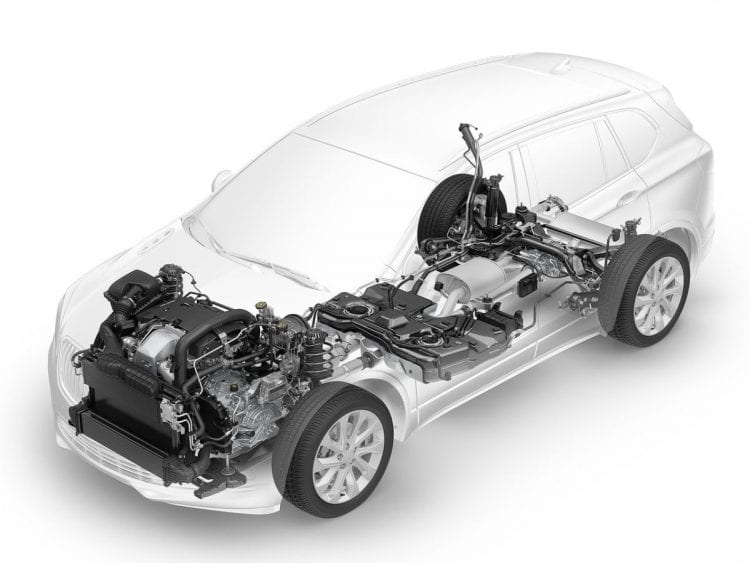 To ensure the ride is smooth and comfortable there’s GM’s complex HiPer suspension. Why is it so complex you might ask? Well, GM claims that despite looking identical to a normal suspension, it uses some algorithms and programs to offer a better steering, reduce the noise and improve the cornering capabilities.

We have to say for the most part it does a really good job. It’s well damped and keeps the body roll in check very nicely. It’s by no means a sports car, but it doesn’t let you toss around the car a lot when cornering. For the luxury crossover, it is, it fits the role superbly giving you decent handling and more importantly smooth ride. 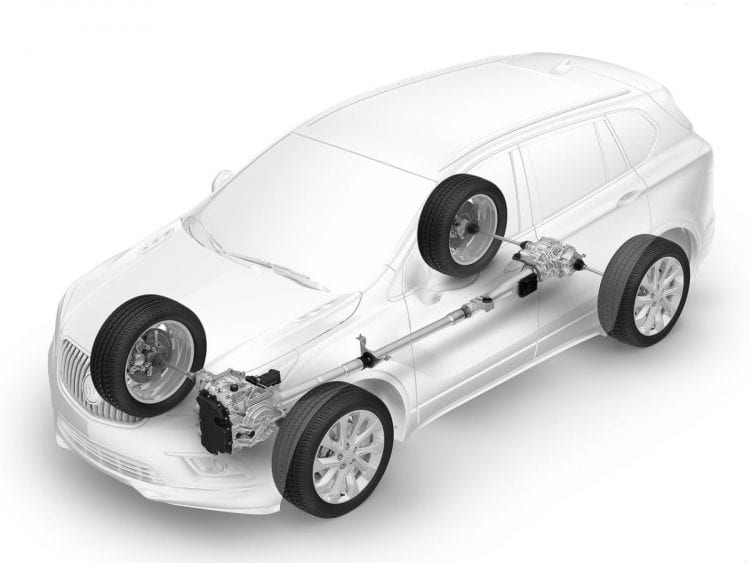 The prices start at slightly above $42,000. Granted that is a lot, especially for the level of performance you’re getting which isn’t anything special but look at it this way: The 2016 Buick Envision is properly loaded with technology even in the base model.