The original BMW X1 was a great success for BMW. It took the small SUV segment by surprise, capturing the hearts of many owners who later even went on to buy the X3 or X5. For a long period, the BMW X1 stood uncontested as the best small SUV money could buy. The X1 was first introduced in 2009. It was the smaller brother to the X3, X5 and subsequently the X6, and was presented after all of them. It received high praises mostly for its powerful and economical engines, but also for its brilliant car-like driving dynamics and famous BMW reliability. In 2015, it was sold in over 700,000 examples, becoming one of the company’s best sellers.

Here we are, some seven years later, and the Germans have introduced the second-generation of the X1. As good as the first one was, the large popularity of the small SUV market meant that competition grew fiercer than ever, with brilliant cars spawning from most countries and manufacturers. The X1 was suddenly dethroned. Well, hopefully, the new X1 for 2016 changes all that, and brings it back to its rightful status as the top car in its segment. Read on to find out all of the details, including an interesting turn of events you might not have seen coming.

The exterior of the second generation X1 is more of an evolution rather than a revolution, and this is something we are pretty much used to see from BMW. It hasn’t been completely changed, but rather borrows some styling cues from the bigger X3 and X5 models, and implements them in a tribute design to the previous X1. The old version was largely critiqued for being the odd bunch in the group. It performed flawlessly, but it was never a looker. This one changes that and now we are finally getting a car that many will fall in love with.

Beginning at the front, we find bigger traditional BMW kidney grilles and more elongated headlights. Below, there are larger fog lights and much larger air intakes, serving not only as a visual improvement to the last one but as a practical one too with the goal to deliver more air to the engine bay, brakes and similar. It’s much better looking, but with a dose of aggressiveness, the older X1 never seemed to have.

The side profile is the only thing that’s largely the same as with the older generation, and that’s only below the waist, the beltline. Speaking of beltlines, it’s the same one, keeping the original X1 shape. The area of the side skirts has been concaved in to make it appear slimmer, and the area above the waist features taller glass, a noticeably larger quarter window and even a more distinctively raked roofline.

The rear fascia hasn’t been left untouched, and it too has some small as well as large updates. The taillights, for instance, are a lot bigger and better looking than those found on the last generation X1. The tailgate is more distinctively sculpted, and the upper bumper doesn’t look detached from the rest of the car’s styling like it did on the old car. The distinct overall impression is that the new X1 is a scaled-down X5, which isn’t a bad thing at all, it certainly represents more attractive option than before.

The interior of the X1 has been completely redesigned. After so many years in service left largely untouched, we’re glad to see a large improvement. There are still cues and features from the old one of course, but the materials and fit and finish are on a different level which is saying something, considering the old one wasn’t that bad. Most drivers were quite satisfied with the offering, and now we are getting even more. 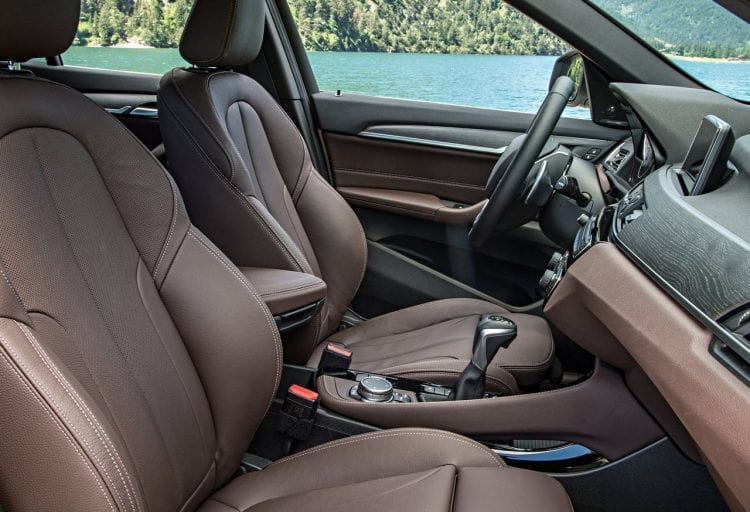 Cabin space has been increased, as well as luggage space. There’s 1.5 inches more legroom in the standard version, and 2.5 inches more if you opt for the adjustable rear seats. The seating position has been elevated upwards of an inch, giving the X1 that classic SUV is feeling behind the wheel. There’s 15 percent more cargo space, but that’s when you fold the rear seats down.

The dashboard features a more elegant and cleaner look, largely thanks to a “floating” display as well as smaller A/C vents. In the middle of the dash you’ll find big horizontal aluminum trim, splitting up the dashboard in two distinctive sections, nothing major, but a nice touch giving the car a dose of luxury which is really needed in this segment. 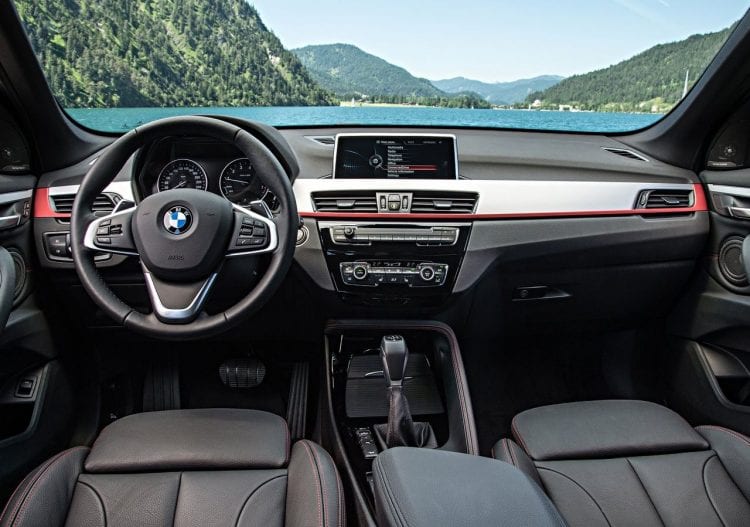 On the long list of all the standard features, you’ll find a brilliant audio system with seven speakers, a steering wheel wrapped in leather with multifunction commands and even adaptive cruise control. Because it is the small SUV after all, the standard seats are wrapped in cloth to keep costs down, but you can opt for leather too. Other options feature a bigger 8.8-inch display and a 12 speaker audio system from Harman Kardon. Oh, and there’s the mandatory M Sport package for certain customers, but these things can get expensive.

The European versions get different units and a lot of them. They can choose between diesels, gasolines, three-cylinder gasolines and even a three-cylinder diesel with 114 hp. In the U.S. however, you only get a 2.0-liter four cylinder developing 228 hp and 258 lb-ft of torque. Yes, we do realize that’s 12 horsepower down on the old model, but even still, the new X1 manages to be fastest in class with a 0-60 time of 6.3 seconds and a top speed of 130 mph, with the option to be increased to 143 mph. 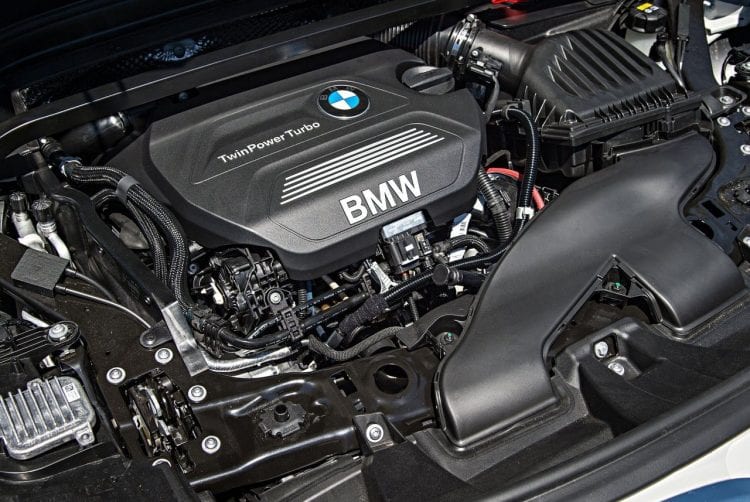 And here comes the kicker. The 2016 BMW X1 uses the UKL front-wheel-drive platform as the one found on the new Mini Cooper and 2 Series Active Tourer. Yes, you read that right, the X1 is now front-wheel driven. Thankfully, the U.S. version gets the xDrive only, with European models getting it as an optional extra on certain engine choices.

The four-cylinder engine is mated to the brilliant eight-speed auto, but even still, the main concern is whether a front-wheel drive SUV from BMW will still exhibit classical BMW traits. As soon as we get the one we will test and see if the front-wheel drive model is any good and fun like it was the previous rear-wheel drive car.

We rather like what we get on the paper, but you’ll have to try it out for yourself. The xDrive is brilliant, and the X1 is a proper beast of a car with it. Whether the front-wheel variants will live up to the hype, we’ll wait and see. The U.S. version starts at $34,800 for the base model.