The American auto fans were briefly teased by some BMW 1-series M coupes several years ago which were supposed to replace the iconic mid-1980 models. Since then, the interest in this series sparked and expanded to other countries, because the models were extremely well-made, fast, efficient, fun, and agile. However, the German manufacturer did not produce a single M-series vehicle after 2012, leaving everyone disappointed and eager for the next generation of the models. Naturally, the popularity of the coupes was noticed in the company, so they tried to bring some of the 1M’s features with the M235i model, which was very well-received by car guys around the world as well. However, it still lacked the charm, performance, and aggressiveness of the predecessors, so BMW finally decided to design the follow-up, this resulted in the creation of 2016 BMW M2.

The 2016 M2 shares the same formula with the previous models, but it’s designed with more modern components. According to many reviewers, the model has received some parts from the F82 BMW M4; this includes brakes, aluminum suspension, 19-inch wheels, and a limited-slip differential. However, it should be said that all these components performed more than satisfactory on M4 so that M2 will benefit from their addition. In fact, it prompted many to characterize M2 as M4 or M235i on steroids. Even though it was completely redesigned, M2 seems to be a worthy successor to the iconic M series of the 1980s. Keep reading to find out why.

There is only one body style for M2, two-door coupe, and it has been viewed by the manufacturer as the most efficient type to achieve the desired performance and to attract customers. It is provided in just one trim level but can be advanced with the optional Executive package. The list of standard features on the entry trim includes automatic climate control, heated seats, leather upholstery, BMW’s infotainment system, 10-way sport seats and an 8.8-inch touch screen display. If the customers want to get an Executive package, they should certainly do it because it includes some great additions, such as rearview camera, rear parking sensors, frontal collision warning, lane departure warning system, and heated steering wheel.

The legacy of M4 and M235i is clearly seen on the exterior and in the design of M2: it received pretty ‘aggressive’ styling design elements, which highlight the sportiness of the model. For example, it features the identical bumpers, massive air intakes up front, sculpted aero add-ons, and honeycomb grille. The updates more unique to this model are featured on the sides; for example, larger rear and front bumpers, and lowered suspension, which allowed the designers to lower the vehicle, even more, closer to the ground. As a result, we have better aerodynamics and better handling which is among the most important features for a car like this one.

The design of the cabin is similar to other M models, which is known for orientation to the driver and variety of sports features. For example, the dashboard is almost identical to the rest of M family, but it brings carbon-fiber inserts above the glove compartment. According to the test drives, the materials of the seats provided an excellent support even after several hours of riding, and remained fairly comfortable. The materials used in the cabin are appropriate for the entry-level luxury class as well as their quality. It is obvious that we do not expect to see the highest level of luxury in a vehicle like this since some other segments are more important. 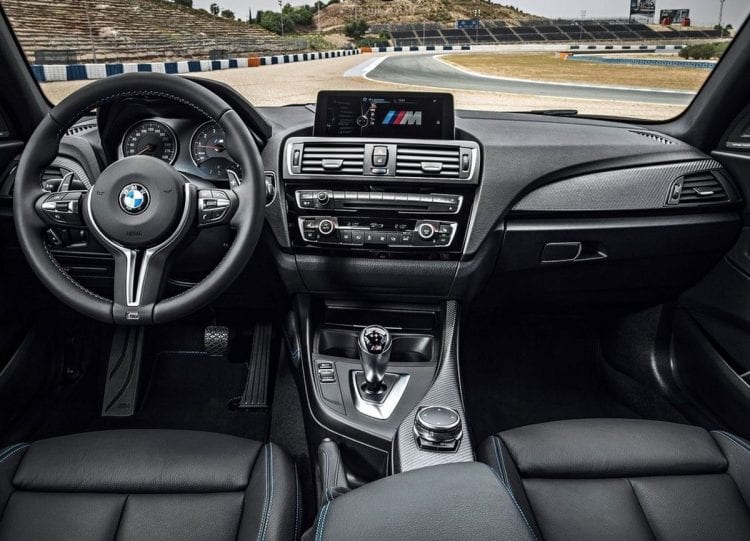 It was estimated that M2 has been provided with pretty generous cargo space for a two-door coupe, 13.8 cubic foot. As for other interior dimensions, the front legroom and headroom were 41.5 and 40.1 inches respectively, which are slightly reduced when an optional sunroof is installed. Dimensions are on the expected level and good for its class. 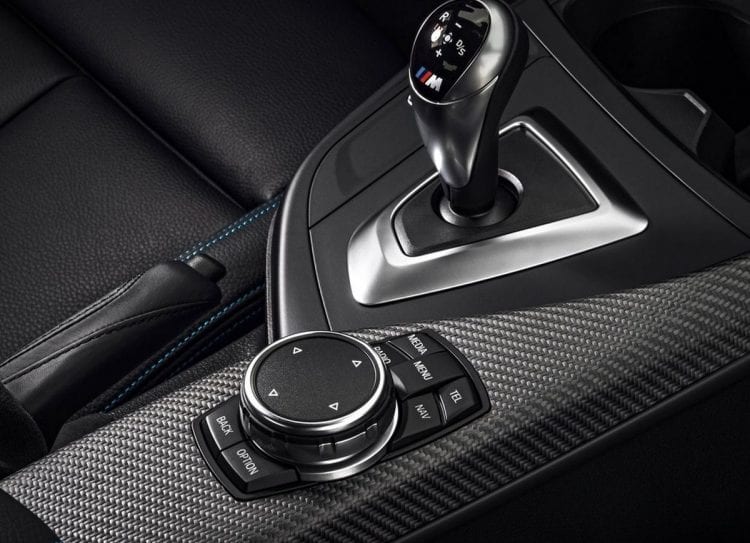 Undoubtedly, the heart of any BMW is its engine, and M2 was not designed to disappoint us in this sense for sure. The model is equipped with the 3.0-liter turbocharged and intercooler DOHC 24-valve V6, with direct fuel injection and aluminum block and head. This unit is capable of delivering respectable 365 hp which is a really good figure for a vehicle that weighs at about 3,450 lbs. Its six-speed dual clutch manual transmission slides into gears perfectly and remarkably match engines downshifts and revs. Together, this powertrain is capable of providing pretty impressive performance. For example, it allows M2 to reach 60 miles per hour in just 4.2 seconds and 150 mph in 27.0 seconds. The top speed of the vehicle was 164 miles per hour, but this indicator was certainly limited. 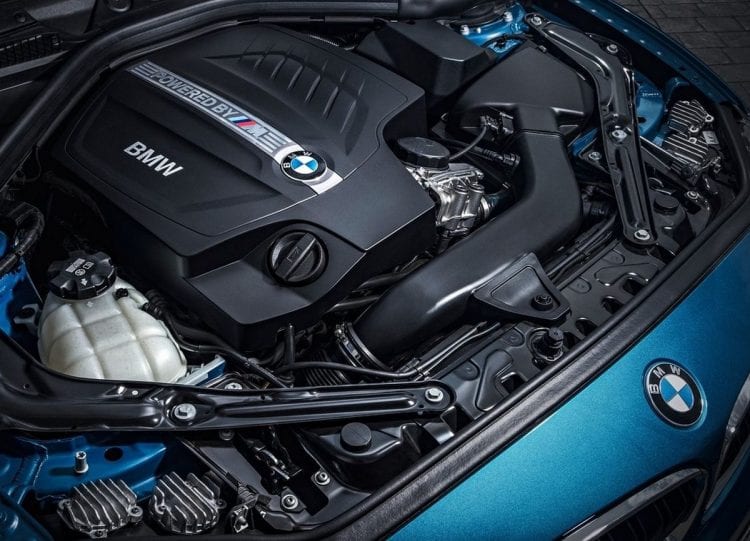 According to the EPA, the M2’s fuel economy at 21 mpg combined was 18/26 city/highway for the manual transmission. Slightly better is the automatic double clutch transmission with a manual mode that returns 20/27 mpg but as usual with this kind of cars, it is not the most important aspect. 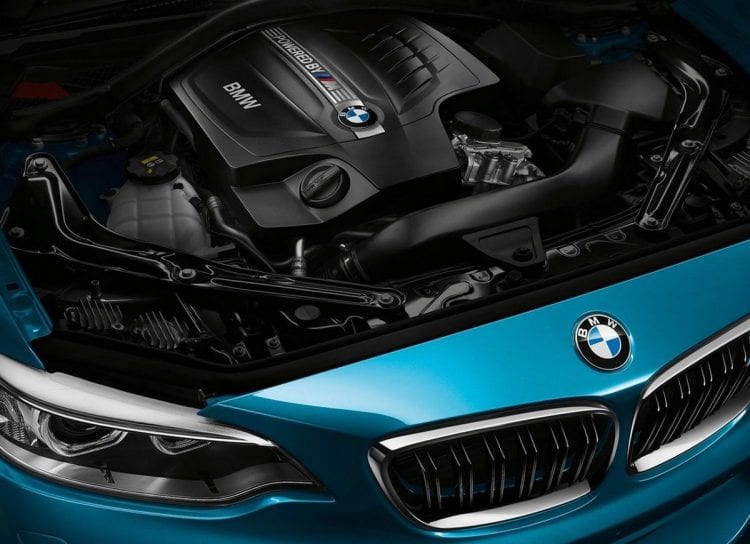 Naturally, M2 possess a payload of security features that keep the driver and passenger safe on such high speeds. Specifically, among the standard additions are traction and stability control, full-length side curtain airbags, side airbags, and antilock brakes. The company is ready to offer some additional and very important features, such as automatic braking, frontal collision warning, rearview camera, and parking sensors.

Although we cannot fully analyze the safety of M2 because of lack of crash tests results, the Insurance Institute for Highway Safety has claimed that the model has performed well on frontal and side impacts and received the highest score of “Good.”

The price of 2016 BMW M2 will start from $51,700, excluding handling and destination fees, which makes it fairly affordable entry-level luxury vehicle that is performance oriented. The segment is pretty competitive, given that M2 has Mercedes-Benz CLA45 AMG, Porsche Cayman GT4, and Audi S3 as the main opponents. The sales volumes are not known yet, but the deliveries had already begun last month. 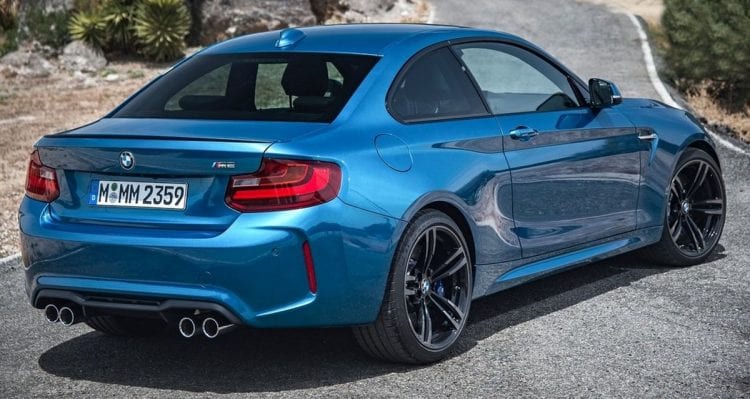 M2 has everything to make it a proper successor to the 1 Series M and legendary models of the 1980s. Given that it had been highly expected, the reputation of the German manufacturer in the entry-level luxury cars will depend on the performance of this vehicle. If you need more figures to characterize the M2, the official BMW website claimed that this model has completed the Nurburgring Nordschleife in just 7:58 minutes, which is faster than the previous generation version and even Alfa Romeo 4C. It is fair to suggest that M2 is an M235i on steroids and has the potential to be a truly driver’s car, where everything is performance and driver-oriented. Plus, it has a relatively lower price when compared to M4, which has similar characteristics and performance.