Audi’s smallest crossover is the Q3 that debuted in 2012. It’s based on the VW Tiguan, and originally, it was delivered with three TFSI petrol engines and the same amount of TDI diesel engines. For 2016 Audi is bringing back the Q3 stateside, although it will only come with the flagship 2.0 TFSI four-cylinder petrol unit developing 200 hp. There’s an all-wheel drive system in play as well but more on that later. For now, you need to know what’s new.

The 2016 Q3 receives revised exterior styling (more precisely front fascia has been upgraded), with sportier lines and a more aggressive face. There are Active suspension dampers and driver-selectable modes that will adjust comfort level by changing settings of suspension. Sadly, the U.S. won’t get the RS Q3, a monstrous crossover with a 2.5-liter five-cylinder turbocharged unit that produces 340 hp and 332 lb-ft of torque.

The Q3 is Audi’s direct competitor to the X1 and the GLA-Class, and although most of these have their unique character and feel, when you compare stats and practicality, the Q3 wins hands down. Continue reading to find out more about the Q3 in detail. 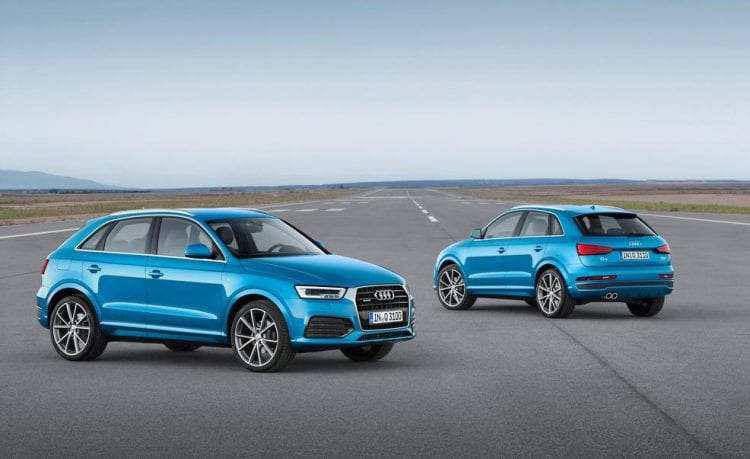 Like we said, the exterior has been changed but not that much, something we are used to seeing from Audi and other big players. The majority of the upgrades are at the front end only. The front grille is more aggressive, and it now has a chrome ring connecting both of the headlights. The five-sided lower air intakes sit just below the headlights and are visually more striking and aggressive. They give off this menacing look, much more than the previous cars.

The old version was a handsome looking thing, but the 2016 car takes the looks department to a whole new level. It’s the same, but there’s a lot more of it. You don’t get a big difference as you do when there’s a new generation. Here we get little things, but the little things add up. This is still easily recognizable as a Q3, but it looks sharper and fresher than ever. At the back, you’ll find sequential taillights which are a nice touch. 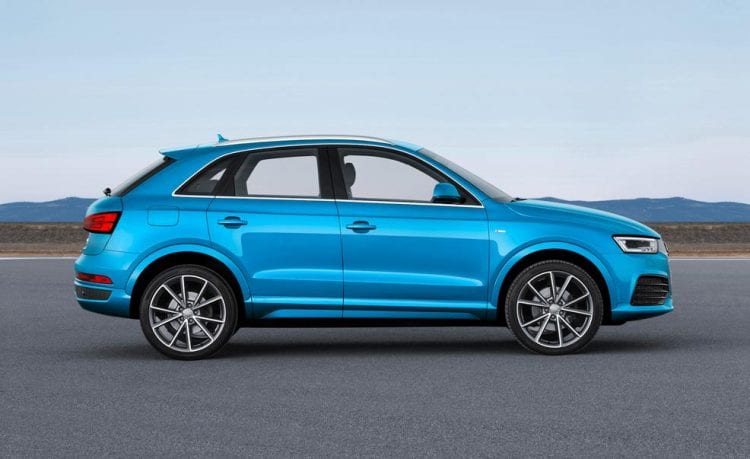 The lower segment of fascia is even sportier and has more detail. There are also new wheels to differentiate the 2016 Q3 from last year’s Q3 as well. All in all, it’s a very well packaged crossover.

Styling is an individual matter, but no matter whom you ask, the Q3 doesn’t disappoint. The X1 seems to be a hit or miss, with some people liking it and others despising it. The CLA is much closer to the Q3 in that regard. It too has a very modern look, with an aggressive appearance but it’s nowhere near as menacing as the Audi. 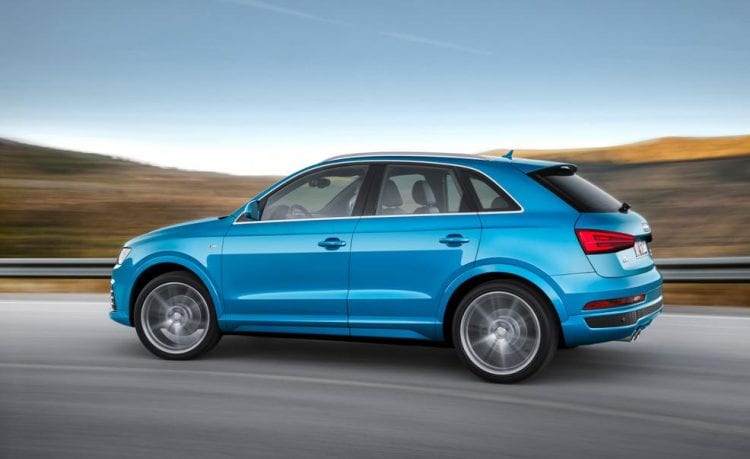 In typical Audi fashion, the Q3 manages to be stylish yet evil looking, something the others can’t pull off. The CLA has a much more dignified look, it seems more up-class. The X1 now feels outdated, and honestly, it appears like it’s another generation behind the two competitors. If BMW were to update it, we would be seeing a much closer fight between the three German manufacturers. We sincerely hope we get to see that in the future.

The interior is typical Audi. If you thought the exterior was standard Audi, wait until you get inside of the Q3. It’s about as Audi-like as a car can get. Don’t get us wrong that’s not to say that it’s bad. In fact, it’s anything but that. The materials are extremely high-quality, despite this being the smallest crossover of the bunch. The fit and finish are just amazing; it is second to none. You can just tell that this thing is built to last, there’s no question of whether it will withstand the test of time. 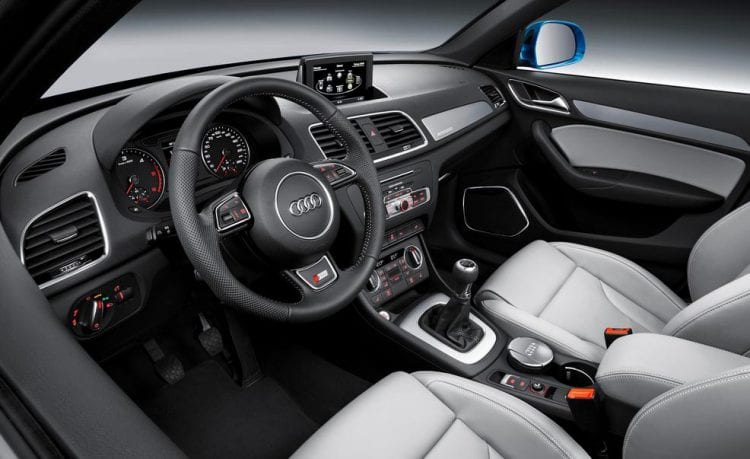 The only thing that might wear is the leather, but that’s just from normal use, and we’re talking about years and years of driving. The buttons are ergonomically positioned and easy to use. Everything is exactly where you would expect it to be, and it’s the right shape. The buttons make the right noises when clicked and really, there’s almost nothing to dislike about this.

If we do have a complaint, it would be about Audi’s excellent MMI system. Yes, we did say excellent but at times it can get a bit slow and uncooperative. That happens so rarely that it’s not an issue, however. The flip-up screen positioned in the dashboard is good, and the center controller for it is right below on the center console. 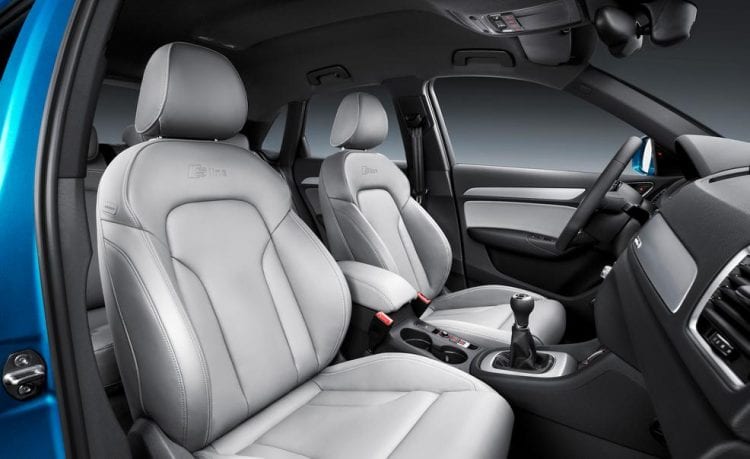 The dual analog gauges present you engine speeds as well as movement speeds, with the information screen giving you the rest of the vital information such as the trip meter, mpg reading, mileage and so on. Passenger comfort is key in the Q3 and the engineers haven’t saved any money on delivering top level comfort. The front bucket seats are supportive and comfortable, not to mention power-adjustable. Even longer rides will be enjoyable.

Under the hood of the Q3, you can find lots of engines to choose from. There are a few TDIs as well as some TFSIs, but sadly, the U.S. only gets a 2.0-liter turbocharged four-cylinder with 200 hp and 207 lb-ft of torque. The engine is mated to a six-speed auto, and it sends power to the front wheels in standard guise. You can opt for a Quattro all-wheel drive system which should come in handy, especially in the winter.

If you’re having second doubts, just go for it. It’s useful even in everyday conditions. 200 horsepower are too much for the front wheels to handle alone, and the Quattro helps. When power is transferred to front wheels, this crossover will return 20/29 mpg while the Quattro drops highway number by one point ultimately returning 20/28 mpg city/highway.

There’s no diesel on offer, nor is there the hot RS Q3 (if it’s happening). Audi said they plan to bring out an RS version of each car they make, and if the RS Q3 does get built, we suspect it will have a 2.5-liter five-cylinder turbocharged unit developing 340 hp and 322 lb-ft of torque. Talk about power in a crossover.

The basic Audi Q3 starts at $33,700 and prices go up from there. U.S. customers can only increase the price with options while European ones can do that with different engine choices. If you want AWD system added here, know that it will cost you additional $2,100.