Recent years saw Aston Martin in some serious financial troubles. The company faced issues with bankruptcy multiple times, and there have been speculations on whether an Italian company will pull it out of the mud or not. Well, while there haven’t been any new news regarding that, Aston Martin has other plans on how to get out of the troubles they’re facing.

At the 2015 Geneva Motor Show, a creation dubbed the “Vulcan” saw the light of day, being presented to the entire world. It turned out that it was only a track-focused creature, capable of competing with the likes of the FXX K or the P1 GTR, but what a glorious car it is. Lots of people expected Aston to bring in a beefed up Vantage or even a Vanquish, but wow did Aston shock us all. Not only is the Vulcan brand-new, but comes with a unique racing program that only Ferrari has been able to deliver up to this point.

The exterior of the Vulcan is a tribute to some traditional Aston Martin styling features, blended in with some fresh and unique ones. Therefore, you can look at it as a celebration of Aston Martin’s past, but also, a glimpse into their future, a showcase where the brand intends to go with their subsequent models and design philosophy. If ever there was a great time to be alive in the car world, it’s now, with the likes of Vulcan and the FXX being spawned right in front of our very own eyes.

Because it’s a track-only vehicle, it’s small wonder that most of the design have been influenced by the Vantage racecars family. We say influenced because that’s really as far as things go. The Vulcan is largely different to anything we’ve been used to so far. The nose, for instance, is a big deviation from the things we’re accustomed to receiving from this supercar maker. The headlights and the grille are both located lower in the front fascia, for a meaner and more aggressive look.

The grille is no longer just embedded in the front but is now more like its own entity. It’s been engraved in a separate piece in the front fascia, made completely out of bare carbon-fiber which also houses the side canards and the front splitter. The LED headlights have been slimmed out, appearing a lot thinner compared to those on the Vantage for instance. The vented hood is wider and more distinct than those on any other car too.

There are reshaped fenders and side skirts on the car, retaining the standard Aston Martin ventilation we’ve come to known. The rear is brand new, but you can immediately tell that things like the taillights, the giant wing, and the side vents have been inspired by the Vantage GT3 and the GTE models. The rest of the rear elements such as the rear diffuser are developed specially for the Vulcan.

Most changes and design differences between this and other models in Aston Martin lineup are visible when you take a look at the side, the profile. The rear haunches are very muscular and upright, the low rear end is like something straight up from a GT3 car, and the front scoops are down so much that the headlights are nearly touching the ground (at least it appears that way). The side mirrors are obviously race-spec, and there are carbon-fiber side skirts. Oh, did we mention the exhaust exits at the sides? Well, we do now, and it looks mighty impressive.

The interior is extremely radical. Not just compared to a Vantage GT3, but to any other Aston Martin every built. Almost every surface has been crafted from carbon-fiber. The seats, steering wheel, dashboard, and instrument cluster all appear to be lifted straight from some exclusive racing series and are ready to hit the track at any given time. There are obviously bucket seats, but they’ve been covered in Alcantara. The steering wheel is filled with various buttons and switches, but it’s much simpler than an F1’s. 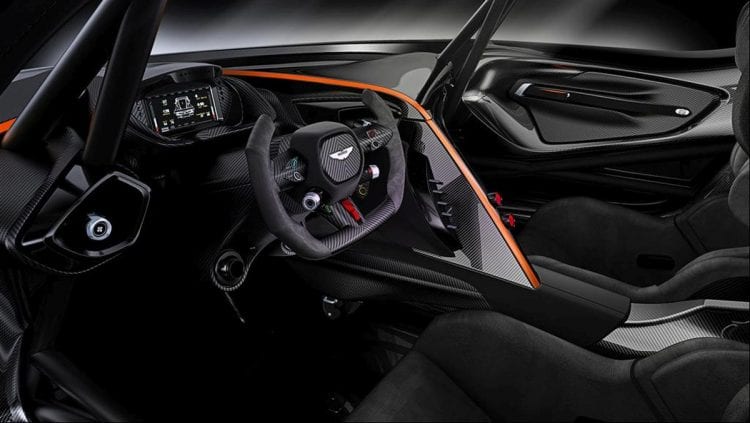 You can’t have a racecar without a roll cage, so logically the Vulcan comes with one too. The mostly black and carbon-fiber cockpit is only separated with an orange stripe in the center console, and some red buttons and switches for the most important bits in the car. You can find the same orange accessories on the door panel of the driver door. The large cluster just behind the steering wheel offers all of the information you might need in a race: speed, rpm, oil pressure, tire pressure, lap time, fuel consumption and so on.

It may be unique and crazy looking all-around, but the engine is this car’s crown jewel. The standard 5.9-liter V12 has been bored and stroked to 7.0 liters. This results in a power figure somewhere north of 800 horsepower, but Aston Martin won’t disclose how much exactly. And anyway, who even cares the exact power figure when you’re playing with more than 800 horsepower. A new, modern Formula 1 car doesn’t even output that much power. It really is ridiculous, but then again, it has to be if it wants to compete with the P1 and FXX supercars.

Performance should be blistering. It’s expected to reach 60 miles per hour in less than 3 seconds and go on to a top speed in excess of the 200 mph mark. The company says it would go faster but all of that aero is keeping it firmly on the track, slowing the top speed by a significant margin. We suspect no one will even drive it to its full top-speed as is, but it’s nice to know that the removal of that giant wing will yield in a few more mph but have in mind that you need huge amounts of downforce to control all that power.

That massive engine is mated to a mid-mounted six-speed Xtrac sequential transmission, controlled via paddles behind the steering wheel. There’s the usual stuff such as a limited-slip differential and a magnesium torque tube in the carbon-fiber driveshaft which keeps the weight under control while providing insane amounts of strength.

The Vulcan will only be produced in 24 units, so it will naturally become a collector’s car. It’s difficult to say how much it costs, but we’ll be really surprised if it isn’t more than $2 million. Recently we could see one model offered for $2.3 million which gets it to the company of the most expensive cars ever.