Just when we thought Alfa Romeo was at the edge of extinction, they surprised us with the awesome little Mito. So everyone thought okay, they made a great little car, but they’re never going to get back to the big boy stuff. Sure there was the 8C, but it was a limited production run, only available to a handful of people. Well, at the 2014 Geneva Motor Show Alfa Romeo did it again with the staggering 4C.

For 2016, Alfa decided to freshen up the range as well slightly and to introduce the 4C convertible, for those looking for an open-top thrill in a small, nimble chassis. This review will only cover the coupe, although the convertible will obviously most likely get the same treatment, with one vital difference being the removable roof.

In an already super lightweight vehicle, any addition will make a big impact, so it’s only natural when introducing a new trim option to make it out of carbon-fiber, which is exactly what Alfa has done. The standard audio system of the 4C has been upgraded for more power and clearness, and there’s an all-new dual-mode exhaust which is an extra option. It may not be much, but constant little improvements like this iron out the cars’ flaws every year adding up to make a big difference in the end.

As we mentioned, there are two body styles available with the 4C. The coupe we’re talking about in this article and a convertible one. The standard equipment on the coupe includes 17-inch wheels on the front and 18-inch ones for the rear. As for the tires, we are getting summer performance tires since Alfa deducted that you’ll mostly be using the 4C during the summer, although you can change them for all-seasons or even winter ones if you’re brave enough.

At the front, there’s LED running lights with thankfully, the headlights we saw on the original concept and not the ugly aftermarket looking ones that went into serial production. The taillights feature LED technology too, completing the overall look of the car. Elsewhere, you’ll find heated mirrors and for the convertible, a manually operated soft-top. Making it electric would have taken up a lot of room, time, and weight, not to mention the price increase. This way you get the retro feel while more importantly, they did not increase the weight more than it is needed.

We know it’s been said a million times, but wow, this car is gorgeous. There’s no angle in which it looks even remotely mediocre, let alone ugly. It’s hard to describe the styling. It’s modern Alfa design, incorporating stuff from the 8C but also some new elements not seen on anything else. The whole thing is just so simple and elegant, and yet it’s aggressive and striking. If this drove past you on the street, you would turn at least twice to get a better look at it. If you are among those lucky people that will buy it and drive it you can be sure that it will stick out on every parking lot or anywhere you go.

The small headlights at the front compliment the overall proportions of the car, as do the rear round ones. Nothing over the top here, everything perfectly blends into a truly beautiful sports car. The front grille is a traditional upside-down triangle, something nearly all Alfas of old had, and the dual openings on the lower front bumper are there for practical purposes as much as they are for visual. The sides feature small scoops, and they too are functional and not just a cosmetic addition. The overall impression of the car is completed at the back with the dual exhausts, one on each side.

Depending on the type of person you are and what you’re expecting from the 4C, you’ll either love or hate the interior. One thing’s for sure, you’ll immediately agree that there’s almost nothing like it. The most similar car to the 4C in terms of the interior would probably be a Lotus and an Exige of all things.

The passenger compartment, for instance, is very cramped, and it’s mostly bare carbon-fiber. Not because they couldn’t paint it, but because it just looks awesome. You can tell it’s been race inspired by other elements too, such as the harsh minimally padded seats or the aluminum pedals bolted to the floor, rather than hanging from the upper part.

We said you’ll love it or hate not because it’s small; that much you can tell from the outside, but also because it’s pretty devoid of any creature comforts. We’re not talking navigation systems or Satellite radio; forget that stuff, that’s rocket science to the 4C. Here you have a car that doesn’t offer armrests, a glovebox, useless cup holders, no storage at all… the list goes on and on. The seats don’t even recline. But, it’s all for a greater purpose.

And that purpose, are the dynamic capabilities of the 4C. Under the hood, you’ll find a 1.75-liter four-cylinder engine developing 237 horsepower and 258 pound-feet of torque thanks to a significant turbocharger that has been added. Power is naturally sent to the rear wheels via a semi-auto transmission. The steering wheel has paddles for shifting gears, although the car can do it for you as well. There are four modes to choose from, and an electronic limited-slip diff is standard.

The 4C fitted with the Track Pack managed to complete the 0 to 60 miles per hour sprint in just 4.2 seconds using its built-in launch control. Compare that number to some much more powerful cars, and you’ll see it ties the Corvette while beating the Cayman and the M4. Not that anyone cares that much, but the 4C managed to return impressive 28 mpg on a combined run. Cars of similar performances can only dream about. 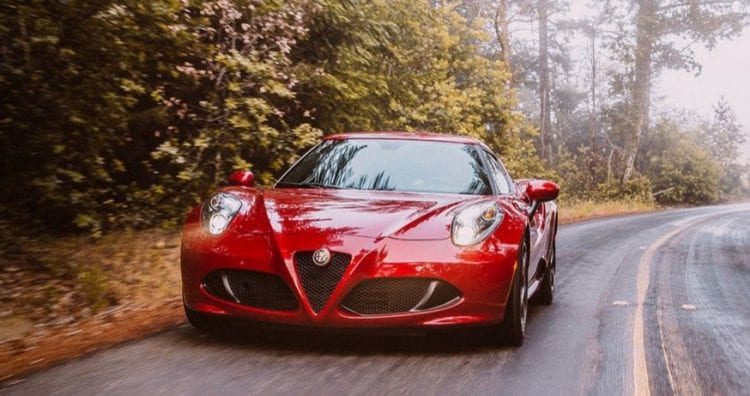 Finally, we get to this car’s party piece, its handling characteristics. The best way to describe it is to say it’s basically a go-kart for the road. The steering wheel is unassisted, but it’s precise and immediate. The ride is harsh when compared to most other vehicles, but it corners like it is on rails.

There’s noticeable turbo lag, but it works with you rather than against you. The engine is a screamer, enjoyable in the canyons but a nuisance on the highway. The transmission is fast, but can be a bit dim-witted at times. All these things we mentioned previously are what you can expect to get from a true sports car, and 4C doesn’t disappoint here.

To sum the Alfa Romeo 4C up, it’s about as lively as a car experience can get. If you’re looking for one of the best driver’s cars, look no further. Prices start at $56,000 and if you have that kind of money, don’t even think twice.