The Toyota Tundra received a major upgrade in 2014. It was the much-needed facelift everyone was waiting for. It finally gave the Tundra some new features and elements which it lacked. No longer was it at the back of the pack, it was now proudly at the front. In most cases after such a large facelift, the manufacturer decides to leave the vehicle unchanged for at least a year or two. This isn’t just because they can’t be bothered to change it again, but since they want the model to actually get used to the point that they get some data from that. That way they can receive valuable feedback on what they need to change for the upcoming facelift.

Well rather untypical to Toyota, they decided to update the Tundra for 2015 yet again. The base V6 engine has been dropped from the entire range, leaving just the V8 options for all trims. In addition to that, they’ve also added the off-road TRD Pro trim version to the lineup. Its party trick is the integrated trailer brake controller. Now we don’t want to speculate saying Toyota updated the truck since it still needed updates but even after testing the 2015 model we felt it still lacked something. Something that its competitors have. 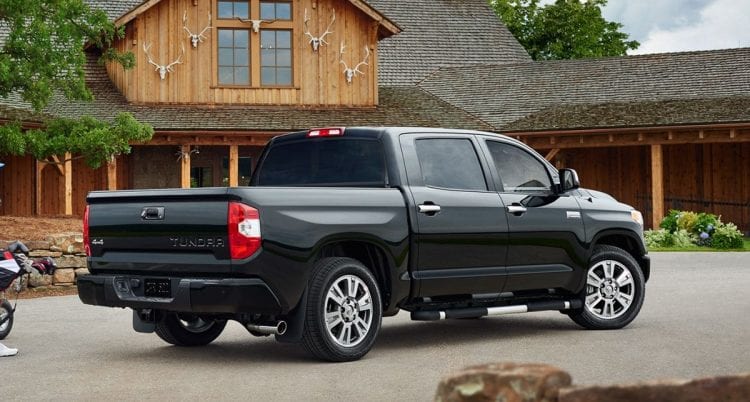 Now obviously the Tundra is still a mighty capable truck, there’s no denying that. But it doesn’t seem to excel at anything in particular. Sure it’ll go in lots of places where you think it might not and the fact that the starting engine is a V8 means you can now get it even in the base model but despite all that, we can’t say it’s the best. It might have been, but the competition at the moment is so fierce it’s really difficult to shine. It’s a tough crowd, and one the Tundra can’t keep up with.

The Tundra remains a full-size pickup available in three body styles: the standard regular cab with two doors, a four-door extended cab dubbed the double cab and a four-door crew cab titled the CrewMax. You can mix the three body styles with two wheelbase options and three bed length options. The shortest bed is 5.5 foot, the middle one is 6.5 foot (standard) and the long bed measures in at 8.1 foot. A double cab can seat five or six people as can the CrewMax, but again it all depends on how you specify them.

As far as trim levels go, you can choose from 6: SR, SR5, Limited, Platinum, 1794 Edition and TRD Pro. Obviously, the trim levels get more luxurious and capable as you go up the latter but also more expensive. We’d recommend skipping the base model or the SR5 if you can simply because the Limited or 1794 offer the most bang for your buck, but if you can’t afford them the base model will serve you just fine. Don’t expect a great deal of luxury, however. 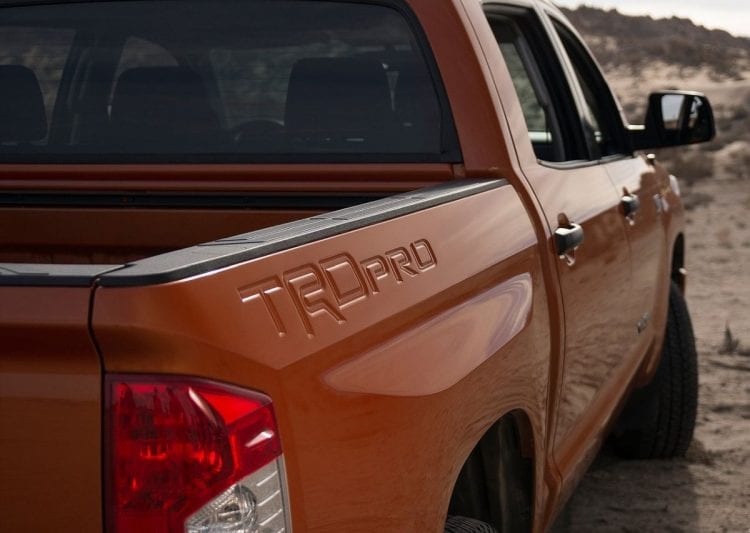 If you want to take your truck off-road or are planning to do that on the regular, make sure you go for the flagship TRD Pro. Yes, the other versions can do it too but just like everything, they are more prone to break since they weren’t built as a pure off-roader in mind. The TRD’s skid plate, 2-inch ride height increase, and Bilstein shocks all mean that it’s way more capable off-road than the standard Tundra. Just keep that in mind if you’re planning to off-road your Tundra regularly.

Surprisingly the interior isn’t half bad. We’ve had lots of issues with old Toyota trucks due to how utilitarian and raw they were but that’s not the case with the new Tundra. It’s a nice place to be. The controls are cleverly laid out and all of the buttons are ergonomically placed. Everything is where you think it would be and it’s definitely a functional interior if not a stylish one. 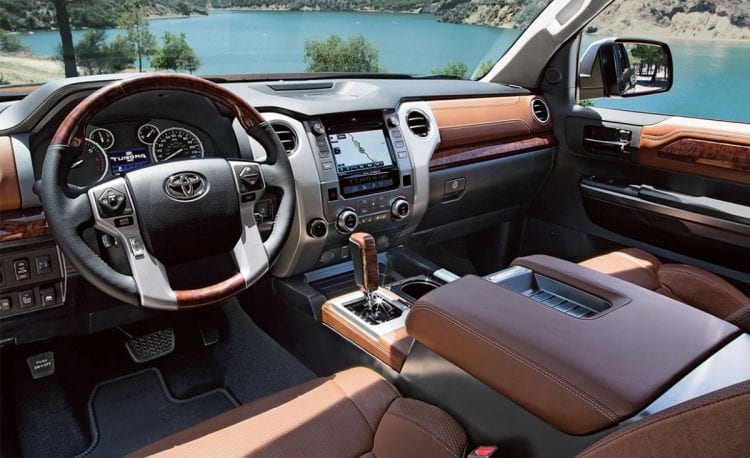 Once again, the materials proved to be up to the job. They’re not the greatest but they get the job done. It’s acceptable, especially considering the truck’s intended role and purpose. The CrewMax offers a lot of space for the passengers, including both legroom and headroom. There’s almost no lateral support in the seats in any of the trims but don’t let that cause you concern. They’re more than fine for just cruising around.

Like we said the V6 engine has been dropped and that leaves us with just the two V8s. Both of them send power to the rear wheels in standard guise but you can, of course, opt for an all-wheel drive system which will naturally send power to all four wheels.

The Limited, Platinum, 1794 and TRD Pro all get a 5.7 liter V8 as standard (it’s optional on the above-mentioned models). It develops 381 horsepower and 401 pound-feet of torque. Again it’s mated to a six-speed auto transmission. The fuel economy is even worse, however. It manages to return just 15 mpg in rear-wheel drive guise (13/18 for city/highway) and 15 mph for four-wheel drive variants. You do get a standard tow package on all Tundras with the 5.7-liter engine but it’s honestly not enough to offset the poor fuel consumption. The 10,500 maximum towing capacity does help but it’s still a big trade-off. A 4WD 5.7 liter Tundra can reach 60 mph in 6.8 seconds. Seriously quick times for such a large truck.

If you like 2015 Toyota Tundra, we suggest you go for it. Despite all the criticism, it’s still a great truck. What’s more, it’s a Toyota, you can be certain it’ll probably outlast you and the customer service will be great. Prices start at $28,500 for the base model.

Check out 2017 Toyota Tundra as well.