Hybrids are gaining popularity more and more each year. It’s not just to save the planet by reducing exhaust gasses either. The fact that they’re really economical brings people who wouldn’t even consider them otherwise. We may not be at that stage where electric cars are the norm, but the current hybrids on offer sure do make a great proposition.
Amongst the usual array of small hybrids on offer such as the Prius, which doesn’t offer a lot of practicality, we have cars like the Accord Hybrid, managing to blend both those things in a single package more to the liking of lots of people. Before we get into the details, it’s worth mentioning that the 2015 Honda Accord Hybrid is a carryover from last year since nothing has been changed.

Well first of all, not only does it look exactly the same as the 2014 car but the Hybrid also looks the same as any other typical Accord. Apart from a few hybrid badges, there is no visual distinction to tell you whether an Accord is a hybrid one or not. That’s a good thing in our book. It’s discrete, understated and capable. The point of the hybrid isn’t to shout in everyone’s face about the good deed you’re doing, but rather to simply be pleased with yourself. 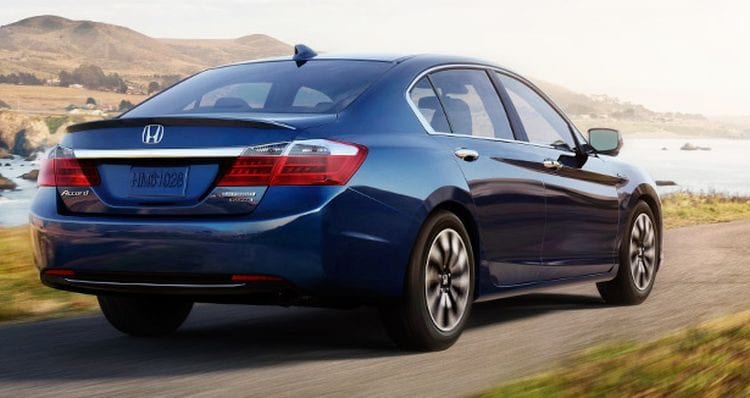 The Accord’s looks are understated anyway. It’s a good looking car but a bit boring if we’re honest. It’s uninspiring, as there aren’t any special design features or unique cues. The headlights, grille, taillights, virtually everything, resembles the same thing in the entire Honda range. It is okay, but some differentiation between the models besides the size and shape wouldn’t be amiss here. 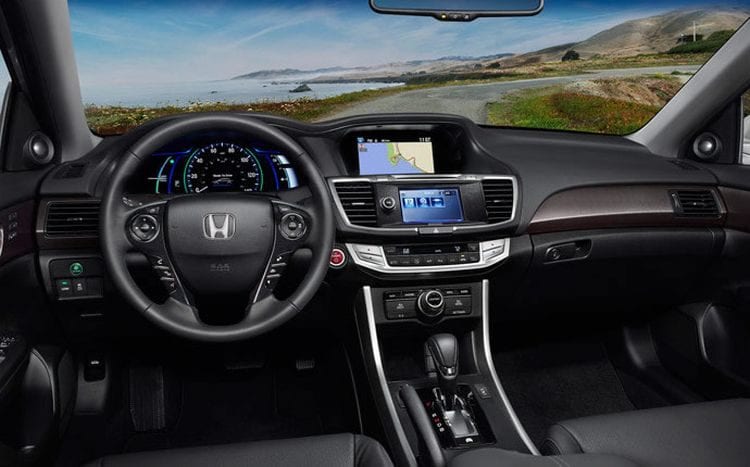 Then you enter the interior, and all is forgiven. The materials used to create the cabin are clearly high quality. You can tell this by touching them or even just looking at them. They feel soft where it matters and even where it doesn’t like the floor for instance. Fit and finish are great. You get the impression that the entire car was made to last for years and miles to come and that nothing would squeak or rattle after a few years down the road.
There are an 8-inch display at the very top of the dash housing all of the information’s and even the audio and navigation system interfaces should the Accord in question be equipped with them. The base version uses simple buttons for controlling the sound system, but the EX-L and Touring models have a touchscreen in addition to the display on the dash for controlling these systems. As good looking as it is, the touchscreen has some confusing menus and can be slow to respond at times which is a real shame. 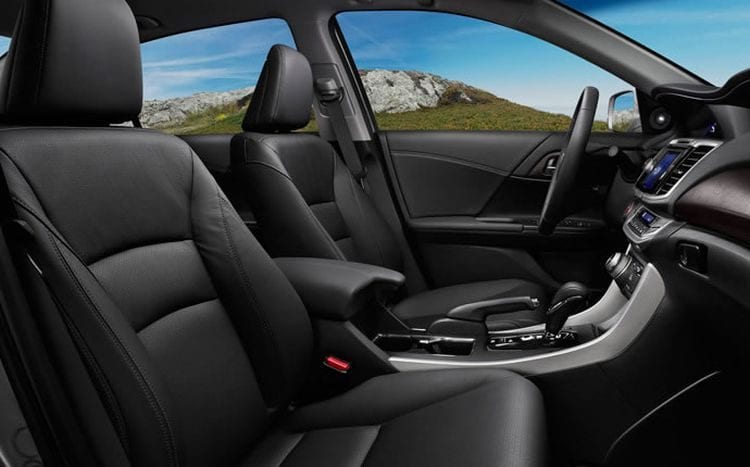 One thing the Accord as a model in the whole isn’t missing is legroom and headroom. There’s so much space in the cabin that everything else in the segment almost pales in comparison. The backseats are amongst the most comfortable and roomiest in class if not the best. The fronts are even better and have lots of adjustability and support even for taller or bigger people. You should have no trouble sitting five adults in the Accord with relative comfort making it ideal choice even for longer trips.
There are active noise-cancellation systems which keep tire and wind noise to a minimum. Because the beltline is low, outward visibility is excellent, and you get the feel of one quite roomy interior. The slim pillars and sheer glass surface on offer also contribute to this. In a world where restrictions are getting tighter each year due to safety reasons, having unprecedented visibility of your surroundings is a rare thing and one that we applaud Honda for achieving.

The other real downfall of the Accord Hybrid is a smaller trunk. It measures in at 12.7 cubic feet, but the way that it’s designed makes it less useful than that size would imply. If you don’t plan on carrying lots of stuff or even longer objects it’s more than adequate, otherwise the Camry and the Fusion offer more boot space.

Read about 2018 Honda Accord news! 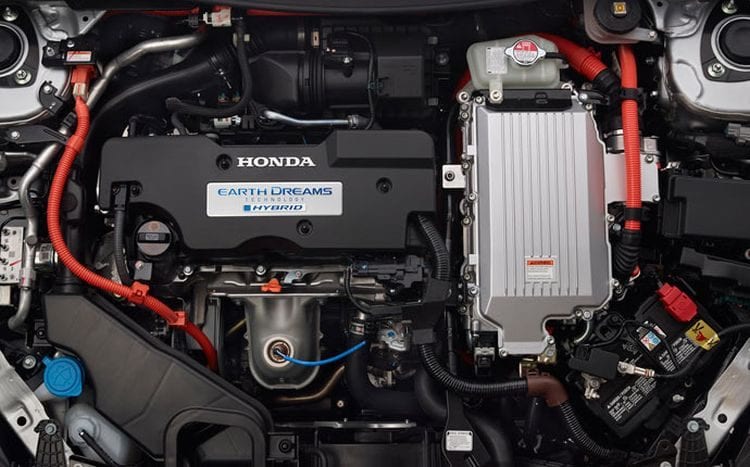 And now we get to the Accord Hybrid’s most important part, its drivetrain. The standard 2.0-liter four-cylinder engine is combined with an electric motor to develop a total of 196 hp. It’s sadly front-wheel drive only but so are most hybrids so we can’t complain there. Power is sent through a CVT, and the vehicle will manage a 0 to 60 miles per hour run in about 7.5 seconds. This result isn’t good just for a Hybrid, but it is decently fast full stop. Oh and the best thing: It returns 47 miles per gallon on the combined run.

Thanks to the electric motor the Accord Hybrid may be even faster than a V6 powered Accord off the line. Instantaneous torque proves to be a useful thing to have, and it will put a smile on your face every time you press the gas pedal. It’s so accelerative that we think it can even compare to some more powerful hybrids from luxury brands such as Lexus. All is good on the power front then, but there is a price to pay for that.
The noise of the engine can prove to be too much at times. It’s louder than most competitors, especially when you accelerating for overtaking or merging. There’s a good amount of drone at certain rpm’s and speeds but it isn’t unbearable and only happens sometimes.

The ride itself is very composed and compliant. It’s a perfect mix of stiff suspension for handling and soft damping for absorbing the bumps. The body roll is kept to a minimum despite the increased weight due to the addition of the batteries and the electric motor; it will prove to be a faithful companion even on twisty roads. The most surprising thing was the steering wheel which turned out to be not only precise but offered decent feedback too.

Overall we really like the 2015 Honda Accord Hybrid. Sure it might have some small nuisances but what car doesn’t really? If you want it, prices start at $29,300 for the base model and go up as you start adding more options and equipment.