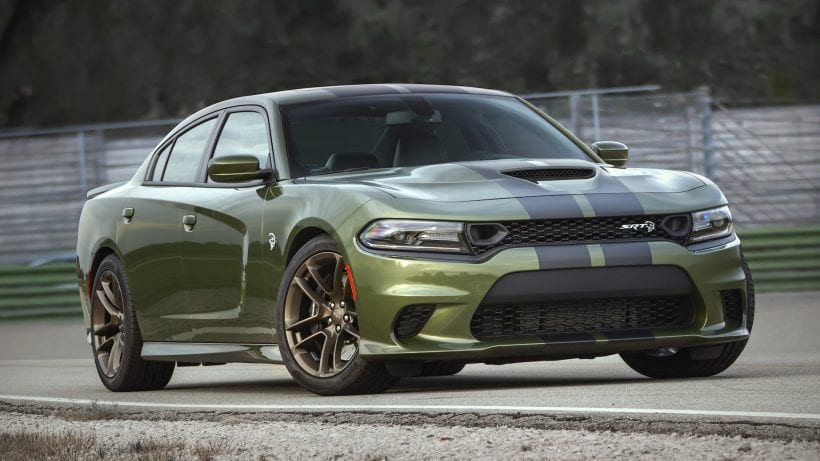 The Dodge Charger is a Detroit Icon, the original American muscle car. In the 1960s and 1970s, Chargers were kings of the road and a dream for many young men. Today, they aren’t as prevalent as they were, so it makes even less sense that some owners would decide to ruin their cars with these modifications.

Despite the name, this poor car won’t be contending for the prettiest car ever, because the owner decided to ruin it by the pink-and-purple paint scheme. As if that wasn’t enough, he decided to add chrome and pink wheels and ridiculous scissor doors. 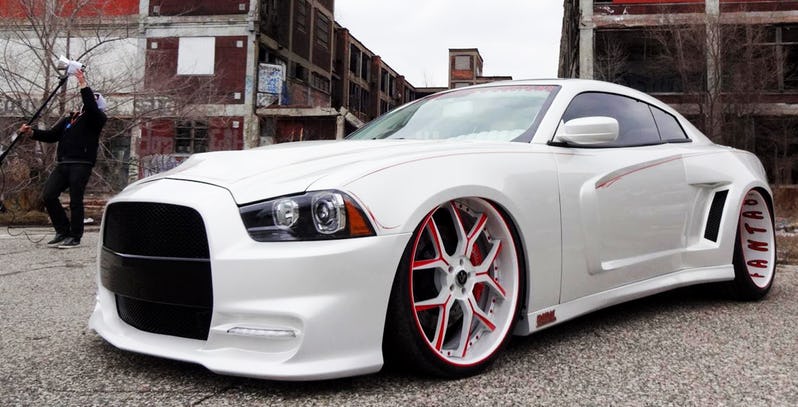 There is probably a rat rod manual somewhere that says each rat rod must display Confederate flag prominently and this one follows that rule. Apart from that detail, it also features a lift kit designed to wade through floods, which are a constant danger in the great state of Nevada, where this car is located. 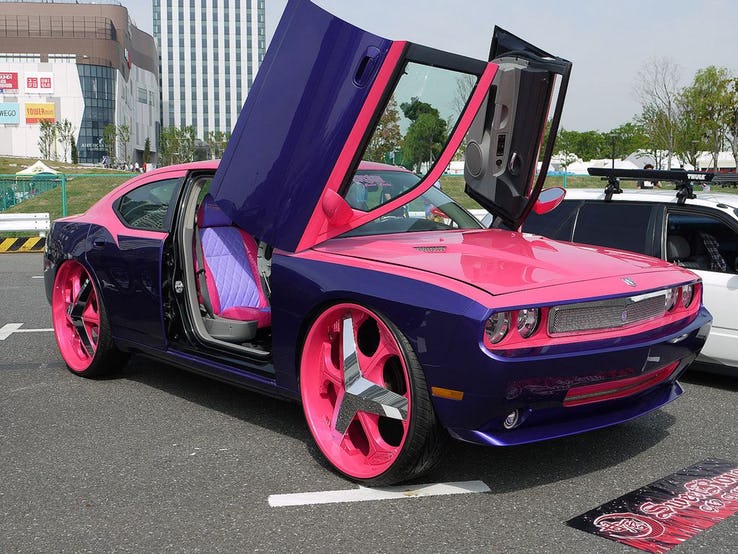 So, you have customized your Charger by adding monster wheels and a hilarious all-wheel drive. After thoroughly ruining the car, all you now need is a cool name. Why not name it Rubicon, because it reminds you of Jeep Wrangler Rubicon, the ultimate off-road vehicle? Or even better, if you need an off-road car, why not just buy one and leave that poor Charger alone? 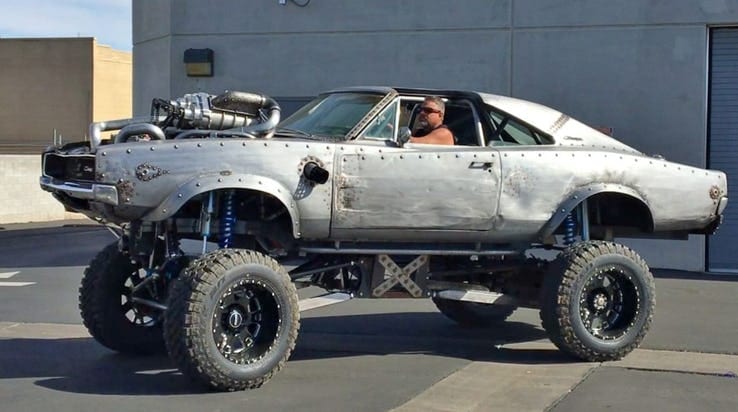 This one is just nasty. The idiotic paint job makes the car look like it was put together from two separate Chargers, one with rear end thrashed and the other with front end destroyed. Then someone cut them in half and put them together with a glue gun.

When the designers decided to change Charger from classic two-door coupe to a four-door sedan, there nearly was a revolution. Many fans considered it sacrilege and this one decided to do something about it, by transforming his Charger back to a coupe. The results are underwhelming at best. 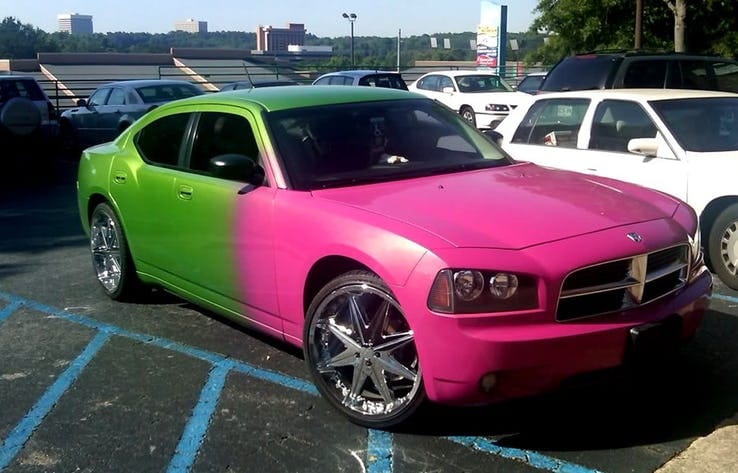 Designed by Stance Nation, this Charger demonstrates the best way to transform a thoroughbred sports car into a showroom queen, unable to move on vast majorities of the American streets and roads. The cheap plastic kit has virtually removed all clearance and now it scrapes the asphalt on even the smoothest surfaces. Forget about climbing over any obstacle, like a curb or even an angled drive in. 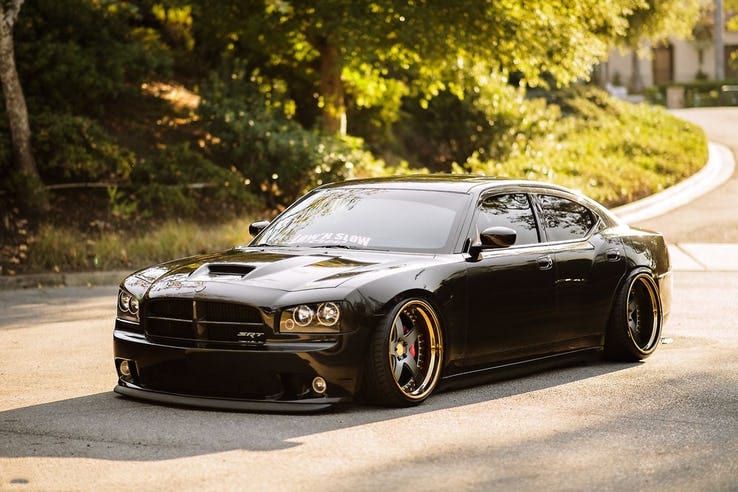 Based on iconic Mad Max’s Ford Interceptor, this Charger is ready to make an appearance in the next sequel of the franchise. If the original movie was set in Detroit, most of the cars in it would look like this. Most purist, however, can’t get over the fact that someone used a Ford as an inspiration to customize Charger. 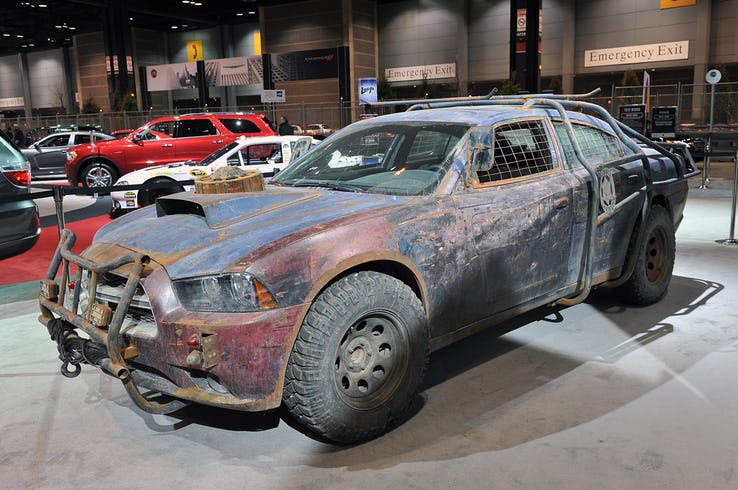 What’s worse than adding a pair of scissor doors to a Charger? Adding two pairs of them and that is something the author of this monstrosity did. Both front and rear doors are transformed into opening upwards, making this Charger look like a knock-off, Lamborghini. 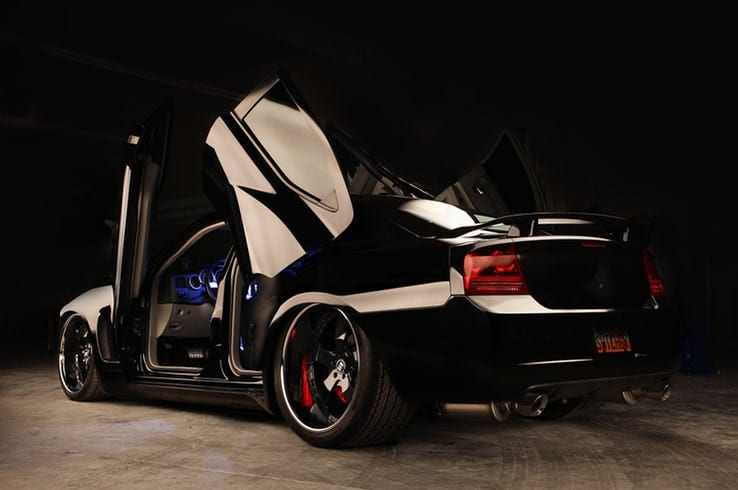 It seems as if the people who designed this Charger couldn’t make up their mind whether they want a Fast and Furious theme or Back to the Future one, so they did both. From the front, the car looks like something Dom would take to a quarter-mile race, but from the back, it only lacks Michael J. Fox in an orange vest. 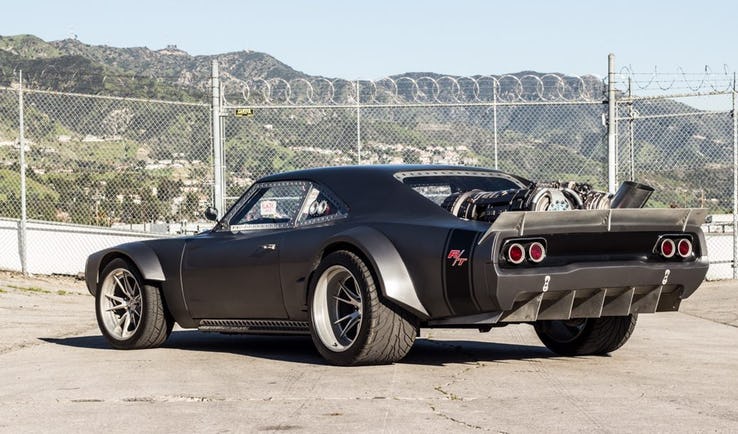 Scraping around the rink

Want to transform a Charger into a car that can do 20 miles per hour max? Just add these huge wheels and every time you exceed that speed limit, you will be reminded by the sound of tires scraping the wheel bays. 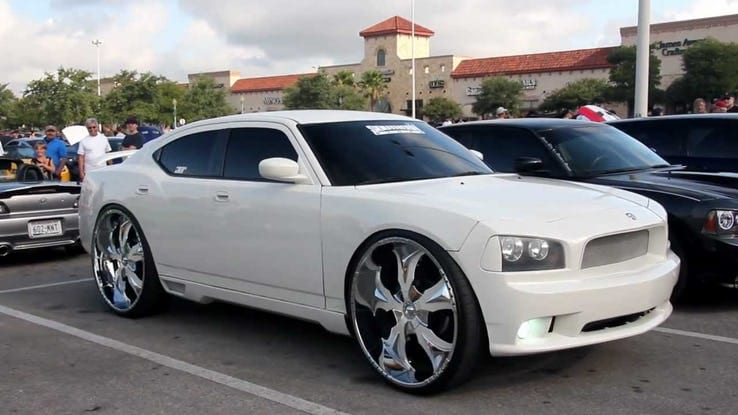 Not only the owner of this car ruined it by customization, he or she also added a row of stickers on the back window, informing everyone which parts did he uses in the process. If we happened to own one of the companies who is represented among those stickers, we would demand that he removes it, under the threat of suing. 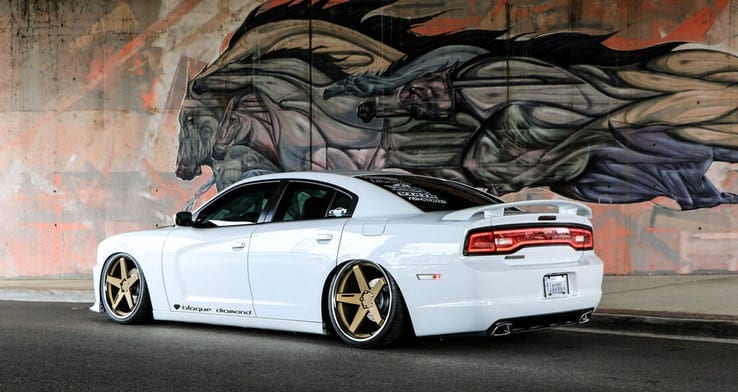 In general, making a modern Charger into General Lee from Dukes of Hazzard doesn’t seem like a terrible idea in your head, we will grant you that. But once executed, it is plain awful. New Chargers simply don’t the line that suits the paint job and just look like a bad copy. 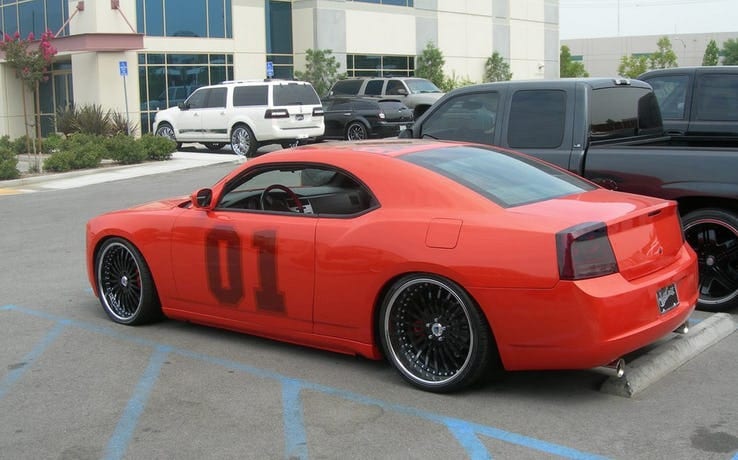 Another Charger ruined by ridiculous wheels. To make matters worse, the owner decided to mod the front end of the car to look like a Rolls Royse, which is just plain stupid. 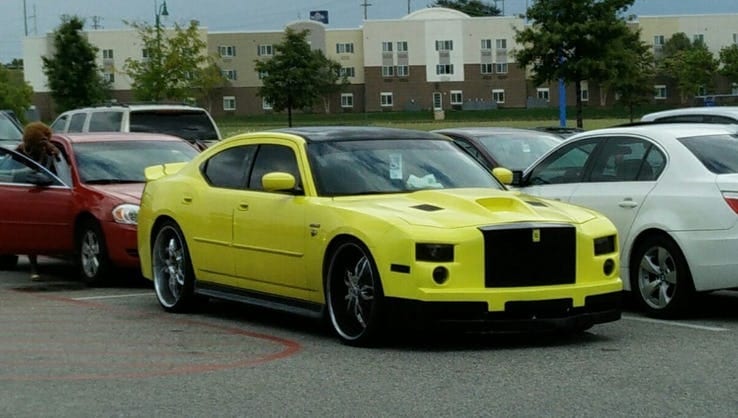 A mix between a classic Charger and an ice racer, this car is neither. The best way we can describe it is half-ruined. 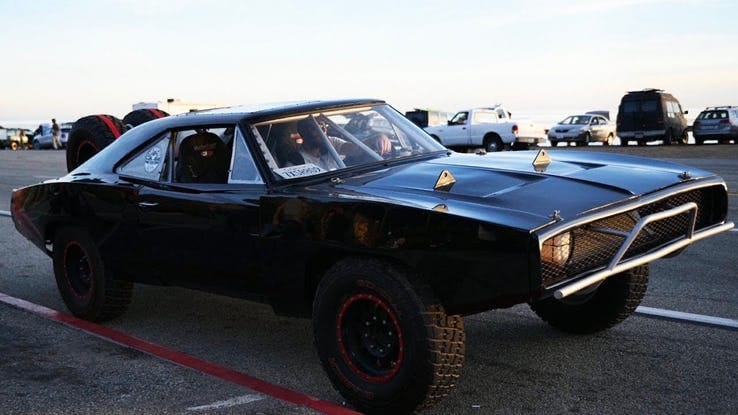 This one we just don’t understand. The owner painted the entire car black, which is OK, added nice black rims, also great, but then decided to add some blue details to the hood and roof. Why? Left all black, the car would have looked great. With blue additions, it just looked unfinished. 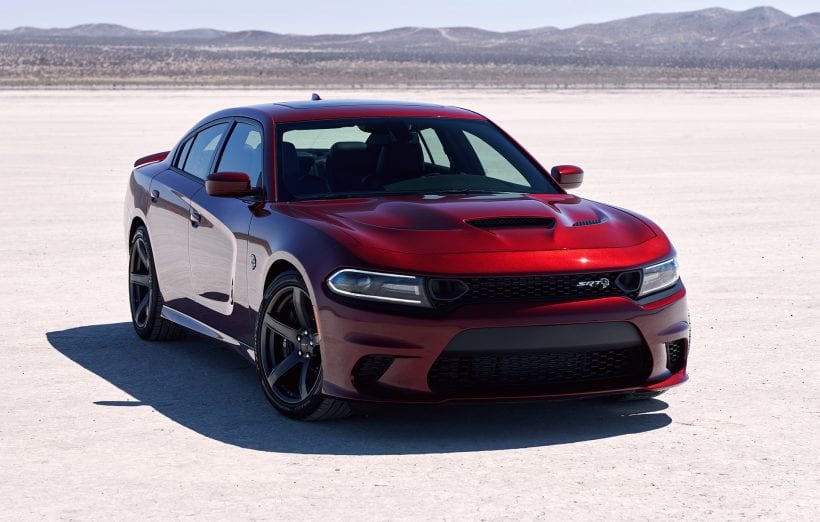