It is most often described as a three-wheeled bike, a vehicle which came out back in 2014 and immediately had an impact on people and both impressed and divided peoples’ opinion on it. The easiest way to describe it is that it’s a sports car with the feel of a motorcycle. Of course, a vehicle that was this popular was bound to have some incredible customs and we are here to provide a list of them. 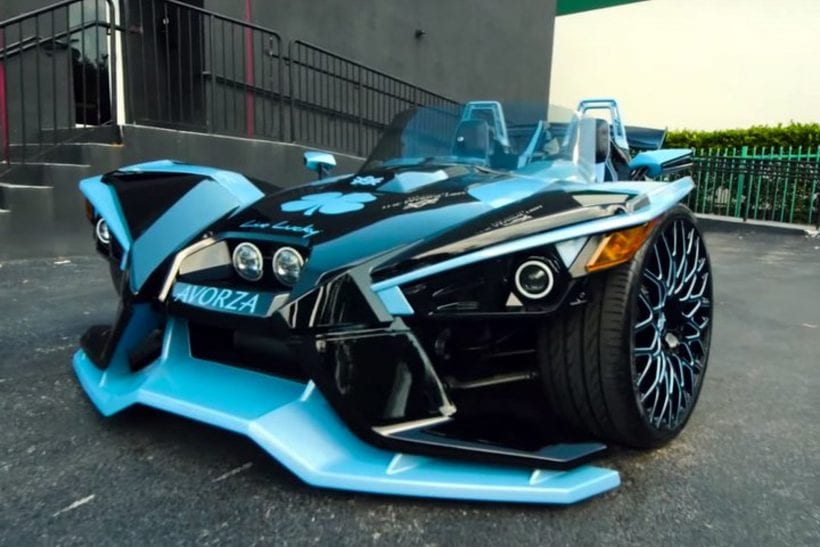 Auto Firm is located in Miami and it has made some incredible custom rides but things got really serious when the company received a request from New York Mets outfielder YoenisCaspedes to work on his Polaris Slingshot things got really serious. The vehicle took on a completely new look, it got improved aerodynamics, a completely new paint scheme which would normally be enough but they also gave the engine a serious tune, giving it a hydraulic suspension system, an Avorza sound system, full LED lighting package and to finish it a turbo kit. 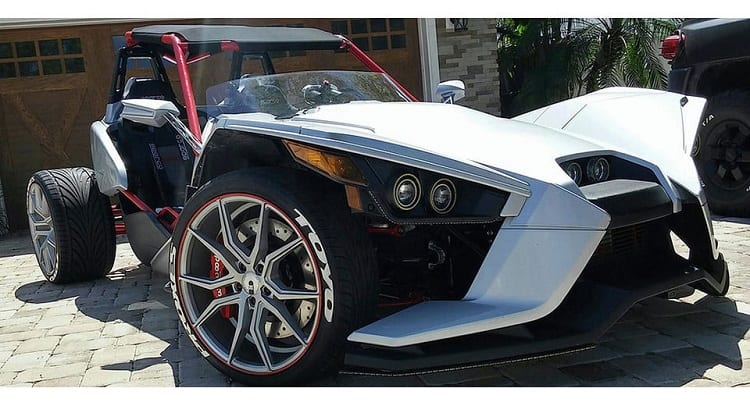 Speed & Design decided to change what makes Polaris special and gave it another wheel, and it might seem like sacrilege but it definitely brings it closer to modern supercars. The company managed to add wheel without any drilling, cutting or fabrication, it’s all made with bolts. The vehicle itself has a Push Rod/Rocker IRS suspension and a rear differential from Infinity, a drive system made by Speed & Design, Yamaha R1 shocks with piggyback reservoirs or the more upmarket Billet Hyperpro 461 shock option, and more billet aluminum parts that you could ever possibly imagine. 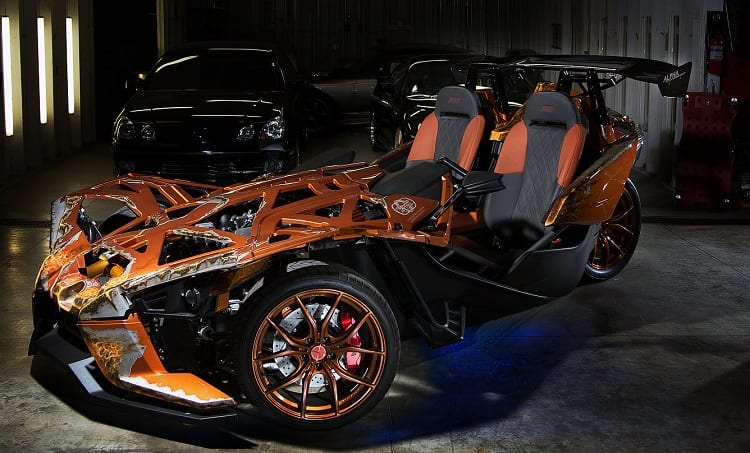 The Polaris already offers a great riding experience but I guess you could always use a tad bit more power, and that’s when you call Alpha Powersports, they took out the engine and put in a Chevrolet LS3 crate engine. The standard Slingshot engine is already a beast, with 2,400cc but this one is 6,200cc and gives you 430 hp. Other than that they added custom engine mounts, a custom bodywork, an automatic shifter system, a new automatic transmission, adjustable hydraulic ride height suspension and lots more 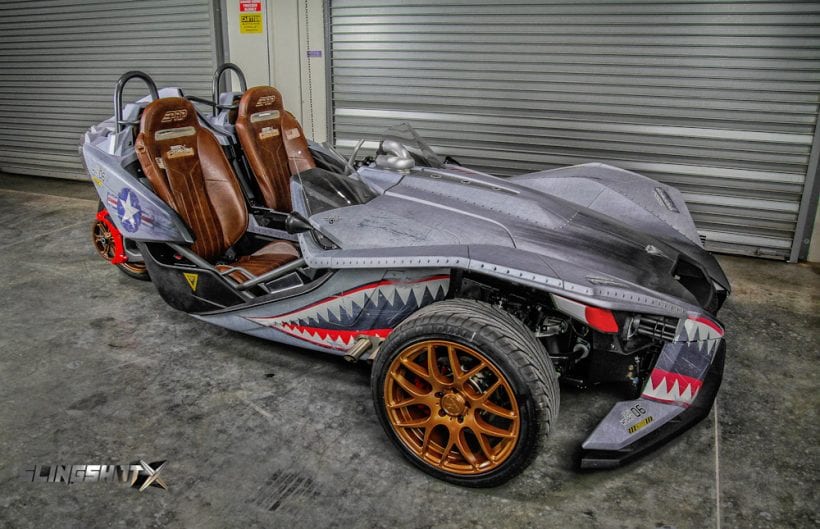 The SSV Works have outdone themselves here on all fronts and above all their other works. This Slingshot is called ‘Spitfire’s Revenge”. This one is actually specially commissioned by Pilaris themselves and it is inspired by the WW2 airplane. It looks amazing but of course, that’s not all, there’s a lot more under that incredible paint job. SSV Works is known for their top-notch audio systems so of course, they gave one to the Slingshot too, even if you don’t like three-wheeled vehicles you just have to respect the amount of work that went into this. 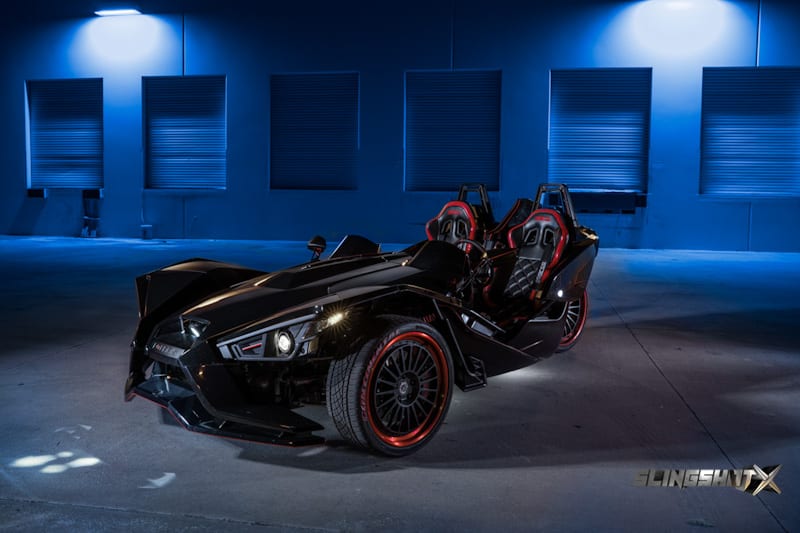 Daytona Bike Week had the honor of hosting this amazing custom build of the Slingshot since it was specially built for the event. The main feature of this custom build was to improve the performance which means the standard engine had to go. The new Slingshot X now gives you 400 hp but since that’s a lot of power for a three-wheeled vehicle they also installed a four-speed automatic transmission twinned with paddle shifters, Sparco Seats, sport-tuned suspension, Wilwood brakes and a set of awesome HRE wheels fitted with Continental tires. 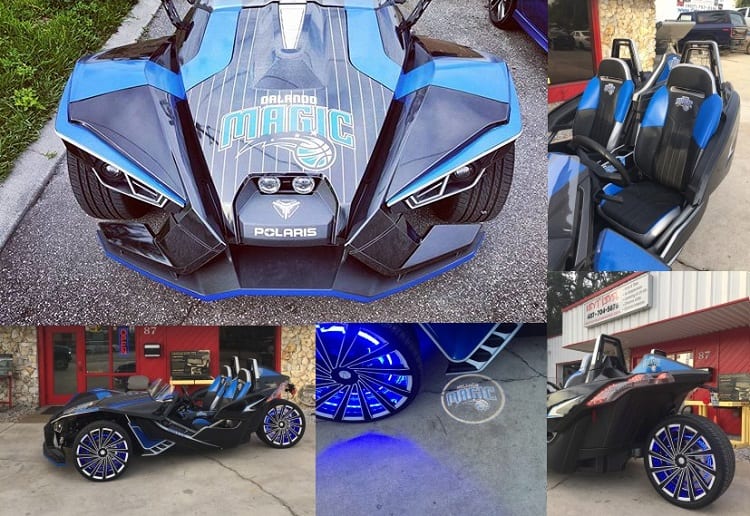 Since most Polaris Slingshot fanatics are located in Florida it was only a matter of time before one of them utilized another Floridian specific thing, in this case, the Orlando Magic NBA team was the inspiration. Of course, the paint scheme changed and to match the NBA team it became mostly blue and black, with new custom stitched seats and an Orlando Magic logo plastered on them. The wheels also got a makeover and got a custom LED lighting kit, topped with a set of cool custom Orland Magic puddle projector lights. 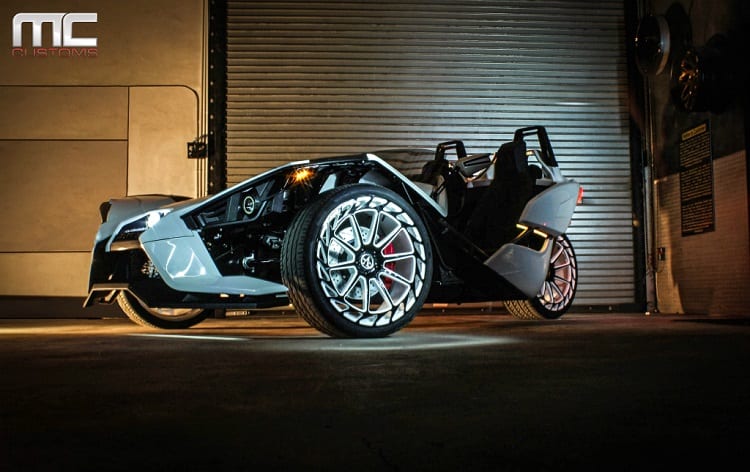 MC Customs located in Miami, Florida are one of the country’s best custom car companies and as the name suggest cars are usually what they work on but they definitely didn’t do a bad job one with this one. When it comes to looks they improve the Slingshot on all fronts and bring it as close to a luxury car as they can. With its minimalistic but amazing styling, it looks like it should be in a millionaire’s garage. What makes this custom build stand out is the use of Vellano Forged Wheels. For this Slingshot, MC Customs decided to install a set of VM31 Monoblock wheels from Vellano, three 22” units with a stunning gloss back and color-matched white finish paint job. 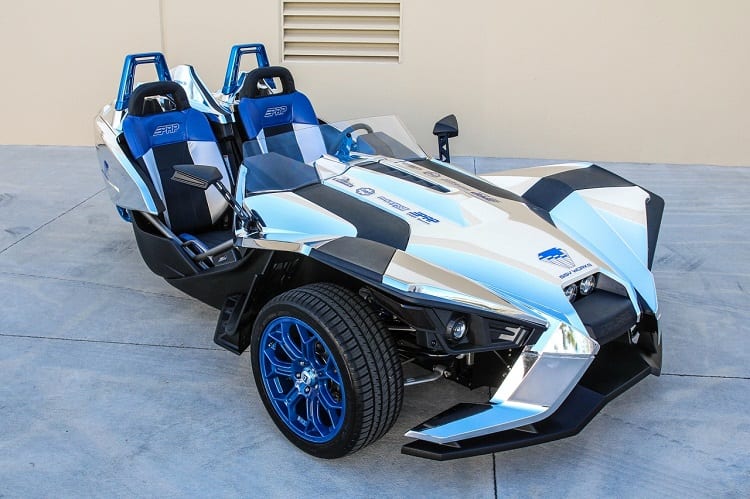 This gorgeous custom build is called the “Silver Surfer” and was made by the already mentioned SSV, which stands for Side By Side Vehicle Works located in a small workshop in Oxnard California. This model has more than just stunning looks. It has two badass 6.7” speakers and dual 10” subwoofers that are behind the seats which are all easily controlled with a Bluetooth Media Controller. In addition, it has TBM racing brakes, Motegi MR120 wheels, a steering wheel and hub from Assault Industries, Michelin Pilot Tires and an amazing chrome wrap from Proline Wraps. 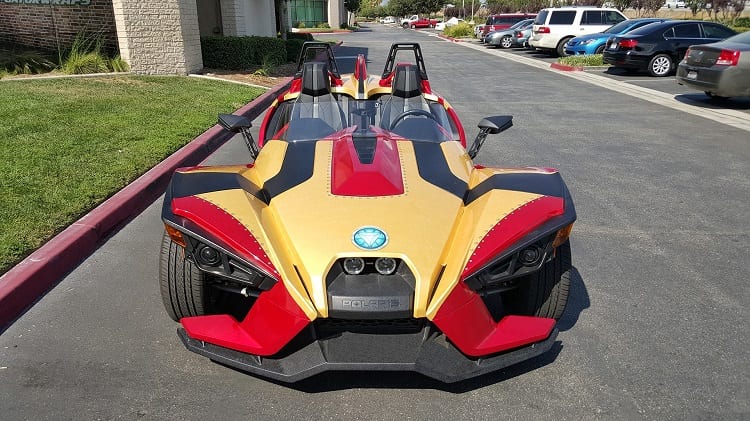 Most custom builds include both an aesthetic and performance improvement, but that’s not a rule. Sometimes changing the looks is all it needs. The Slingshot is already a looker and turns heads but this Iron Man inspired custom build snaps necks. It would have been easy to go the Batman route but we’re glad they decided to go for this and we think they did an amazing job. 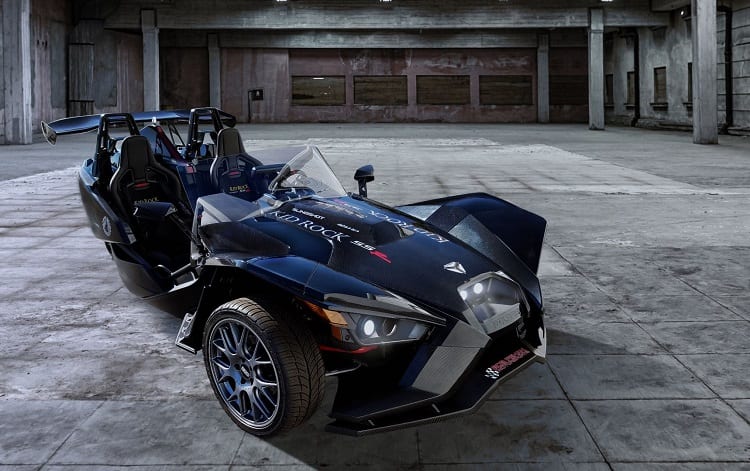 The partnership between Polaris and Detroit’s Bob Fehan Motorsports gave birth to this amazing machine which was for some reason a tribute to Kid Rock. This slingshot got some incredible mods including a fancy turbocharger. The turbocharger system on the “SS-R” is an inter-cooled unit that now allows the Slingshot’s standard 2.4-liter powerplant to give you an amazing 400 hp to the rear wheel. Of course, all that extra power requires some extra engineering so some road-race suspension upgrades were installed to give you an even better riding experience. In addition to all that the vehicle got a baller lighting system, an incredible wing spoiler, and a custom-built carbon fiber body.